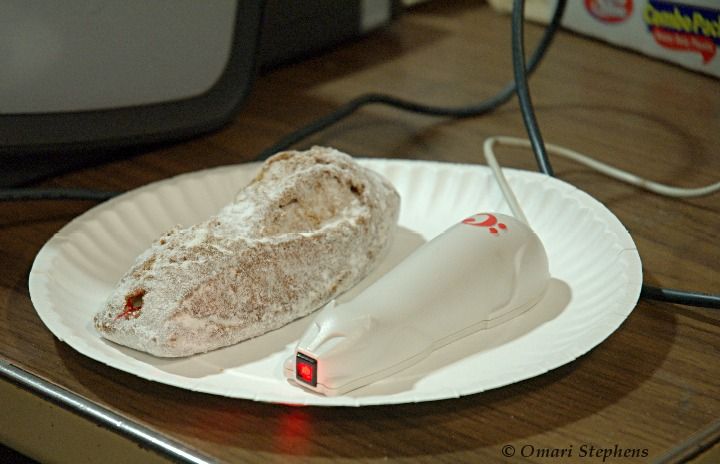 I'm a big fan of technology.  Advances in technology often make my job of messing around, having fun with things, and amusing myself (go harvard comma!) a lot easier.  And, regardless of what happens, the past is so much fun to laugh at.

I shot the above image at the end-of-year APO BookEx in May of 2007.  Exposure is 1/10s at f/4.5 and ISO640.  The donut was mine (and delicious).  The other thing is APO's.  Is it sad that I was considering adding a cat macro to this photo?  Well, if you want me to put this thing on ICHC, come up with a funnyhilarious caption (I tried, believe me).

Anyway, despite being a fan of technology, I'm also a retro-grouch on many counts.  Because, ya know, they just don't make some things like they used to.  My continued use of some antiquated devices notwithstanding, however, there are some methodologies, technologies, and combinations thereof which I have embraced.

Open Source.  I'm fairly confident that without open source, Linux would not be as widespread as it is today.  I am positive that if it weren't for open source mindset, and for the UNIX tradition of combining robust individual tools into a powerful pipeline (of fury), there's no way I could take photos and (soon, hopefully) produce high-quality prints for just the cost of the hardware and paper.  Consider my current (and future) workflow: