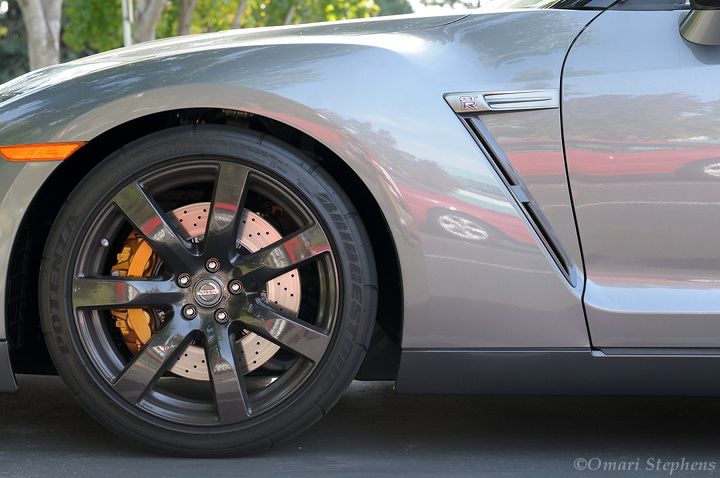 Well, technically, lunchtime Monday.  Anyway, I'm buried under a mountain of a couple thousand photos, and trying to figure out how to improve my workflow to deal with them.  For now, though, here are two I shot right after lunch on Monday.

A couple weeks back, a car passed me while I was starting my nighttime trek home.  It sounded great, and I guessed from the tail-lights that it was a Nissan Skyline GT-R.

On Monday, I spotted the above car parked at the Googleplex.  What initially caught my attention was the size of the brake rotors — one common attribute of cars that go fast is that they don't skimp on the brakes.  This is a Nissan GT-R, which is actually the successor of the Skyline GT-R, and I'm pretty confident that it's the same car that passed me.  Yay for solved mysteries.

With the fall foliage, I've also been thinking about the theme "RGB."  I think this photo does a good job of capturing it, with a fortuitously-located cloud that actually convinced me to stop to take this photo.

Lastly, on Friday night, I went to the Verizon Droid launch party, at Bimbo's 365 night club in San Francisco.  Pictured is the lead singer for Metric, who played and were followed by Silversun Pickups.  It was a lot of fun, the music was awesome, and the crowd was really into it as well.  A couple photos from the concert are here, and hopefully, I'll get more up soon.  Cheers.