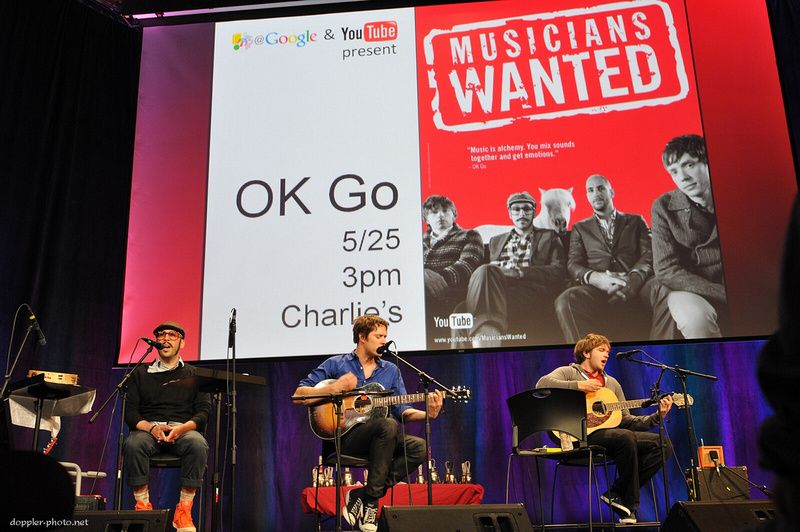 The band OK Go stopped by Google this past Tuesday, May 25, where they played a short concert, talked, and answered questions.  The concert was very similar to a lot of other concerts I've seen at the Googleplex — a couple guys, sitting on chairs, playing some instruments — but at the same time it was unique in a number of ways.

At the beginning of the event, they played an intro video consisting of snippets from a variety of music videos and other sources.  And "they" means these folks.  From what I could infer from the situation, an OK Go video guy was working with the Google video folks to make sure the video stuff went smoothly, and the video folks were coordinating with the audio folks outside of the booth to make sure the audio and video were synced properly.

Another departure from the standard concert was that they offered USB sticks with audio from the concert immediately after it finished (for some value of "immediate"; I didn't hang around to see).  It was pretty cool to see the two teams work together to provide such a different concert experience.

Partway through the concert, lead vocalist Damian Kulash noted that there was a time in most concerts where he asked audience-members to wave their cell phones or other electronic gadgets.  This being Google, he implored the Googlers to wave their laptops, at which point he stepped on top of an amp and put his guitar aside to take a photo.

Amidst a backdrop of laughter, the Googlers obliged.

A little while later, the group played their song "What to do" featuring handbells as the only instrumentation.  An audience-member later asked about the performance during the question and answer period.  After a quick sophomoric moment where Damian noted how the ladies "like [bandmember] Tim's big bells," he also said that the idea for the act was inspired by seeing a performance by The Alchemy Handbell Ensemble.  (Having just watched a performance on YouTube myself, my only words are "wow.")

The band closed with their now-iconic "This Too Shall Pass," most recently made popular by their fantastic Rube Goldberg music video, which was recorded all in one take.  If you haven't seen it, it's well worth the four minutes to watch.

If you're interested in more photos, you can check them out by clicking here.

Until next time, here's a quotation from the band itself:
"Music is alchemy.  You mix sounds together and get emotions."