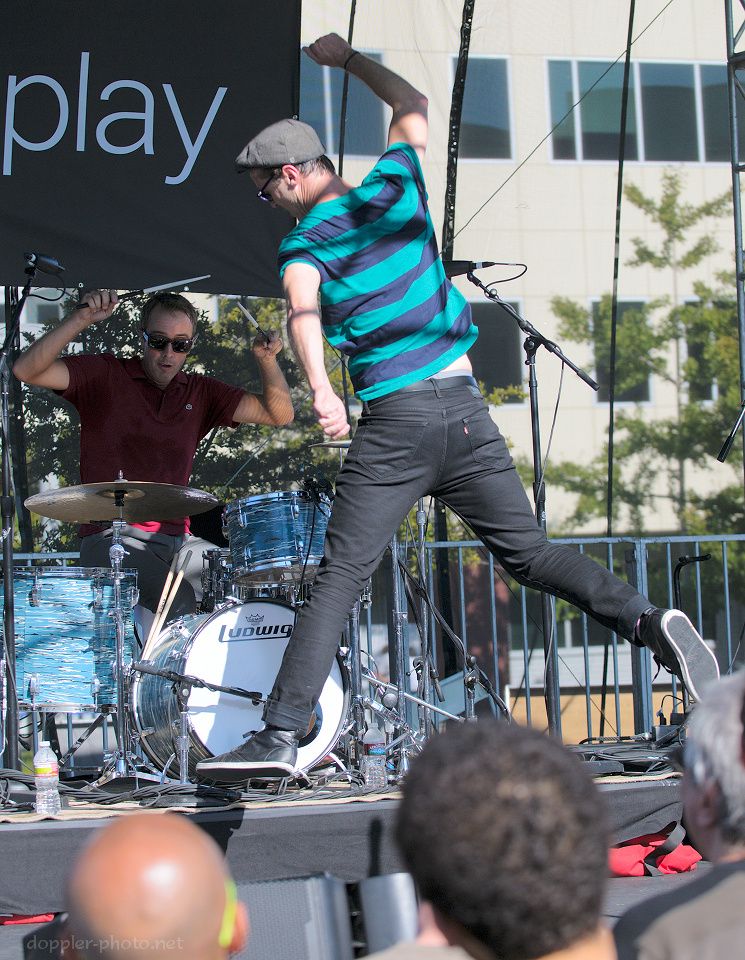 We start near the end, with frontman Michael Fitzpatrick of Fitz & the Tantrums in midair, echoing the motions of the drummer as the concert approaches a crescendo.

The second running of Crittfest, named for its location at Google's Crittenden campus, featured sets by groups White Denim, Dr. Dog, and headliners Fitz & the Tantrums.  As with last year, the concert likely served as something of a tune-up for the three groups, which would perform at the Outside Lands music festival in the days afterward.

Vendors and caterers provided snacks as well as real food.  In this case, Harvey's Donuts brought a machine that made miniature donuts as you watched.  It was basically a tiny lazy river with rotating scoops (in the "up" position in the photo), but using hot oil instead of water.  At the end of the process, people working the booth would douse the donuts in powdered sugar or other toppings and put them out for passers-by to take.

Peter's Kettle Corn showed up and made kettle corn from scratch.  Cesar would pour oil, kernels, and sugar into this 4-foot-diameter cooking pan, and then use a large paddle to stir the kernels until they popped.  The entire pan then pivoted up to dump the popped kernels into a large collection basket, where Peter (presumably the namesake of the operation) would toss some salt on and drop the finished product into bags for people to eat.

To offer a subjective yet completely technical opinion determined by rigorous application of the scientific method, the bag that I ate was omnomnomilicious (that, of course, being the proper term of art; thanks, Karena).

Another researcher independently reproduced my results.  While I have not had a chance to look at his manuscript, casual observations suggest that his conclusions were generally similar to my own.  The scientific method tells no lies ;o)

Now on to the music!  The evening began with a set by White Denim.  The mix was a bit too loud, but the band certainly played it up onstage.  In the photo, frontman/guitarist James Petralli head-butts a cymbal while rocking out with drummer Joshua Block.

Next up was Dr. Dog.  Toward the end of their set, they asked for someone from the audience to fill in on acoustic guitar — they said one of their players was absent.  John (a Googler) stepped up to the plate, and after a quick primer, the show got rolling again.

It was really neat to watch how the band-members communicated with John as the song progressed.  At times, they got him to stop strumming, or change his strumming frequency, all without having practiced or played together before.  It was also interesting to hear John improvise a little bit with the strumming.

Bassist Toby Leaman, one of the two main vocalists, really seemed to get into the music.  He'd swing from yelling to dancing to rocking out and everything in between.

And that was Crittfest.  I always love me some music, and this was no exception.  Until next time… Click here to see the image gallery for this post. Click arrows to scroll. Click any image to jump to gallery