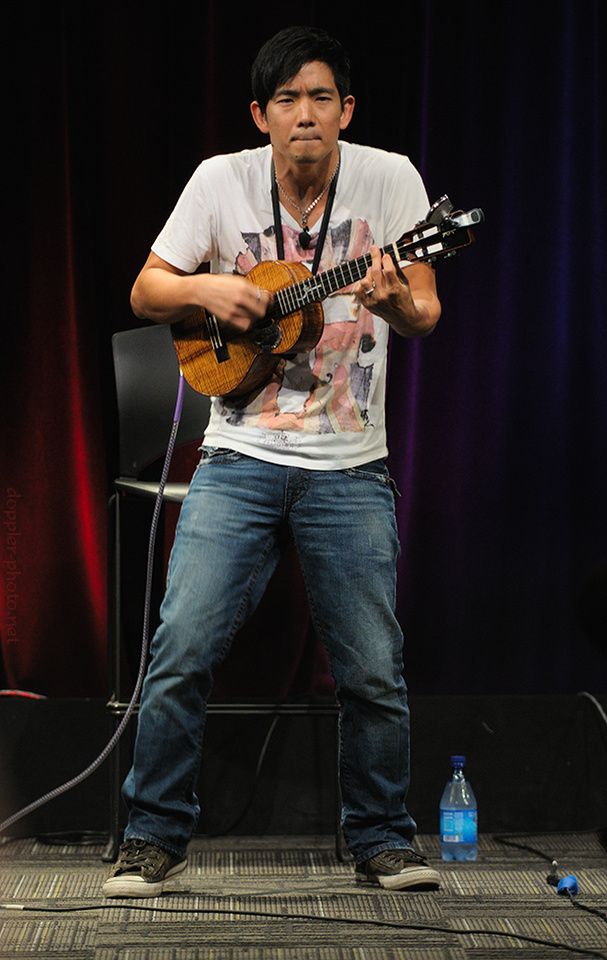 I had the great fortune of watching and listening to Jake Shimabukuro for the second time, a few weeks ago.  Among the first things that strike you about a performance are his intensity and his stage presence.  Whether during a quiet melody or a fast, loud section, there's always this sense of energy — when it's quiet, it's not boring.  But rather, you find yourself holding your breath, waiting for each and every note.

During the concert, Shimabukuro explained that his understanding of stage presence transformed when he saw Bill Cosby present Bill Cosby Himself.  He said that the way Cosby could connect with an entire audience while just sitting in a chair on a stage inspired his confidence in soloing with just a ukulele.

However it came about, Shimabukuro's ability to connect with the crowd is something I continue to admire.  Not only does he continue to create and perform fantastic music, he also continues to inspire large varieties of people to pick up the ukulele and start learning to play.

During the performance, Shimabukuro talked about people starting to play the ukulele.  He surmised that "they pick it up and say 'wow, I can make music!'  And that's the joy that music should bring."  True to form, he demonstrated some of that joy as he smiled while performing Gentle Mandolin, a song that he wrote for his new son.

The effect of that availability is obvious.  At both his prior and this performance at Google, when it came time for autographs, a chorus of people pulled out their ukes and asked for a signature.  In nearly all cases, his was the only one.

Why?  Perhaps the ukulele just seems like a carefree instrument.  During the performance, Shimabukuro noted that "the ukulele is special because people aren't afraid of this instrument; they're not intimidated by it… If you're afraid of an instrument, you're never going to want to pick it up."  By contrast, he described the experience of picking up a ukulele for the first time as being refreshing and relaxing: "it's like a yoga session in one strum."