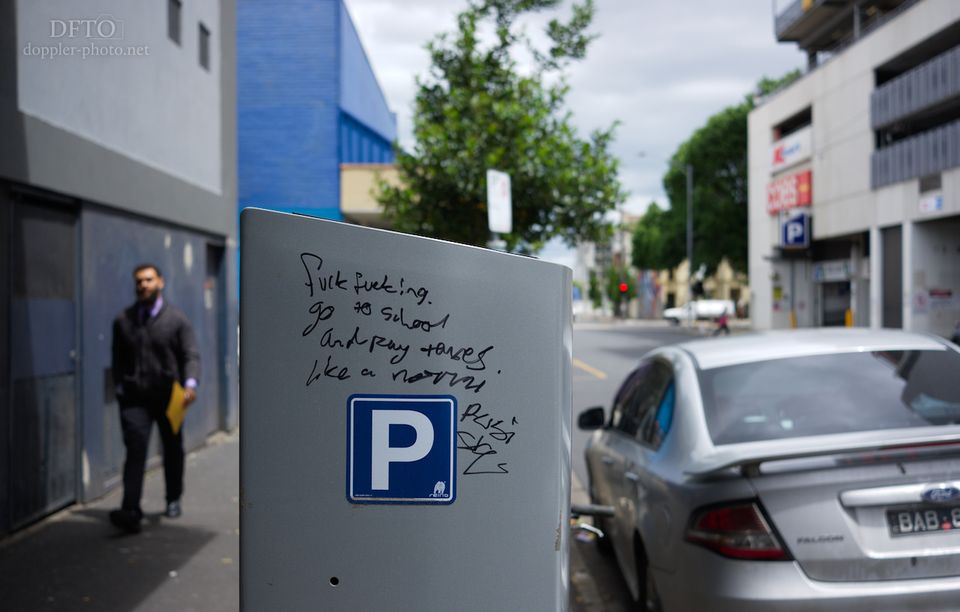 When I was writing my post about the gleaming architecture in Singapore, I felt something that I couldn't quite put into words.  As I sit here writing this now, with the sound of police helicopters overhead, and amidst the turmoil resulting from a murder that didn't need to happen, I think I've found some of the words.

I am a documentary photographer.  My calling is to witness and document people.  And when I document objects, places, works of art, or whatever else, my goal is always to relate those things to the people.  To see them, but also to see their inevitable, undeniable connections to humanity.  It was written and has often been repeated that "Beauty is truth, truth beauty,—that is all\ Ye know on earth, and all ye need to know" ("Ode on a Grecian Urn", John Keats).

I disagree.  Or, at least, I think that is incomplete.  That sense of incompleteness is what bothered me as I wrote about Singapore before, and it's what I finally realized as I start to write about Melbourne (and Footscray, a suburb) now.

Beauty is about people, too.  And it is undeniable that beauty is subjective.  There is no universally-loved piece of music.  There is no painting that everyone in the world adores.  There is no city, suburb, or dirt road that holds a special place in every person's heart.

And yet, when the siren song of gentrification comes a-knockin' suddenly we forget that.  That song generally comes in three-part harmony: beauty, cleanliness, and comfort.  We only want to clean the place up a little.  We want to restore the beauty of a place that has clearly seen better days.  We want to help people feel comfortable and safe again.

But all of those judgments are subjective.  The value of diversity in the human experience is the ability to cater to those different subjective judgments of beauty, taste, cleanliness, comfort, and belonging.  And an aggressive shift toward one standard of beauty will inevitably sweep some people under the rug.  It will steal their home.  It will replace the things and places they love with a place that no longer loves them back.

While doing research for this article, I read that Singapore's street art is aggressively policed by the government, and that forms of non-approved art, like graffiti, are aggressively punished (such as by caning).  A travel blog noted this, but pointed out that the street art in Singapore was among the most beautiful they had seen around the world.

There lies the rub.

Reading that is what finally helped me to name what had struck me about Singapore's gleaming architecture, wondrous glass-covered skyscrapers, and spotless streets: the sense of humanity was gone.  There were people there in the moment, but in another moment, you might never know.

It was as if Singapore had pursued cleanliness at all costs, and had scrubbed so frantically and so continuously that they erased all signs of the lives that people had lived, or were living, in those spaces.  It was as if they had replaced actual people with a government-sanctioned suggestion of what people might be like.

What I've always loved about ad hoc street art is how simple and genuine it can be.  These hearts have so much feeling.  They remind me of the love that exists in the world, and of the bittersweet tale of love and tragedy that feels so human.  They remind me of the joy of creation, and the sadness of those creations deteriorating over the course of a lifetime.

Sometimes the serendipity of a piece of paper on the ground, in just the right spot, can feel like alchemy.  Trash plus sidewalk is somehow art.  Paper white and dingy gray somehow fit perfectly together.

For me, there is also beauty in the impromptu humor of painted-in-black graffiti being corrected with red paint.  In the irony of someone painting "Some of these kids!" on a wall.  I love the interplay that sometimes develops in graffiti over time, and the stories that I get to discover by way of those interactions.

And I also love the sense that a piece of government-approved art has been lived in.  That it was installed, and that people have interacted with it; observed it; witnessed it; and left a piece of themselves in that place.  To borrow the chorus from Jason Aldean's hit song:
It sure left its mark on us, we sure left our mark on it
We let the world know we were here, with everything we did
We laid a lotta memories down, like tattoos on this town
("Tattoos on this Town", Jason Aldean)

Those tattoos are what felt so absent in Singapore.  And they're what always feels absent when gentrification erases people and culture and the beauty that already existed, with emptiness.

And, of course, there comes a point where there's no replacement for being able to express yourself in your own way; no replacement for being able to leave your own mark on the place that has always been your home.  There comes a point when none of the approved messages fit anymore, and when the approval itself is an inherent indication that the message could never fit.