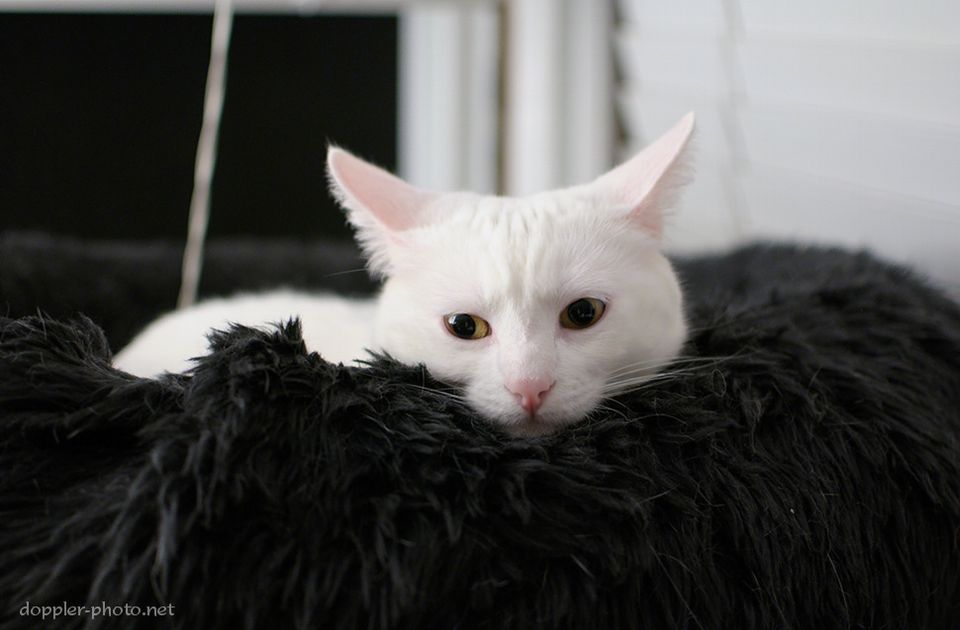 Despite being a significant consumer of lolcat photos, I had never had a good opportunity to take cat photos myself.  Recently, such a chance presented itself and I started shooting.

At the house of a friend's friend, there are three cats: one older cat and two new kittens.  When I was there, the three were still having periodic scuffles to establish a pecking order.  Above, the older one sits in its customary lounge corner, ready to close its eyes near the end of the night.

The old cat and the adventurous youngster make eye-contact after the kitten climbed my friend's recently-deposited backpack.  This white kitten was the most energetic of the three, constantly jumping on whatever it could, climbing when it couldn't jump, investigating the unfamiliar people in the meantime, and keeping a close watch on the bird toy all the while.

It also knew how to put its claws to good use, as one person discovered.  He was holding the bird toy, and the kitten tried to climb his jeans to fetch it back.  Ouch…

Kitten number two had brown and black patches.  The older cat quarreled incessantly with it when their paths happened to cross.  Most of the time, though, this kitten could be found under this blue-and-white chair skirt, peeking out and grabbing at the bird toy when it came near.  The older cat would occasionally pad around the chair, growling or hissing, but it never tried to go under as far as I could tell.

This is my friend, a traveler beset by kittens.  Cool cat that he is though, he fit right in.  As for the kittens, they played with each other frequently, and would sometimes follow each other on excursions behind the couch and across people's laps.  Every once in awhile, they'd have a quick game of tail-nibble.  And at the end of the night, they shared a trip in a kitten carrier.

'Tis all for now.  Until next time, "worship the kittens! be curious!" —manveru