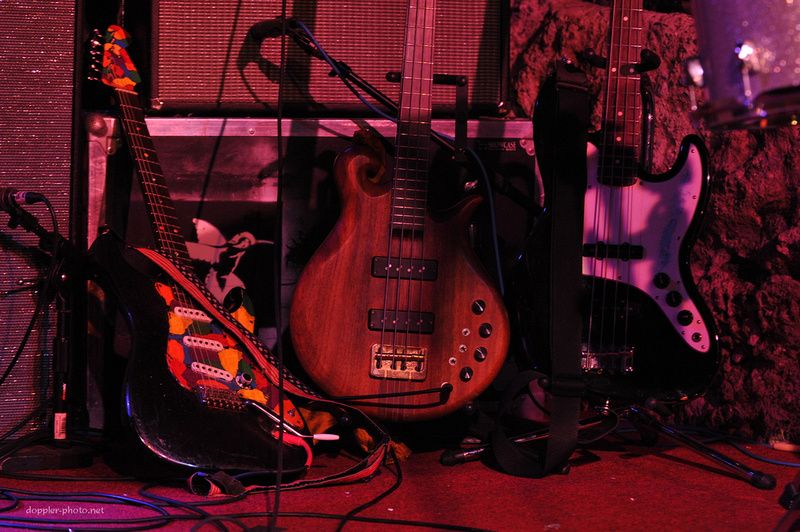 My friend Raphael "Raffi" Peterson is a bass guitarist.  Back in late 2008, I went to watch his band, Dizzy Balloon, perform a Thanksgiving concert.  As I wrote at the time, it was insanely awesome.

A year later in 2009, I went to their concert Thanksgiving Extravaganza II: Second Helpings.  It was less insane but still awesome.  Looking back now, it's interesting to see how their interactions with the audience changed during that year.  As I noted then, "the interactions were generally more subtle but were definitely still there.  It was clear that folks in the audience enjoyed themselves."

Now, 9 more months have passed.  A subset of Dizzy Balloon has now started a second band, Man in Space.  Most recently, I went to their EP release concert, at Bottom of the Hill in San Francisco.

After the concert, I asked Raffi about the main differences between Man in Space and Dizzy Balloon.  His response was pretty straightforward: Man in Space is about the instrumentation.  There's no front-man; everyone sings and everyone plays.

They shuffled the instruments a bit as well.  Louie Diller, the drummer for Dizzy Balloon, is now on keys.  His brother Martin (pictured above) is on drums.  Jules Leyhe joins Jonny Flannes on guitar, and Raffi remains on bass guitar.

They switched instruments a bit during the show as well.  Peter Labberton (an extra player?  I'm not sure) spent much of the night rocking on a synthesizer, and swapped with Raffi for a couple songs as well.

Raffi had mentioned that they played many more instruments for the recordings than they had hands for during the concert, so I presume Peter helped to transform their recorded sound into a live performance.  Whatever strings they had to pull and compromises they had to make, though, it definitely worked.  The concert was fantastic.

As I've watched and listened, it's become increasingly apparent just how much the band members simply enjoy music and dedicate themselves to music and to performing.  About forty minutes after the concert ended, I found Jonny curled up in a back corner of the stage, playing quietly to himself.

By comparison, a couple months ago I saw a band playing while eating out with some friends.  Ashton, rock guitarist and lover of all things metal, watched the band for a short while and lamented, "they're only in it for the money."  And I could see what he meant — the players had no energy; they were playing their instruments but showed no signs of being invested in the experience.

Both Man in Space and Dizzy Balloon have been exactly the opposite.  Every time I've seen them, the energy in the house has been nearly palpable, and I love it.  Keep rockin', my friends.  Keep rockin'.

You can find more photos here.