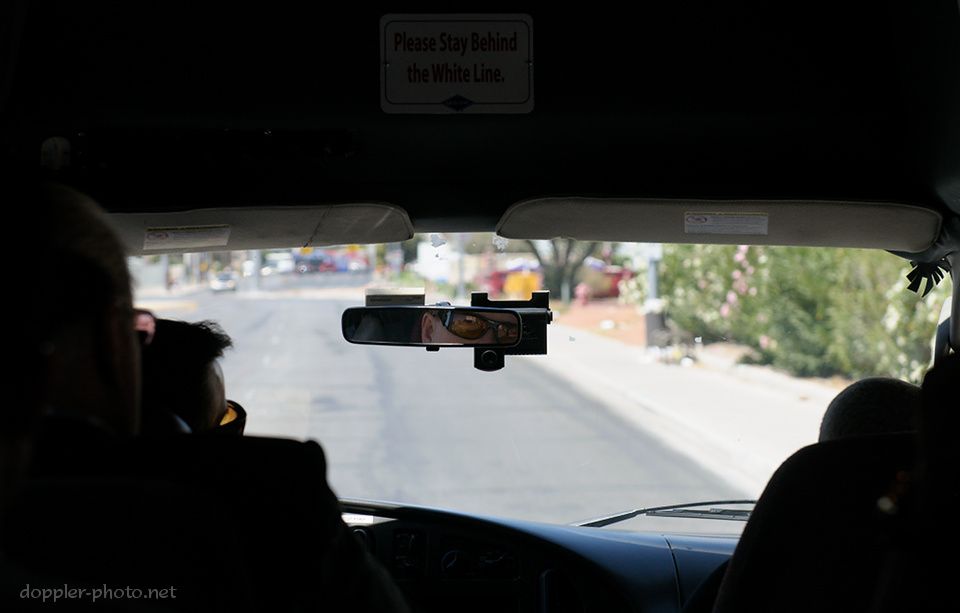 Vegas seemed like a culture built on service.  The variety of service-people was amazing, and I was also struck by their sheer abundance.

As mentioned in one of the prior posts about Vegas, we took a shuttle from the airport to our hotel.  The driver offered a couple tales of the histories of various hotels we passed on our way to Aria, the very last stop on the ride.  Above, the driver is seen in the rear-view mirror as he takes a right-turn to pass a hotel under renovation.

This was in the lobby to the Bellagio; the butterfly atrium was off to the right, behind this wall.  I really liked the juxtaposition of the man's posture and red coat next to the large red painting; both hanging there, waiting...

Note only was there an abundance of people watching and waiting, I was surprised at how many of them were wearing an inconspicuous earpiece like this guard (I presume) at the entrance of a jewelry shop.  It made me wonder if there were really that serious of a constant threat of theft or other liability, or if there were some other motivation behind it.

And another, also with the earpiece.  These are pillars of ice on the right.  The cores are chilled, so they form interesting shapes as they very slowly melt in the ambient-temperature air.  I was taking photos of the reflection of this fascinating wooden structure in the distance when the man left his post to come over and stand off to the left here.

I wasn't sure why he had approached or what was happening, so I kept shooting.  Eventually, a custodian came over to wipe up a small puddle of water that had spilled from the reflecting pool.  Who needs "Wet Floor" signs when you have an abundance of people?

It seemed that most of the people whose primary role was to interact with people were those employed by the casinos and hotels.  Here, one of the people in the lobby of our hotel, Aria, offers an expedited check-out service where guests can view and approve their bill from an iPad, at which point a paper copy of the bill and receipt is sent by email.