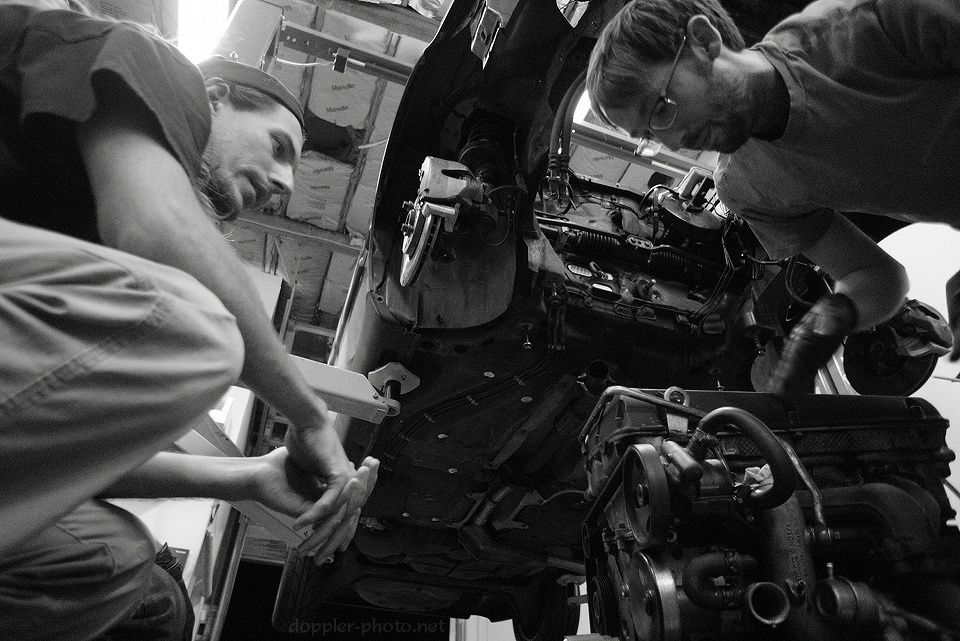 Jerrit (left) and Andrew consider engine replacement plans after we dropped our unhealthy engine from the car.

So, we haven't had any luck getting our salvage engine to run right, and after swapping most bits with mostly-known-good parts, all signs pointed to issues within the engine block.  We finally did a compression test and the results explained everything we've seen.

A bit of background.  In a four-stroke engine, the air/fuel mixture is compressed prior to the spark plug firing.  For the engine to run properly, each combustion chamber needs to maintain a certain amount of pressure during that "compression" stroke, and a compression test measures how much pressure is actually built up.

The manufacturer specifies some minimum level of pressure that the cylinder should hold.  A healthy engine will be above that threshold.  An unhealthy engine will be at or below the threshold.  In our particular case, the minimum compression spec for our engine is 145 PSI.  During the compression test, Jerrit measured a max of 120 PSI in each of the four cylinders.  Suffice it to say that nearly 20% below the minimum isn't really ideal…

So if you've been reading along, you'll know that this engine smokes up a storm.  Given the compression results, this makes perfect sense.

More background.  The piston moves inside the cylinder, and metal piston rings form the seal between the piston and the cylinder walls.  There are three rings per piston: the top two (closest to the combustion chamber) maintain compression, and the last one helps spread oil along the cylinder walls, for cooling and lubrication.  In our engine, the compression rings clearly aren't doing their job.  As a result, (1) we're losing compression, and (2) large quantities of oil are ending up in the combustion chamber.

Solution?  Another new engine.  In theory, we could do a rebuild and replace the piston rings, but this engine had a guarantee of some sort, so we're swapping it for another one.  Earlier tonight, we dropped the engine out of the car, split it from the transmission, and started removing bits that we had put on it during the install.  Within a week, we should have a third engine on our hands.  Will it fix things?  Hopefully, but only time will tell.