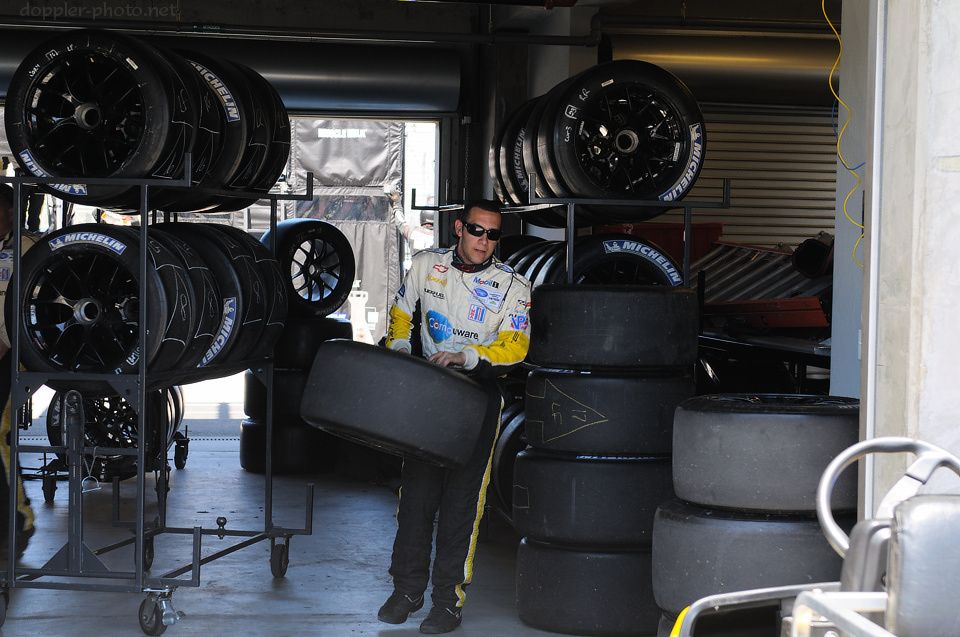 Recap: Back in May, I shot my first professional car race, when the American Le Mans Series (ALMS) visited the Laguna Seca racetrack for a 6-hour endurance race. After having spent untold hours of my life watching the races on TV, it was an amazing experience to be there in person, watching the cars fly past and seeing the drivers make impossibly close passes (though some of the passes actually were impossible; oops :o). Also, the sound… oh, man…

Michelin, Dunlop, and Yokohama were all out in force, bringing multiple 53-foot trailers apiece, filled back to front and floor to ceiling with tires.  Beyond that, they had entire assembly lines of people to actually mount the tires on rims that the teams provided.

Another thing I realized: this really was a family event, in more than just rhetoric.  I was completely taken aback by the number of younger and older race fans I found all around the track.

Watching a race in person is a very different experience than watching it on TV.  On television, the announcers keep you abreast of all the goings-on around the track, taking you through the different battles for position, and offering some tactical and historical context to boot.

In person, it's a much more visceral, direct experience.  You have less context, but your senses are heightened every time you do see something interesting.  In this case, the #56 BMW spun after The Corkscrew and ended up halfway into the left-hand-side sand trap.

I practically had my fingers crossed as the driver escaped the sand and got back on the racetrack — The Corkscrew is basically a blind corner, and if a big collision were to happen, there's a real possibility that projectile debris could end up flying toward you.  Thankfully, the flaggers were on it; you can see the yellow "caution" flag being displayed in the top-right corner of the photo.

Another aspect that's hard to judge on TV is the sheer scale of the track.  When cars are turning lap times under 1.5 minutes, and there are video cameras at most corners and on a bunch of the cars, it can be easy to forget that it'd take 20+ minutes just to jog the perimeter — it's a big place.

The view in the photo covers about one-third of the track, from turn 1 on the right in the distance to just before turn 5 at the left side of the frame.

You find nifty little vignettes in all the weirdest places.  I think I've ended up with at least one cool bird photo from most of the car things I've shot.  With all the action on-track, it's always nice to find a little bit of serenity every once in awhile.  I like the colors in this one, with the wisps of cloud in the background.

And you also find vignettes in some of the expected places.  With paddock access, you can stand right behind the hot pits, about 7 meters from where the pit crews are busy fueling and yanking wheels off of the racecars.  Most of the closed-cockpit cars have built-in hydration systems, so it was interesting to see Puerto Rican driver Ricardo Vera rocking the high-tech straw-in-water-bottle technique.

And then at the end of the day, you get ready to do it all over again.  This is another aspect of the race that you rarely see on TV.  Here, some mechanics for the #55 BMW rock out to music while pulling the race wheels off of their car.  Afterwards, they would clean the exterior of the car a bit before loading it in a trailer later that evening. Click here to see the image gallery for this post. Click arrows to scroll. Click any image to jump to gallery