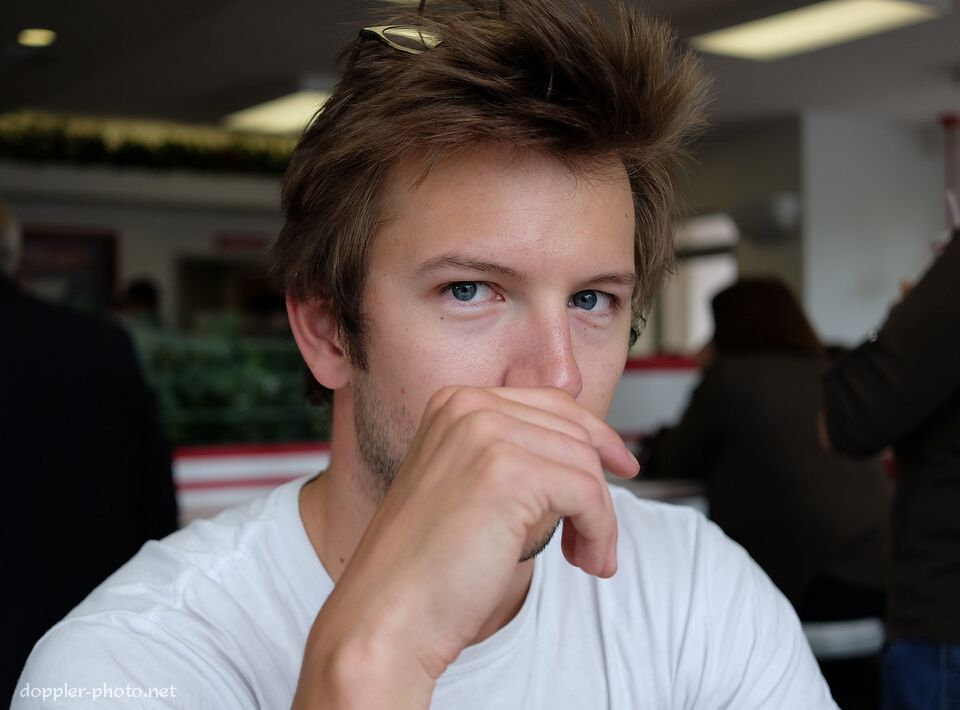 On Friday (2 days ago), I took delivery of a new Fuji X-T1.  Much like my original receipt of the NEX-7, it was a transformative experience, and within the first 24 hours using the camera, I had shot images in situations that would have been near-impossible with the NEX-7.  This post will include some representative images that I've shot with the camera, as well as comments on why each one is included, how I shot the image, and which features of the camera are relevant to that image.  All images are JPEGs from the camera.

I shot the opening image, this one, and the one below all at In-n-Out, maybe two hours after getting the camera.  I really like the colors and tonality.  I like how the light falls off dramatically in the distance.

Another In-n-Out shot.  This focal length (40mm-equiv) is new for me as well; I usually shot 29mm-equiv with the NEX-7.  I like the compression, but it's a little tight for the kinds of "friend sitting across table" portraits that I like to do.

Kind of a dynamic range test shot.  Works for me.  I focused on the chair arm, and that was pretty snappy.

Evening low-light shot at base ISO.  Tones are coming out nicely.  I was able to autofocus on the tree silhouettes without a problem.

I was planning to walk around Palo Alto Friday night, just to see how the camera did in actual low-light conditions.

First stop: Pizza My Heart.  This was when I encountered the first major interaction bug: the exposure compensation dial is ignored whenever a shutter speed and an aperture are both explicitly selected, even though I still had auto-ISO enabled.  That's why this shot is so bright.  So the camera would peg the ISO, looking for a 0EV exposure in a dark environment, when what I really wanted was for it to aim for -2EV or -3EV.

Once I finally figured out what was going on, I recalled that another person had mentioned this exact problem in a review.  *sigh*.  I guess it wouldn't be a camera without ridiculous bugs.

If you're actually shooting in low light at wide-open aperture, there is a workaround.  Just flip to auto-aperture.  The camera will conveniently pick the wide-open aperture again, but this time, it'll actually pay attention to the exposure compensation dial.  *sigh*

At this point, I was playing around with the shutter speed, en route to discovering the exposure compensation bug.  This works okay as a high-ISO test shot, though.  3200ISO, and the stubble on his chin is fairly sharp.  Plus you can see the individual strands of hair on his head (in the highlight).  Works for me.

This was more of a focus test than anything.  I used autofocus, trying to focus on the person in the distance.  In practice, the camera actually focused on the second-to-last table, in front of the person, but that difference is invisible at reasonable focal lengths.  This was where the dual-view thing really came in handy.  I was able to quickly check a magnified focus box and hit the shutter without having to check focus, then zoom back out to make sure my composition was okay.

I'm really happy about this shot.  I mean, it's not good, but it's a reaction shot where I noticed, focused, and took the photo quickly.  The NEX-7 wouldn't have handled this situation, especially not with the speed and aplomb of the X-T1.  The X-T1 nailed the focus, even with the sweeper surrounded by reflected highlights, with a lot of contrast in the background, and with similar tonalities between the sweeper and the floor and everything around him.  Well done.

This was another quick shot that worked out pretty well.  I had paused for a moment to take one shot, and then I continued walking as I took this shot.  Focus is on, and there's plenty of image detail at 3200ISO (another impossibility with the NEX-7).

On a side note, I'm really going to have to practice this shot, because I really like how the background is motion-blurred because of the camera motion.  The trick is that you have to keep the camera pointed in exactly the right direction (which direction changes as you walk), plus you have to match your shutter speed to your walking speed so that the subjects are acceptably sharp, while the background gets a nice blur.  Excited to see where this goes.

Another quick shot.  I think the camera focused on the kitchen, but that's good enough here.  I really like the silhouette.  I really like how much dynamic range I'm getting at 3200ISO.  Keep in mind that in addition to more noise, you tend to get less dynamic range as the sensor sensitivity is pushed.  I also like the tonality here — the floor reflection combines the shape of the silhouette with the general color palette of the rest of the image.

That said, you're definitely starting to see some signs of aggressive noise reduction in the OOF areas off to the left and right of the image; especially in the napkin-holders and tables to the far left of the image.

Nice colors, sharpness, and dynamic range at high ISO.  Look how the green trees came out on the far right.

More colors and dynamic range.  Really low-key image that I accidentally shot as I was picking up the focus distance from the floor.

Pro tip: that's an easy way to set up zone focus when you don't want to put the camera to your eye.  Just make sure you're standing on something with lots of contrast and trigger AF on the floor.

Really quick no-look reaction shot.  Didn't pick up the focus in time, but I think the sentiment is good enough that the image can still work in context.  Also, I'm apparently really bad at keeping the camera level for my no-look shots :o)

Another no-look, another crooked horizon, although it kind of works here.  Camera nailed the focus (without me looking through the viewfinder at all).  Exposure is where I want it (I was shooting auto-shutter-speed).  Composition kind of worked out.  I'm pretty happy with this, and it's another shot that the NEX-7 wouldn't be able to match.

Shots in outdoor bright sunlight.  Really like the colors and contrast.  AF was easy and pretty quick.  Even though my lens doesn't have the standard built-in aperture ring, switching apertures with the rear dial is easy and matches my DSLRs.  For people who care, the mapping of which dial is aperture and which is shutter speed can be flipped in the settings.  As can manual-focus-ring rotation, for that matter.

Backlit portrait with some light from above.  Happy with the skin tones and depth of field.  Really happy with the sharpness.  AF was again dead simple, even though the subject's face is in shadow and there's brighter stuff in the background.  This was right around base ISO.

We can rebuild him!  The same as before, but this time with a non-destroyed turbo.  I love this really strong silhouette, and the camera focused on the silhouette edges in a snap.  I'm again really happy with how this came out, and setting up the silhouette was super easy — twist the exposure compensation dial to -3EV-ish (which the EVF will reflect) and fire away.

Again, I'm also loving the dynamic range — the touch of rim light on the sockets is what makes this image, for me, and I really like how those highlights attract my attention, and then when I look closer, I can make out the silhouette of each one. All told, I'm really happy, and looking forward to shooting lots more stuff with this sucker.  Whee! :o)