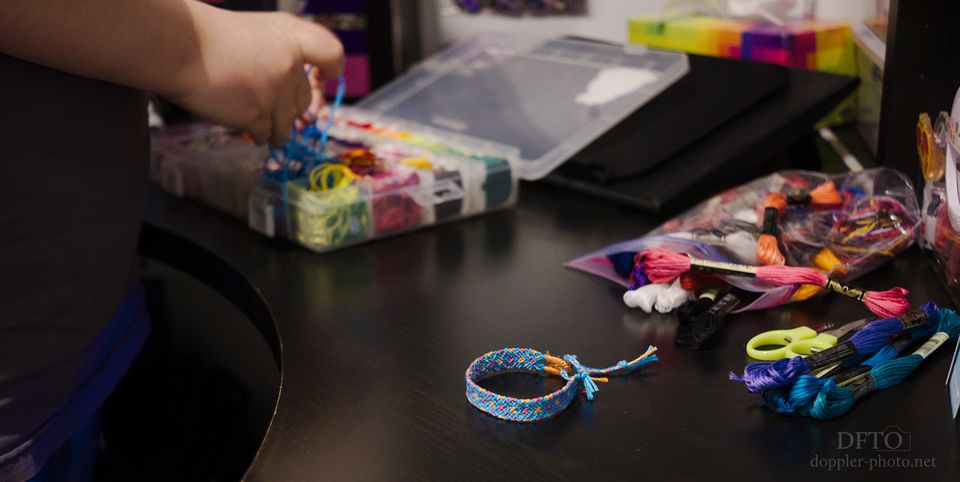 One of her parents recently quipped, "Is it the same box?" It's funny how such a short question can hint at a story that spans an entire lifetime.

Like so many experiences with macramé knotting, my friend Mara's story began with friendship bracelets in summer camp, when she was around 10. But unlike so many, it didn't end there. "I learned when I was a kid, but kind of kept doing it…"

Instead, a thread that started in Richmond, VA, and that stretched through nearly 10 years in Japan, now carries on in her current home in Australia.  After having the opportunity to watch her at work, and to talk a bit about her relationship with the craft, I found that Mara shares a number of traits with other life-long artists that I've known over the years.

The first is that by this point, her art form is just another part of her life. It's special in a way that's similar to a long-term friendship that doesn't need constant attention and energy to maintain. She told me, "I've always just kind of had a box [of knotting yarn]. I don't always do it, but it's always been an option, and it's something that I kind of rotate through."

She also mentioned that the basic actions are so ingrained in her muscle memory that she can work on pieces while she's focusing on other things. When I asked, she estimated that a typical bracelet would take around 5 hours, if she worked on it straight through. But she typically doesn't. Instead, she tends to just keep in-progress pieces handy, and will get into a flow during periods of downtime. "[It's an] easy craft to do while you're doing something else." But then life will often intervene. "At some point I'll have to eat… I'll have to do laundry…"

I asked Mara whether she felt that it was more of a solitary or a community pastime, and she responded that the answer has changed over the years. When she has the downtime to work while she's out and about, it can help to foster a sense of local community. "People recognize it, or they'll ask me what I'm doing, and they find it really interesting." "It's more communal for me in that aspect; and they laugh or they relate because they did it when they were a kid."

The sense of global community is relatively recent for her, though. She told me that earlier on, "I wasn't aware that there were big communities of these people who made these bracelets." But, "[that's] changed because of the Internet."

When she got to Australia is when Mara first discovered websites that were devoted to bracelet making. She told me that that was when she "discovered people who took it beyond the level of crafts."

Similarly to other mostly-self-taught artists, Mara told me that she had initially started off improvising, but has more recently been focusing on her ability to read and follow existing knotting patterns.  She envisions it as a foundation that would help her to be more creative down the line.  "As I'm working on patterns, I'm trying to keep myself from improvising." "But before I discovered [the communities on] the Internet, it was all improvisation."

For now, though, she told me "I'm making sure I can read a pattern first." Fundamentally, it's like the difference between being able to only speak a language fluently, versus also being able to read and write. Being literate doesn't necessarily improve the level of your art, but when your community isn't always within earshot, using a shared written language often makes it easier to convey your own ideas, and to understand other people's ideas.

I've often found it interesting how peoples' sense of creativity interacts with their sense of improvisation. I had asked whether there were any common stylistic themes across various art disciplines that Mara had tried ("if there's an art form, I've probably dabbled in it…").

She initially described herself as "a creative person, but not quite creative enough to be original." Later, on the topic of mixing improvisation with established patterns, she told me "[I've been] experimenting with seeing what sorts of designs I find interesting. But then, yeah, trying to figure out how to mix them."

It's a pair of sentiments that might initially seem at odds with each other, but the combination feels incredibly familiar to me. When you practice an art form for long enough, it becomes difficult to judge when something is good or not.  And when you have full creative freedom but no structure, it can feel like you don't know which creative directions are worthwhile, and which are a waste of time.

In essence, creativity is not just having the ability to try new things, but also having the value structure to know whether it was good or not.  Creativity is the sense that the new directions are making (or will eventually make) the output not just different, but better.

A consequence, that I've both heard from other artists, and have also found in my own work, is that rules can both inhibit and enhance that sense of creativity. And conversely, a lack of structure can facilitate creativity, but can also inhibit it.  Having the right structure around a task can help an artist to distinguish when they did something well versus poorly.

So it feels natural to me that someone might not feel their most creative until they can read, understand, and work within existing rule structures.  How Mara put it was that "crafting with a set of rules and a defined product is a really nice thing for me to be creative without having pressure to be creative."

That is, I think, that being able to use improvisation to help accomplish an established task in a novel way can feel like a creative accomplishment, and can help guide further experimentation and improvisation, without requiring the artist to also devise and motivate an entirely new value system.

When I asked about future goals and aspirations within knotting, Mara cited ideas that came from the newfound global community. "Biggest goal: working on openings and endings. Those are structures that I've never done before."

She gave me a quick primer. At the high level, openings and endings are related to how each piece begins and ends. But it's also deeper then that. She explained that "essentially, it's thinking about how [the piece] is going to be worn." The right designs of openings and endings can start to add function to pieces that, for Mara, have only ever been aesthetic.

"I've seen people do, essentially, giant bracelets that are big enough to be pouches." As I listened, she continued musing on whether she might add that style to her repertoire. "If I can get those finishing bits really good, I guess I could try."