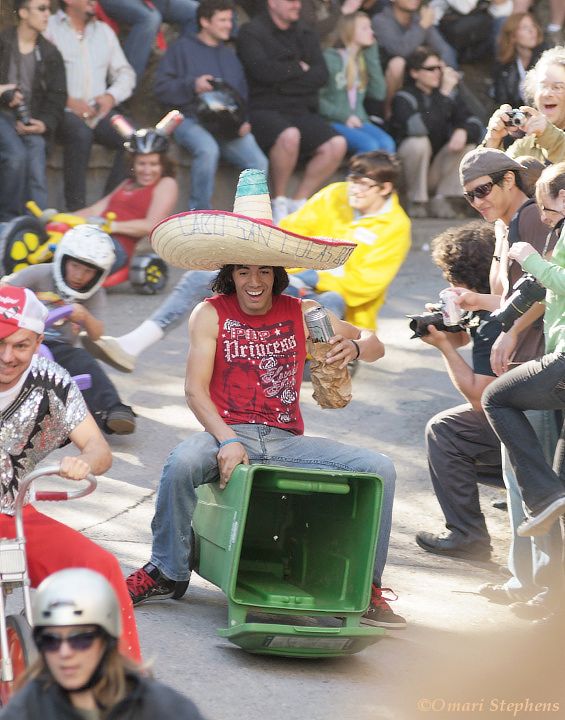 Hi again.  I have a massive backlog of photos, but I hope to deal with this by sleeping less (just like school!).  Hopefully, I'll also be able to maintain an abnormally high posting frequency as I work through them.  And writer's block shouldn't be an issue since I generally try to avoid sleeping in critical sections.  Anyway, enjoy!

Bring Your Own Big Wheel is a ridiculous event.  Nominally, you somehow procure a big wheel, and ride it down a steep, twisty hill repeatedly.  No rubber tires allowed.

In practice, though, people took anything and everything that could roll, slide, or be carried down, and had a blast while they were at it.  I mean, there were plenty of mangled, store-bought big wheels, but people also brought homemade three-seaters, wheels attached to milk crates, an office chair, a water cooler, and a saucer sled.

Oh, and let's not forget our friend with the trashcan.  He did an admirable job of wrangling it down the course without hitting things, or scooping up anyone else.  Also, since trash cans don't have a steering wheel, he obviously needed some other way to occupy his free hand.  And there you have it.

As trashcan dude demonstrates, most people steered either partially or completely by using their feet as outriggers.  Some of the faster folks also used their hands (with gloves) on the ground.  Of course, in many cases steering didn't happen at all until after folks bounced off of the curbs or off of each other.

Of course, you can only really rock a big wheel with a rockin' getup.  Fortunately, the attendees knew this.  Gumby? Check!  Pokey? Check!  Pair of Roman guards wearing armor, chain-mail, and tightey whiteys and sitting on Razor scooters?  You betcha!  (I'll simply describe the effect of watching one of these Roman characters "streaking" toward me while straddling a 3-inch-wide seat as "blinding.")

The crashes were pretty much continuous.  People would sometimes crash and stop, but more often they'd crash, pick up a partner in crime, and keep hurtling down the course.  I'm not sure what sort of steering technique the impromptu pair in the middle was using, but they very nearly gathered a third compatriot.

Oh, I should mention: the big wheels were pretty amazing, but a number of people went the extra mile in decorating their various steeds.  For instance, the guy on the left with the overflowing beer had a sticker on the front of his ride that inspired the title for this post.  That's right, Kix: step aside!

Another big wheel that I really enjoyed was ridden by what I can only describe as an NHRA Nun.  I don't think she needs any extra explanation, so I'll just repeat the things she wrote on her big wheel: The Holy Trinity: Traction, Torque, & Tarmac.  Take life by the handlebars!  If you can read this, I just ran over you!  I don't need drugs, I have a big wheel.

Hey there, Bullwinkle!  Clearly, though, Bullwinkle used a little too much of his "mighty moose muscle" in the moments leading up to this most stupendous failure.

Join us next time for "Bullwinkle falls flat on his butt" OR "Having a wheelie good time"!

It's a little known fact that the the Autobots have a relatively lax definition of "auto."  In times of peace Optimus Prime sometimes goes cruising on 3 wheels instead of 10 or 18.  It's a good thing there weren't any Decepticons in attendance…

Not all of the drivers were as calm and collected as Prime, however.  I'm not exactly sure what was going on here, but it couldn't have been good.  All told, though, the Team Gaucho Hot Wheels was among a small percentage of the vehicles that made it home in a relatively small number of pieces (possibly one; I don't know if the hood was attached before or not).

The end of this year's Bring Your Own Big Wheels seemed to arrive all to quickly.  Despite that feeling, though, there was quite an incredible amount of carnage.  Many of the big wheels were donated to a local fire station after the event which is likely going to pick through the rubble, find some still-working parts, and fix some new big wheels for local youth.

With any luck, the event will be back next year for more crazy Easter madness.  And to borrow some fitting words from racecar (yes, it's a palindrome) driver Mario Andretti,
"If everything seems under control, you're not going fast enough." 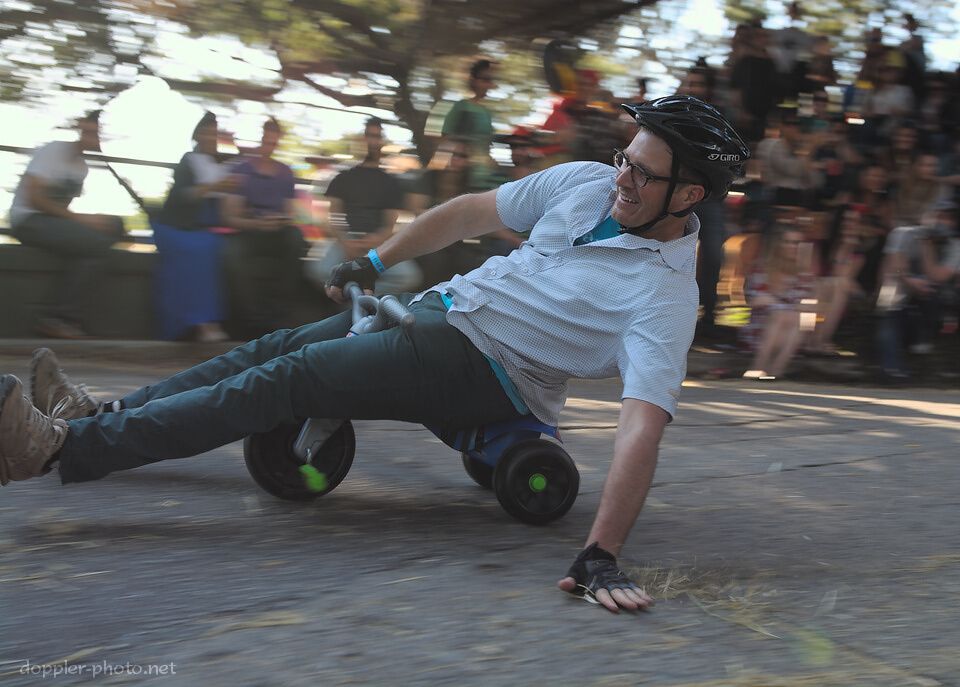 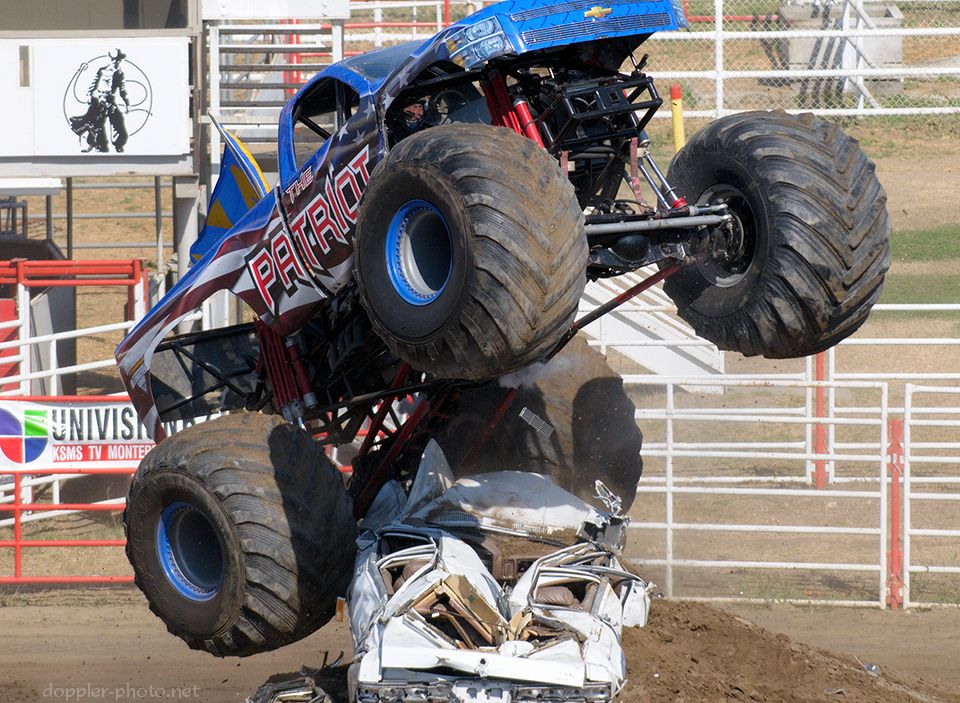 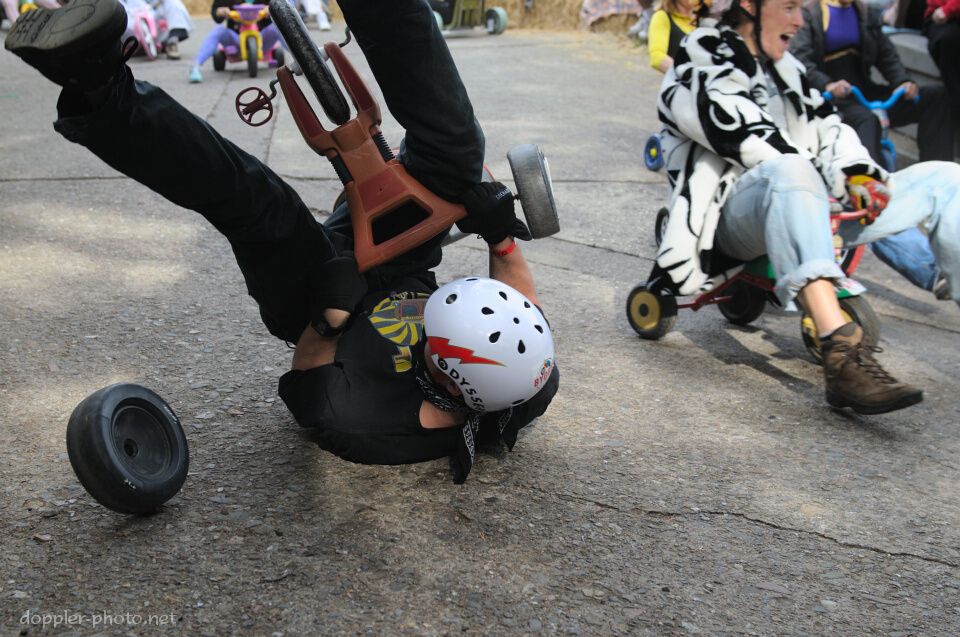