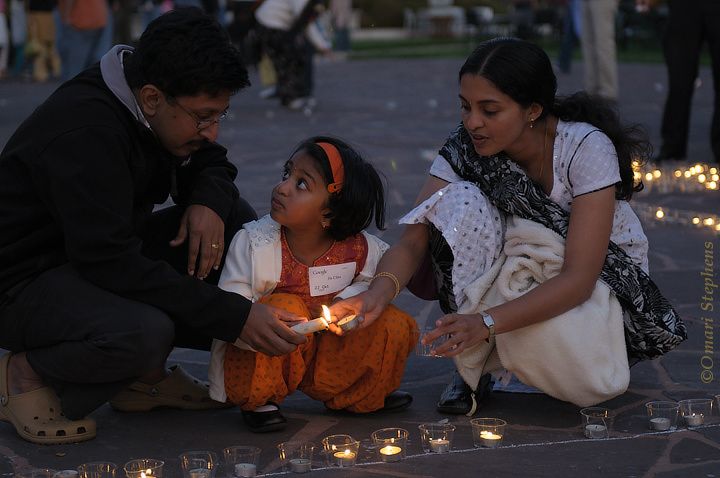 From the outset, it was clear that Google's Diwali celebration would be a festival of lights, music, dance, and tradition.  The announcement touted thousands of candles on and around Charlie's patio, and while I didn't even attempt to count, there were certainly plenty to go around.  Music was playing from early on, and dancing began as the daylight faded.

What became increasingly clear as the afternoon turned to evening though, was that this was also a celebration of family, friendship, and community.  The evening was mildly windy, and it took a constant effort from attendees to keep the candles aflame.

In the face of the large task to light all of the candles, and the ongoing task of relighting the ones that had been blown out, personalities and connections began to emerge.  For instance, in the above image, parents teach their daughter how to properly light a candle.  The care they took conveyed the importance of that knowledge, and of the Diwali celebration as a whole.

Sometimes it's hard to tell what you've accomplished from up close.  You might focus on the problems, the mistakes, the kicked-over cups and the blown-out candles without ever realizing that the result isn't perfect, but y'know, it's pretty good.

This was the approximate proportion of completeness that was maintained at least until I departed.  Even though one candle in every couple was blown out, the shapes were easily-discernible and pleasing to look at.

I found it interesting to watch the ad-hoc teamwork and camaraderie that seemed to spontaneously occur around the patio.  For one, at the beginning of the evening, nearly everyone working on the design was wearing some sort of traditional clothing.  As the evening progressed, though, the numbers started to even out as people, perhaps onlookers, friends, or family, joined in and figured out how they could help.

Above is pictured the start of one ad-hoc fire-distribution team that formed, passed the flame along, and just as quickly disbanded to work on different parts of the design.

What was interesting, though, was how the people involved seemed to protect the flame like a gift.  The way they passed the flame certainly wasn't the most efficient way to do it, but instead of pure efficiency, the passing seemed to evoke a measure of duty, of stewardship and friendship, that wouldn't have happened otherwise.

Here, the flame nearly died after an especially strong gust of wind extinguished the candles.  Thankfully, though, both candles autoreignited and the lighting went on.

And I say that "thankfully" with an amount of sincerity that I wasn't quite expecting.  Even as a passive observer, I felt like part of this team.  I wasn't helping, but they clearly cared, and I cared with them.

And finally, the gift was put to use.  As the night went on, most of these people invariably moved on to other things, and others arrived to take up the watch and keep the candles lit.

Thanks for looking.  You can find more photos here.