Sometimes gear matters.  My photographic journey started off with a point-and-shoot camera, about 16 years ago, and has since been powered predominantly by some combination of DSLRs and (more recently) mirrorless cameras.

As I developed as a photojournalist, and subsequently as a documentary photographer, I found myself optimizing for two competing usecases: I wanted a camera I could keep with me, because some of the best opportunities are unexpected and unpredicted.  But I also wanted to be able to cover large events (like concerts and athletic events), while wearing gloves, where my movement might be constrained, without needing to change lenses.

Over the years, my kit has bifurcated into a pair of solutions that handle those two kinds of situations separately.  For everyday moments and unexpected situations, I have a Fuji X-T1 mirrorless camera with a fairly compact 27mm f/2.8 prime lens that's with me most of the time.  The whole package is sufficiently convenient that I carry it even on days when I expect no pictures to happen.  In contrast, when I go somewhere for the purpose of shooting, I'll usually bring a pair of D7100 DSLR bodies with f/2.8 zooms attached.  I still have plenty of frustrations with both setups, but even so, I still find myself able to work pretty effectively.

Finally, to put this post (and this series) into some context, I picked up the X-T1 in 2014 and have run a bit over 28k frames through it since then.  The D7100 bodies are at ~92k for the pair.  Previously, I had put ~118k frames onto two D300 bodies, ~23k frames onto a Sony NEX-7 and NEX-6, ~11k frames onto a Fuji X100, and ~50k frames onto the Nikon D70 that started it all for me.  Suffice it to say that I have a significant amount of experience with all of these cameras, and all of the conclusions I draw are specifically against this backdrop.  I'm well aware that other cameras (whether mirrorless or DSLR) have different strengths and weaknesses.

This image illustrates a combination of strengths and weaknesses of the X-T1 for the work that I do.  First and foremost, I was expecting to drop a friend off and leave immediately, so the mere fact that I was able to spot an interesting story and start documenting it is a tribute to the simple ability to keep the camera with me.

The controls also make it really easy to configure the exposure settings for the environment.  This is a darker image, and you can see motion blur on the hand of the central person, as he moves it above some dry ice.  Both the overall exposure and the general shutter speed are settings that I selected to be able to capture an image like this, and I tend to find it more difficult to nail the exposure settings quite as quickly with my DSLRs (likely in part due to the EVF / OVF distinction).

That said, I have never been happy with the AF performance or camera responsiveness of any of the mirrorless cameras I've used.  In this case, I tried to focus on the hand or the face of the person in the center, and instead, the frame is focused on the green bag at his feet.  With the D300 (and to some reduced extent, the D7100), if you pick a point in light like this, it's going to be in focus.  Period.  With the D7100 I sometimes have to double-check.  With the X-T1 I always have to double-check.  Plus, the essentially unusable continuous autofocus means that I can't get one shot in the bag while waiting for the camera to improve its AF lock.  Every time I AF, I have to wait for it to be done before I can capture another frame.

I don't really like the focal length of the lens on this camera.  But the need for a package that's as small as possible means that I don't have much alternative.  All of the cameras I mentioned above have the same sensor size.  I shot at 16mm (24mm-equiv) on the Sony mirrorless cameras and that was too wide.  This 27mm (41mm-equiv) is too long.  The 23mm (35mm-equiv) on the X100 was perfect and also super compact, but I vastly prefer the XT-series body design and controls layout to the X100 series.  The available X-mount lenses include an 18mm, which is physically a bit longer than the current lens, and a 23mm, which is way larger.  *sigh*

My biggest gripe with this focal length is that I can't sit across a table from someone and take a portrait of their full torso.  But I also find myself in a surprising number of situations like the image above, where a little bit more field-of-view would go a long way.  In particular, I would have liked to have been able to move to my right (in order to shift the silver thing out of the lower-left corner of the frame) while keeping the person's face in the frame at the top-left, and the destination cooler in the frame at the bottom left.

The ability to capture this perspective demonstrates another strength, but the skewed alignment demonstrates a weakness.  I was holding the camera above my head, close to the ceiling, and pointing it downward.  I used the articulating LCD screen to frame and capture the shot, which is what enabled me to effectively shoot from this perspective.  The D7100 has no articulated screen, so I'd have been shooting blind with that camera (or, more likely, picking a different perspective entirely.

Moreover, because the camera has no mirror, shooting with the LCD is the exact same experience as with the EVF, so I switch back and forth all the time.  The AF performance remains frustrating, but it's a level of frustration that I'm used to, and that I've learned to work around.  By contrast, the D7100 (like all DSLRs) has to flip the mirror up to do LCD live view, and so while using live view, you either switch to contrast-detect AF (which is generally slower than the phase-detect AF that it would normally use), or you have to wait for it to drop the mirror, get an AF lock using the phase-detect AF module, and then flip the mirror up again to be able to see things again.

And the alignment is just another side-effect of the field of view — the more effort I have to put into keeping things in frame in the first place, the harder it is to keep things straight as well.

With all that said, there's a reason I still have this camera, nearly five years later.  It's a relatively low-resolution sensor (at 16MP), which means that it tends to do pretty well in lower-light scenarios.  I love this moment, and as a strong believer in the power of a good environmental portrait, I love that the background is present.  The surroundings have enough detail for them to feel like they're an actual place, rather than just some arbitrary portrait backdrop.  Also, the aperture is large enough to generate some background separation, which makes it easy to visually fix on the subject, even as your eyes are free to wander around the room.

The dynamic range at low ISO is another favorite feature.  I love how the shadows fade to a kind of darkness that feels stark at first, but that actually holds a fair amount of detail when you take a closer look.  In this shot, I love the gentle blue of the very-translucent water jugs.  To be clear, I process all of these images from RAWs, and I tend to ease up on the intense color saturation and contrast that the camera JPEGs contain by default.

That said, I think my ideal composition for this specific image would be to make a double-frame with the far and near door frames.  Instead of standing 1-2 feet away from the vehicle, I would stand about 10 feet away, crouch a bit, and zoom in to keep the subject this size or a tiny bit smaller in the frame.  From spot, I should be able to catch just as much detail of the actual subject's face, while also capturing more of the door frame.  Sadly, not really an option without a zoom lens.

One of the benefits of the X-T1 in particular (versus both DSLRs and other mirrorless cameras) is its combination of small size, light weight, and relatively sculpted body shape.  I was perched on the rear bumper, off-balance, and holding on somewhat precariously in a very awkward position.  The X-T1 was small and light enough that I could point it and shoot even while spending a lot of my attention on maintaining balance.

The DSLRs make this more difficult (especially when there are two of them, because you also have to worry about the second one bumping into things and scratching them).  Also, the smaller mirrorless cameras (like the X100) make this difficult because their bodies are more compact, but the narrow body grips make them a lot more difficult to hold onto while shooting with one hand.

So in practice, I just waited till the right moment and hit the button.  I kept the exposure on the dark side because I really liked the combination of strong shadows and contrasting glasses reflections.

I had mentioned responsiveness.  For all of the DSLRs I've owned, the camera is ready to shoot in well under the time it takes to move my finger from the power switch to the shutter release.  Likewise, all of the DSLRs I've owned have been configurable to "release priority" mode.  This means that when I press the shutter release, I want a picture.  No excuses.  No what-ifs.  No "but I'm in the middle of focusing."  No hesitation.  The D70, D300, and D7100 have performed impeccably on this front.  So long as the image buffer wasn't full, regardless of anything else, when I hit the shutter release I get a photo at that instant.

For whatever reason, this has been an extraordinary challenge for all of the mirrorless cameras I've owned, X-T1 included.  When I turn the camera on, there's noticeable lag before I can take a picture.  And so if a moment is already passing by the time I notice it, I'm a lot more likely to just miss it completely.  Likewise, even though the first-shot latency is relatively low these days, the shot-to-shot latency is still incredibly high.  Because I only ever do single-release mode (single shutter press == single image), I've gotten to the point where I can cycle my shutter finger three or four times in a second.  None of the DSLRs have had any problem with that, but all of the mirrorless cameras have a significant delay from one image to the next.  Which means that if I take a picture and realize that the moment I wanted was a moment later, I'm again a lot more likely to miss it.

So all in all, the X-T1 is a bit of a mixed bag for a bunch of the things I care about.  But it was the best possible mixed bag at the time when I bought it, and it's still a pretty good compromise.  I definitely have my eyes on an X-T2 (though probably not an X-T3, because I don't care about video, and I'd rather keep saving up for a pair of D500 bodies).  I generally have no interest in full-frame cameras, because they add weight, size, and cost for no practical benefit for what and how I shoot.

Tune in next time for the comparative experience of shooting with a pair of DSLRs.  Subscribe now to be notified when I finally drop-kick that one out the door. 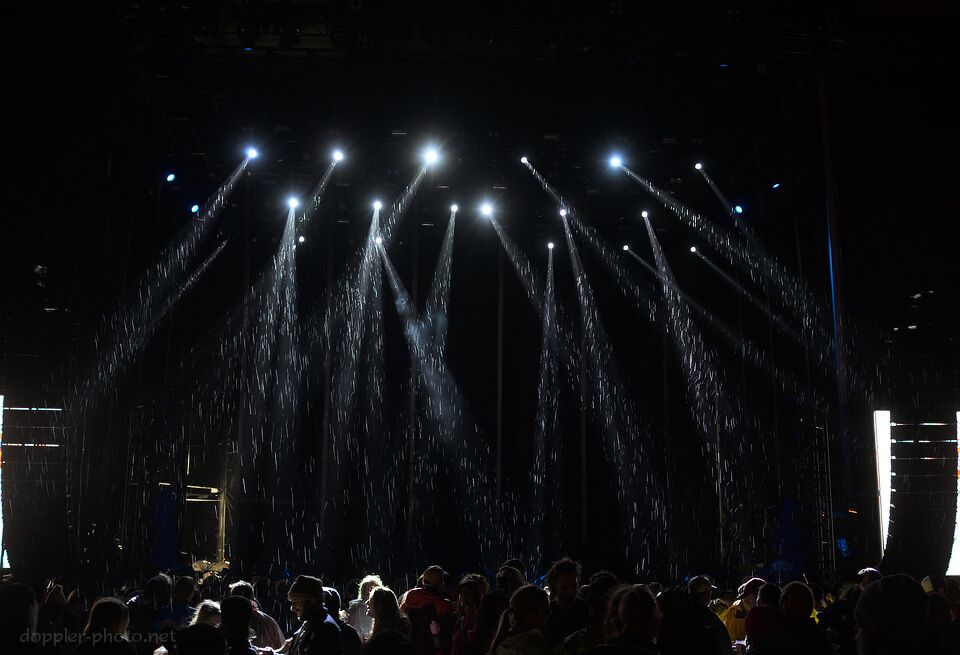