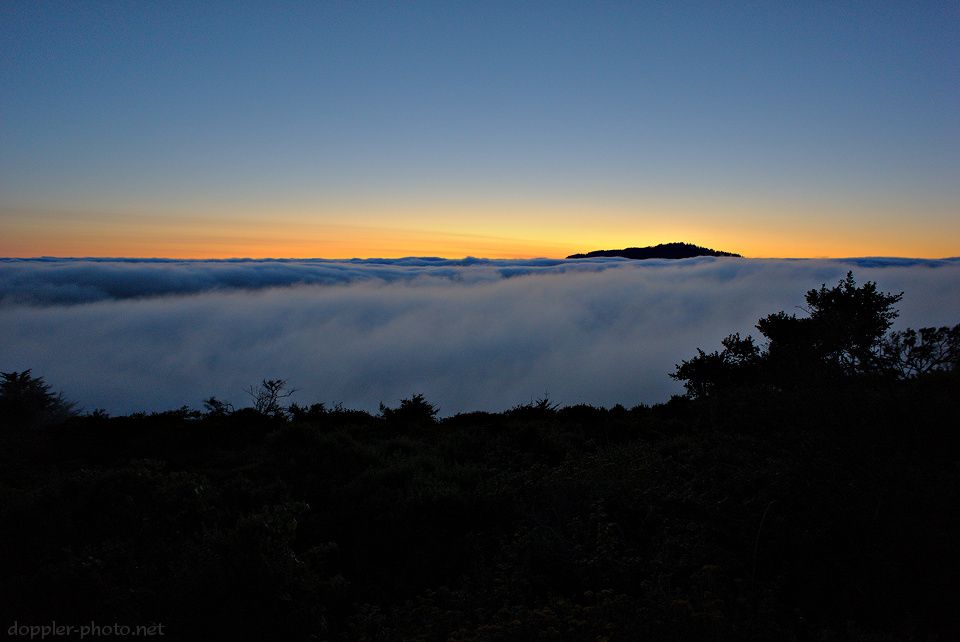 I don't think of myself as a landscape photographer, but every once in awhile I'll see a stunning vista, and I somehow manage to capture not just the view, but the feeling of having been there.  This is one of those images.

After departing Half Moon Bay, I was driving up through dense fog on CA92, when suddenly the fog cleared.  At the ridgeline, I turned south along Skyline Boulevard and was immediately stunned by the scene to the west.  It was just dim fog from below, but what I saw from above was an undulating mass of clouds, stretching as far as the eye could see.

But even more, as I stood there watching, the fog was slowly rising toward me, sloshing around like the water in an occupied bathtub.  It was such a unique, unforgettable feeling, to simultaneously experience the tranquility of a beautiful sunset alongside the the excitement of a gigantic wave of moisture rising to wash over you and engulf you completely.  It's like nothing I've ever experienced before.

Yet somehow, I managed to capture that mix of emotions.  Perched precariously atop a guard-rail, I was able to peek over the looming, advancing clouds in the foreground to also capture a glimpse of the still-turbulent mass in the midground, all beneath a beautiful, tranquil sunset in the distance.  A shadowy hint of the California shrubs and wildflowers that populate the mountain keep the image firmly anchored in reality.

If it seems like I'm excited about this image, that's because I am :o)  If you're also excited about this image — perhaps you've tried to explain to someone just what fog can look like rolling over a mountaintop, or maybe you just want that feeling in your own home — I urge you to consider a print.  An image like this is best enjoyed when it's larger than your head.  After all, part of why nature is so awesome is that it's Just… So… Huge…  A fantastic print can recreate that feeling in ways that go far beyond seeing a small image on a computer.  Contact me at prints@doppler-photo.net

As for me, I know exactly where my own copies of "Overwhelmed" and "Fluid Dynamics" are going :o)