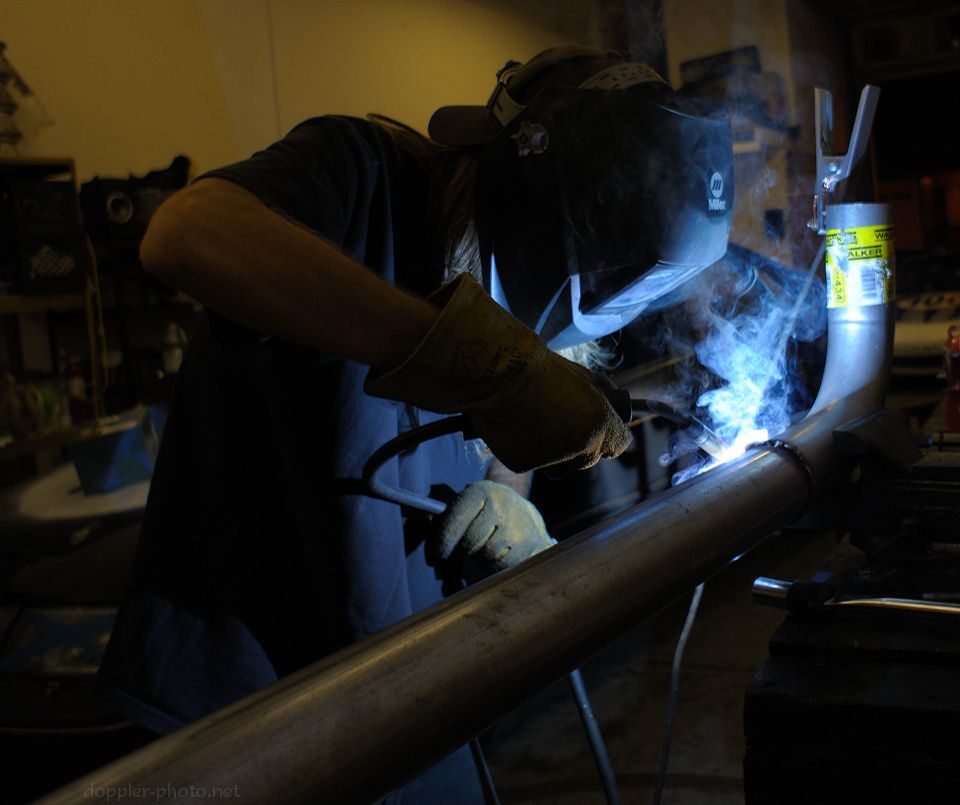 In a previous episode, I noted that Saab Story is rife with exhaust leaks.  Jerrit took it upon himself to build us a new, less leaky exhaust.  However, even the best-laid pipes of Jerrit and team do often go awry.

To start the process, Jerrit obtained some pipes.  He wanted to flare the pipes to friction-fit them together before welding, so he bought a pipe-flaring tool…

So, there's an old saying about tools: "buy it cheap, buy it twice."  It's not always clear how cheap is too cheap, though.

Well, let me tell you: this tool was way too cheap.  Shortly after taking this photo, Jerrit discovered that the tool had stopped advancing.  It turned out that some threads on the tool had destroyed themselves before the tool had done much of anything.

When you buy tools on a budget, it's useful to know how to fix them when they break.  After the initial failure, I went to OSH and came back with a matching, higher-grade nut for the original drive shaft, as well as a new all-thread shaft in case the original didn't work.

Jerrit turned the shaft with the new nut, and eventually the threads on the new nut were destroyed as well.  After disassembling the tool again, I also discovered that the steel conical compression part was starting to tear into pieces.  It was at this point that Jerrit aptly suggested, "Let's just keep at it until it eats shit and explodes."  Well put.

I swapped the original shaft for the all-thread, and put nuts, bolts, and lots of grease in the appropriate places.  All of the new stuff held up this time, and we actually managed to flare the pipe barely enough for another pipe to fit in.  At that point, we discovered that the other conical compression part had gotten crushed in the process.  After two rebuilds, we gave up and ordered a different tool.

After spending all night flaring a single pipe joint, we finally pulled out the welder to try to finish things up.  In keeping with our rate of progress the rest of the night, it took some inspection, a phone call, and resetting a tripped breaker to actually get some welding done.  And even so, the incomplete flaring job made it difficult for Jerrit to make a decent weld, because there was a giant air gap between the pieces.  Oh well…

The best-laid schemes o' mice an' men
Gang aft agley,
An' lea'e us nought but grief an' pain,
For promis'd joy!