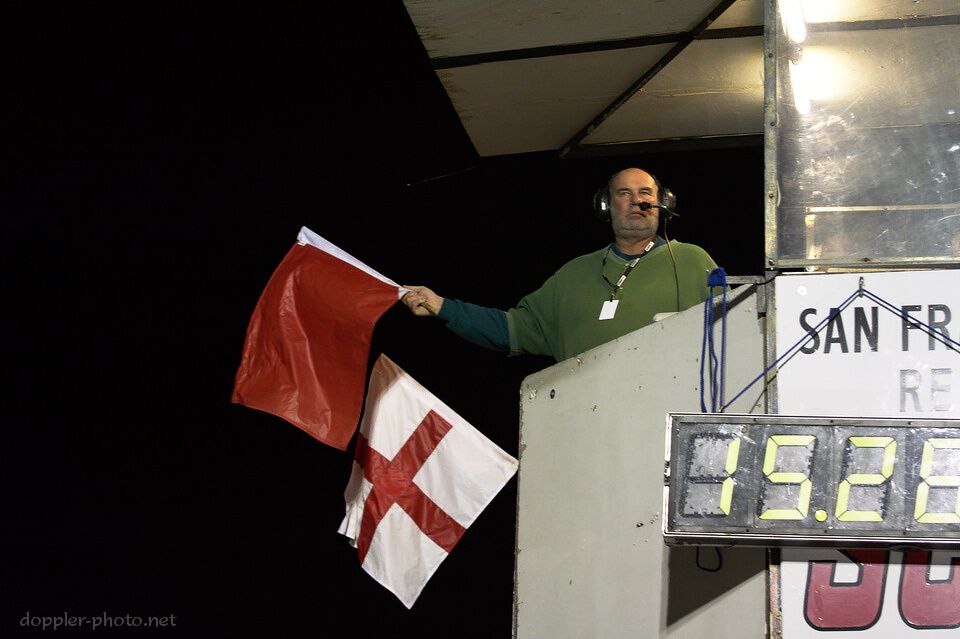 (Note: this post follows "Break.  Fix.  Repeat." in the Rhythm of Racing series.)

This is the flag that you never want to see at a race track.  The other colors are, by and large, to be expected.  Green flag when the race is underway.  Yellow for localized incidents or disabled vehicles (spins, stalls, lost wheels, etc.).  Striped red/yellow for debris on the racetrack (parts, dirt, oil, etc.).  Blue with yellow cross when faster traffic is approaching.

There are more, but the flags are all about keeping the race going.  About letting drivers know about forthcoming track situations and conditions so that the cars can continue circulating.  Letting individual drivers know that they need to come in for a penalty.  And so on.

The red flag means "stop on track immediately."  Something happened which is more important than the continuation of the race.

Near as I could tell, there was nothing special about the Sector Purple Racing #71 car.  The morning of the race, the team went through their morning routine just like any other team.

Once on track, the car was running fairly well.  According to the final scoring sheet, the RJ Racing #23 Miata, which finished first among the Miatas in the race, turned 587 laps in 24.5 hours, for ~23.9 laps per hour.  For the 9 hours that it was on track, the #71 averaged ~23.3 laps per hour; slower, but pretty much on-pace.

Somewhere after the 9-hour mark, when the sun had already set, the #71 ran out of fuel, and subsequently lost its lights.  It came to a stop on-track, toward the right side of the track, in the middle of the back stretch between turns 13 and 14.

I talked to a member of the Sector Purple Racing team, who recounted what he heard over the radio.  "Where are the flashers?  Never mind, I found them."  About thirty seconds later, the team-member estimated, the #55 Mazda 6 Diesel would hit the #71 at full race speed.

After I saw the red flag, nobody around me seemed to know what had happened.  I followed the emergency lights, and this is what the scene looked like when I arrived.  By this point, the driver of the #71 was already out of the car and in some other emergency vehicle.

Immediately after I took this photo, one of the emergency personnel asked me (and some other photographers) to stop taking pictures of the scene.  I watched for awhile, and then moved to take pictures of a different part of the cleanup.

This appears to be where the #55 car came to a rest, about 200-300 feet down the track from where the #71 had stopped against a barrier.  The #55 itself had been moved before I showed up.

Prior to the collision, the #55 was closing on a slower car while coming down toward the back straight, where the #71 was stopped.  The driver attempted to pass the slow vehicle on the right and then struck the #71.  A member of the Mazda Dealers race team would later share that, "We all watched the video.  He moves along, then he goes right and suddenly there's this white thing.  Everybody flinched.  Even though you know what's coming, you still flinch."

While continuing to talk to people about the collision, I heard the unmistakeable sound of an approaching helicopter.  Police had blocked off the entrance to the racetrack and turned the area into an ad-hoc landing zone.

I was initially surprised about the helicopter evacuation, since I had initially heard that the driver was conscious and able to walk after the incident.  I heard later that the driver was in and out of consciousness while in EMT care, and that he had complained of neck pain, which would explain the increased urgency of the situation.

A paramedic leans on the now-empty gurney after the driver was loaded into the medevac helicopter.

The helicopter hovers above the Thunderhill entrance for a moment before setting a course for Enloe Medical Center, in Chico, CA.  A post on the Sector Purple Racing Facebook page noted that the driver had suffered a collapsed lung and a concussion, and was scheduled to spend 1-2 days in the hospital for observation.

I found this story particularly interesting to consider, because it simultaneously demonstrates how dangerous motorsports can be, but also how safe motorsports has become.  I've been unable to get a status update on the #71 driver, but judging by the Facebook post, he wasn't doing too badly.  And I asked a person on the #55 team how their driver was doing, and got the response that "oh, he's fine.  He'll definitely feel it in the morning, but he's fine."

But that's how it goes.  Risk is an inherent part of motorsports.  You do what you can to lower the risk to a manageable level, and then you manage it.  Sometimes disaster strikes, but with luck, everyone makes it out and the entire community learns what it can from the situation in order to continue managing that risk.

And then you get back out there and race some more. The full Rhythm of Racing sequence: