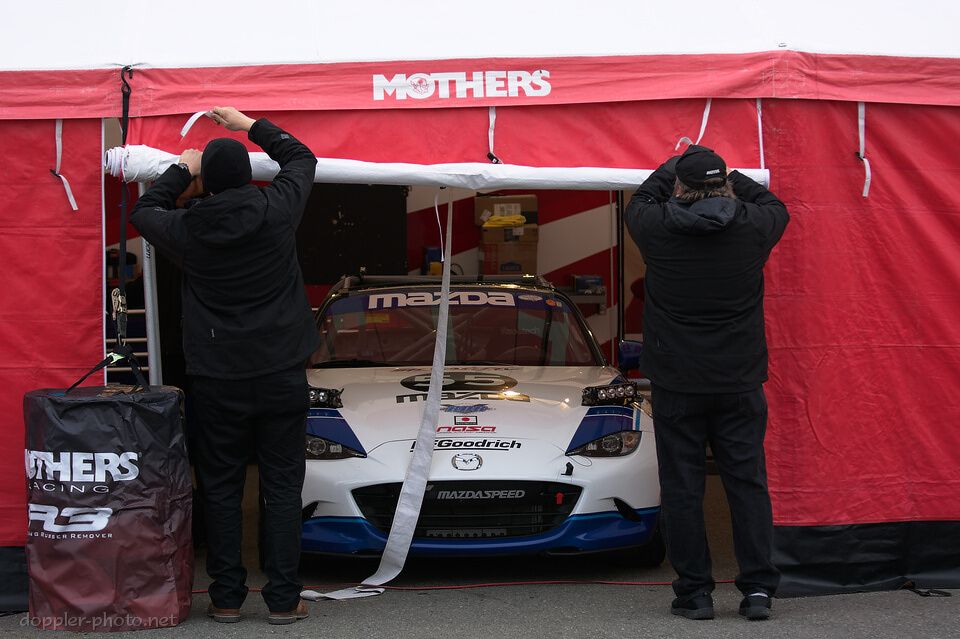 Every year that I cover the 25 Hours of Thunderhill, I strive to find a different angle.  A new perspective that shows me something novel about a race that is becoming increasingly familiar.  Moreover, as a photojournalist at heart, I often come back from the race frustrated that I didn't spend more time talking to the people I photographed.  Frustrated that I can always tell a story about what's happening, but often not about how those stories affect the people experiencing them.

So I bought a voice recorder.

At this year's race, I took a leap of faith.  And while a bunch of things didn't go to plan, I took some baby steps in a direction that is already incredibly promising.

Who? What kinds of people find themselves at car races?  Certainly drivers, crew, fans, and friends.  But who else?  Track and safety crew.  Support staff.  Others?  The people who perform in the opening ceremonies are… well… people.  Maybe a sanitary worker rolls through the paddock, clearing out porta-potties.  Or a standby helicopter pilot hangs out, biding time.

All of those people have stories, and those stories all help to convey the various ways that the 25 Hours of Thunderhill influences and is influenced by the surrounding community.  The goal of this project was to collect and share some of those stories.

What? Fundamentally, for me, stories are about emotion.  They're about identifying with some aspects of another person's life, and experiencing some feeling as a result.  So I decided to cut straight to the chase.  For each interview, I asked a single question:
"Tell me about a time in motorsports when you felt furious."  Or "nervous."  Or "Embarassed."  Or some other emotion.

I wanted to give each person some control over the interview, without making it easy for a person to jump straight to the easy (but shallow) emotions.  I wanted people to describe their experiences of emotions that would be deep and personal, but also consequently interesting and unique.

So I wrote out a numbered list of 20 emotions, and had each person roll a 20-sided die to pick a topic.  If they got one that wasn't relevant, or that they didn't want to answer, they could re-roll once, and then I'd just move on.

When? I was planning to carry out interviews throughout the race, alongside all of my standard coverage.  Unfortunately, that's not really how things worked out.  I did my first interview Sunday morning, around 10:30 AM (with only 1.5 hours left in the race).

Fundamentally, the challenge for me was that I didn't want to interview a person in a large group (which might make them feel self-conscious, or to otherwise react to the group).  But I also didn't feel comfortable trying to pull a person away from a group for an interview.

I have some ideas on how to navigate this the next time around, but those ideas didn't emerge until I had done some post-race reflection.  Baby steps…

Where? In the 32-hour period that I spend walking around Thunderhill, I find myself in a bunch of different places, and around a bunch of different people.  I'm generally pretty comfortable talking to most of them, and so the plan was to run short interviews of interesting folks as I bumped into them throughout the time that I was there.  As mentioned above, this didn't quite happen, but it's still the plan for next time.

Why? When you tell someone you love about why you enjoy something, it's always about the emotions, right?

What you tell them isn't "I enjoy turning a wrench" so much as it's "I love feeling this sense of accomplishment and relief when I finish putting this thing together, and there aren't any parts left over, and it actually works!  It's like: I did that!  I made that!"

You don't say "driving is fun," but rather, "I love when I get angry, and then I manage to ride that balance of rage and self-control to push even harder than normal, but still avoid making mistakes."

Or maybe, "I remember back when my dad used to take me to watch the races.  At some point, I started taking him.  Near the end, he'd be pretty foggy most of the time, but whenever I took him back to the race track, he would always come back to reality, if only for those few hours.  I miss him so much…"

Those stories are all hypothetical, but they're based on snippets of actual stories that I've heard here and there.  I'm sure that people around the 25 Hours of Thunderhill have stories that are equally deep and meaningful.  I want to find those stories and share them, because I feel like that's an aspect of motorsports that touches so many of us.

What's next? Even though things didn't go to plan, I did actually run 5 interviews, each of which produced some awesome perspectives.  So the next five Thunderhill posts will each center on one of those stories, and will convey how the theme of each story shows up repeatedly throughout the race.

The full Stories from the 25 series: