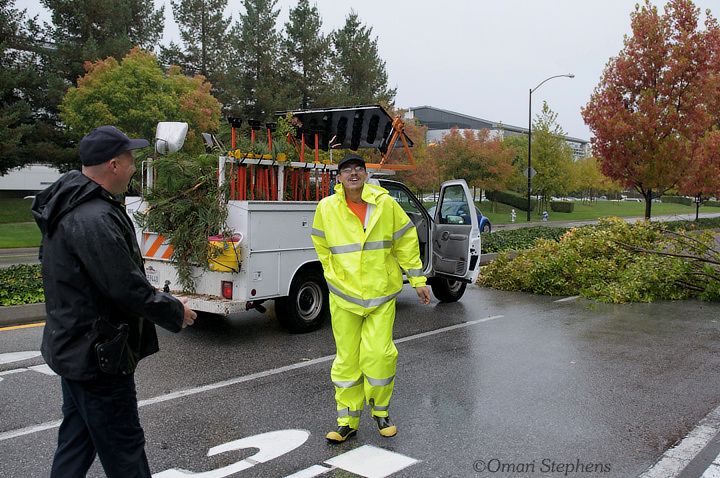 On Tuesday, the rain came.

Most places that I've lived, rain is rain.  You get a little wet, whatever.  But this being California, the rain is mixed with tiny hatchets that fall from the sky.  The end result is that trees and tree branches go down just about everywhere.

When I noticed the rain Tuesday morning, I made a mental note to find some photo to commemorate the "first" rain.  At lunch, a coworker of mine mentioned a downed tree and, figuring I could at least get a shot of the tree from an interesting angle, I went to shoot it.

When I got there, two police officers were standing next to their car, which was blocking one side of the roadway.  I took a few photos, then walked over to chat, and after a couple minutes, one of the two remarked "I think these are our guys."  Sweet.  A work truck rolled to a stop, and the guy above popped out with a sort of nervous yet tireless energy.  Let's call him "E."

His partner, whom we'll call "C," was a seemingly-quiet guy who handled the small chainsaw.  Whereas E jumped out of the truck, nearly shouted a "hello" to the cops and myself, and immediately started off on a good-natured complaint about how Liquid Ambers can't deal with rain, C seemed nearly stoic.

He methodically pulled the chainsaw from one of the truck's many side-compartments, oiled it, fired it up, and started cutting.  He would cut off the outer, leaf-bearing branches around 5 feet at a time, and toss the cut branches behind him, where E would grab them and pile them on the side of the road, out of the driving lanes.

In the 15 minutes that the two were there, I only remembered hearing C speak once.  At one point, the chainsaw was pinched by a large branch before the blade made it all the way through.  C asked for a hand, and then calmly and quietly worked the saw  back out with E's assistance.

After the cutting was done and the downed branch was finally out of the roadway, E grabbed a narrow, stiff rake and started pulling the bulk of the leaves and fruit pods to the side of the road.  As was the case the entire time, his movements were deliberate and sure-footed, but still with a bit of nervous edginess to them.  As he was finishing up, he quipped with a smile, "I tell ya, rain and sweat don't mix."

And with a quick salutation from E, the pair were gone, off to deal with the next spot on their list, seemingly unconcerned with the still-driving rain.

What struck me about the two was their teamwork and efficiency; each knew their roles, their tools, their truck.  And watching the two work together was like watching the calloused hands of a carpenter guide a piece through the band saw: deliberate, confident, like clockwork.  It was as if C and E started with manual labor, and raised it to the level of craftsmanship.

As they demonstrated, "Life isn't about waiting for the storm to pass, it's about learning how to dance in the rain."