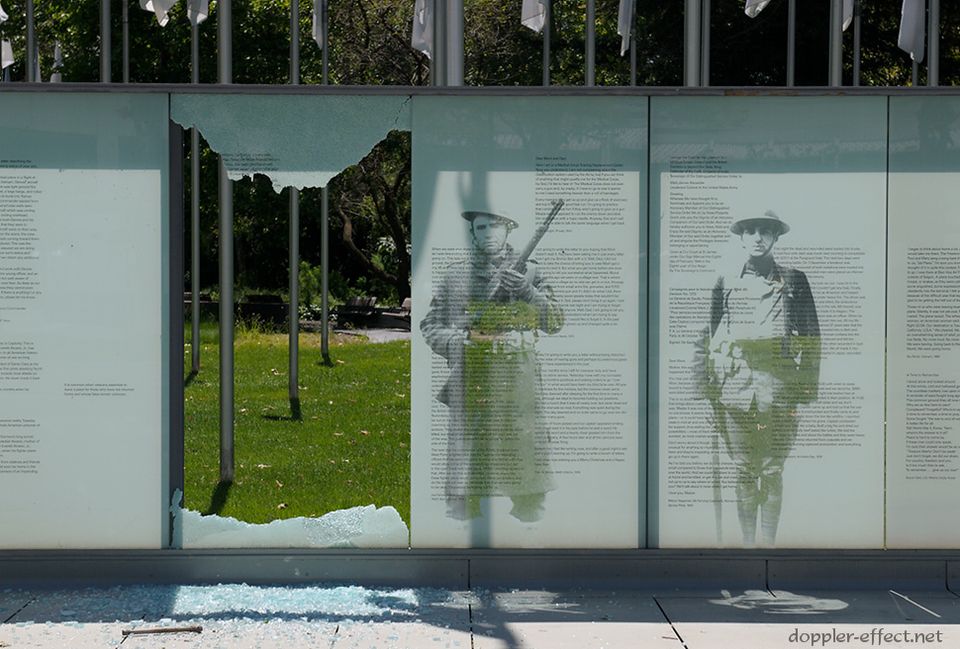 In what was likely an act of vandalism, a glass wall in the San Jose Veteran's Memorial appears with a shattered pane of glass, as photographed last Tuesday, May 11th shortly after noon.  A short metal pipe lies on the ground amidst the broken glass.

The Memorial is sited in the Guadalupe River Park, which is overseen by the Guadalupe River Park Conservancy (GRPC).  In a phone discussion, GRPC Executive Director Leslee Hamilton estimated the repair costs for the damage at around $15,000.  She also said the fund that might otherwise be used to help repair the damage is running low.  GRPC accepts tax-deductible donations; different ways to donate are listed on the group's website at http://www.grpg.org/SupportDonate.shtml

This would not be the first time the Memorial was vandalized.  In April 2005, the San Jose Police Officers' Association established the Victims' Assistance Program as a "community fund to assist victims of violent crimes or loss of property," according to the Program's website.  The inaugural donation, in the amount of $5,000, was made toward the repair of an estimated $20,000-worth of damage to the Memorial from an act of vandalism which was discovered in March of that same year.

The GRPC Public Art webpage describes the site as follows:

(Used with permission.) The now-defunct Manhattan Projects architectural firm designed the memorial, and the glass wall was constructed by John Lewis Glass, an Oakland-based glass studio founded in 1969 by UC Berkeley alum John Lewis.  The Memorial was dedicated on November 11, Veterans Day, of 1997.