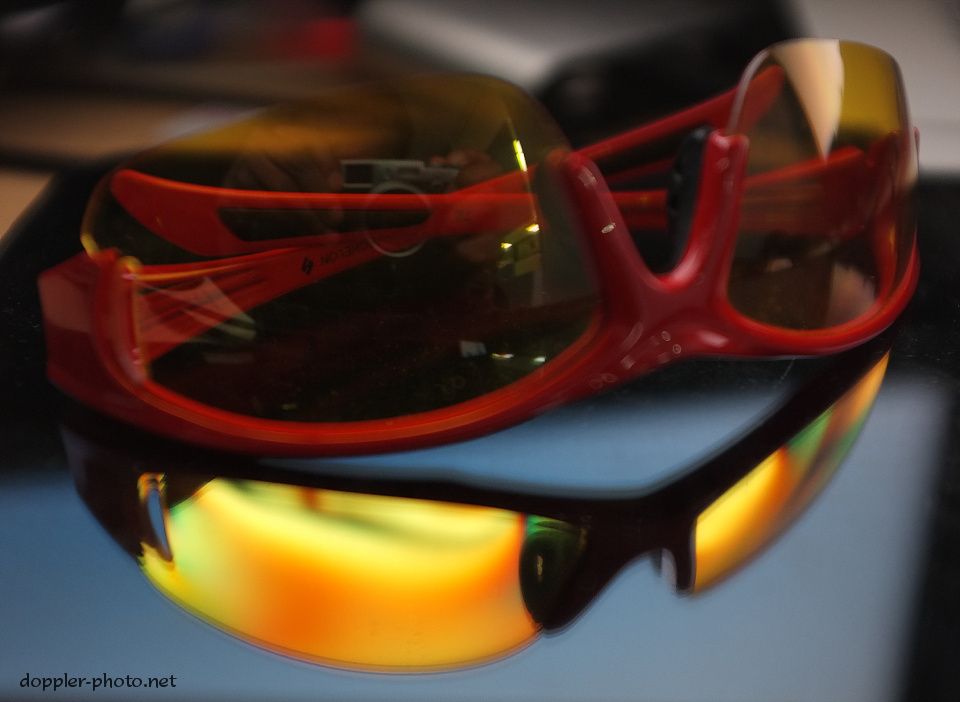 Why does the reflection look so much like a tone-mapped image?  I suspect there are three main factors: 1) many tone-mapped images have little to no micro-contrast, and are soft to the point of seeming surreal; 2) they tend to be highly saturated; and 3) they tend to transition smoothly between highly-saturated colors of different hues

I basically discovered this physical effect by accident, though I imagine it's simply a combination of brightly-colored lenses and some well-documented optical phenomena.  Note that what follows is a theory, which could easily be wrong and/or misguided.

So for one, when you stick certain plastics between partially- or fully-crossed linear polarizers, you end up being able to see stress patterns in the plastic.  This is called stress-induced birefringence.  It's important to mention that both the light source (a large LCD monitor) as well as the mirror itself (an LCD screen in a tablet) contain linear polarizers.

Beyond that, I also noticed that the colors changed as I moved my head/camera.  So the stress dependence was only part of the story.  The rest of it is probably related to the specific path the light would need to take to pass from the light source, through the glasses, off of the mirror, and into my eyes.

In particular, shorter wavelengths tend to scatter at steeper angles than longer wavelengths — this is why a clear sky appears blue, and a sunset appears reddish.  Consistent with this theory, when I approached a steeper angle to the glasses, the reflection of the lenses became darker — the glasses weren't scattering much light at very steep angles because the lenses worked to filter short wavelengths (hence their yellow appearance).

So as the required scattering angle varies continuously across the surface of each lens, the apparent hue of the light changes among various hues that are close to yellow (namely, red and tiny bit of green).  Score one for muggle science!