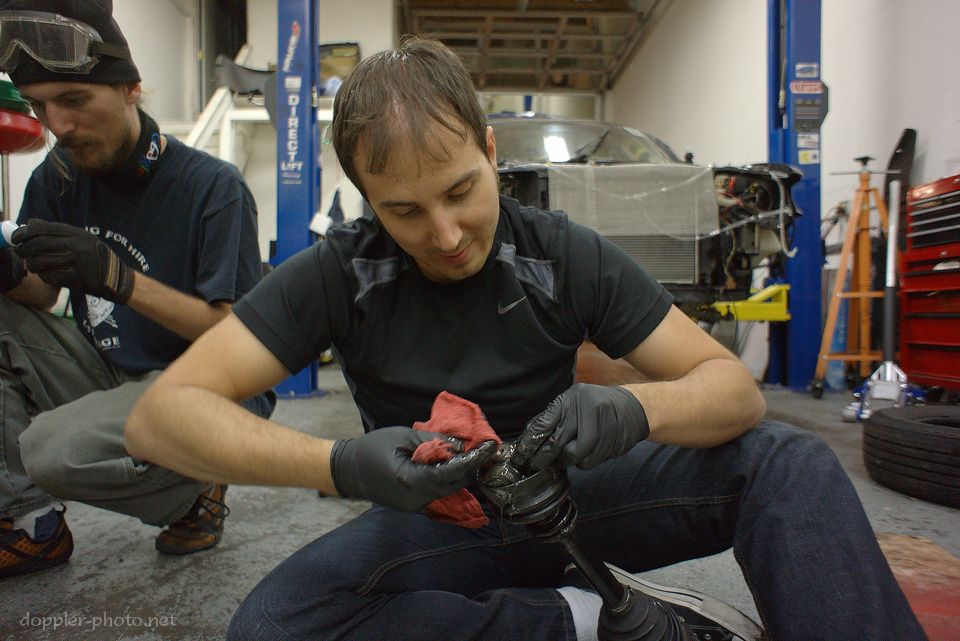 Bad News, Everyone!
I now know exactly how the CV joint in a car axle works!

Good News, Everyone!
When what used to be a CV joint turns into an "exploded" view of a bunch of 1mm-diameter needle bearings, it's time to stop and think about what you've done.

So how did we end up in this mess?  Funny you should ask.  A couple days before Sears Pointless, we discovered that one of our CV joints had a pin-prick in it that was weeping grease.  We patched it at the time, and that was good enough to get us through the two partial laps that our car finished before it stopped Saabing.  So last night, we finally had the half-shaft out, and we also had a CV boot replacement kit, so we decided to replace the torn boot and make everything nice and shiny.  Well… that was the plan…

CV joints are awesome.  It's like a splined shaft with three splines, except that the splines are actually pockets for three giant bearings on a three-armed carrier, all which you can see in the photo.  The carrier is held onto the end of the half-shaft with a snap-ring.  So we pulled the snap-ring off, and used a precariously-balanced bearing puller to yank the carrier off of the half-shaft.  All good so far.

Once the boot was replaced, it was time to get the carrier back onto the half-shaft.

Now, let's talk about things I know.  I know you don't hammer directly on a bearing surface.  So I found a piece of wood (which is soft enough that it won't damage metal bearing surfaces).

Now, let's talk about things I didn't know.  I didn't know that positioning the wood on the corner (rather than the flat) of one of the three bearings and hammering would cause the bearing to slide off of the carrier, causing an uncountable number of impossibly tiny needle bearings to fall every which way.  Oops.