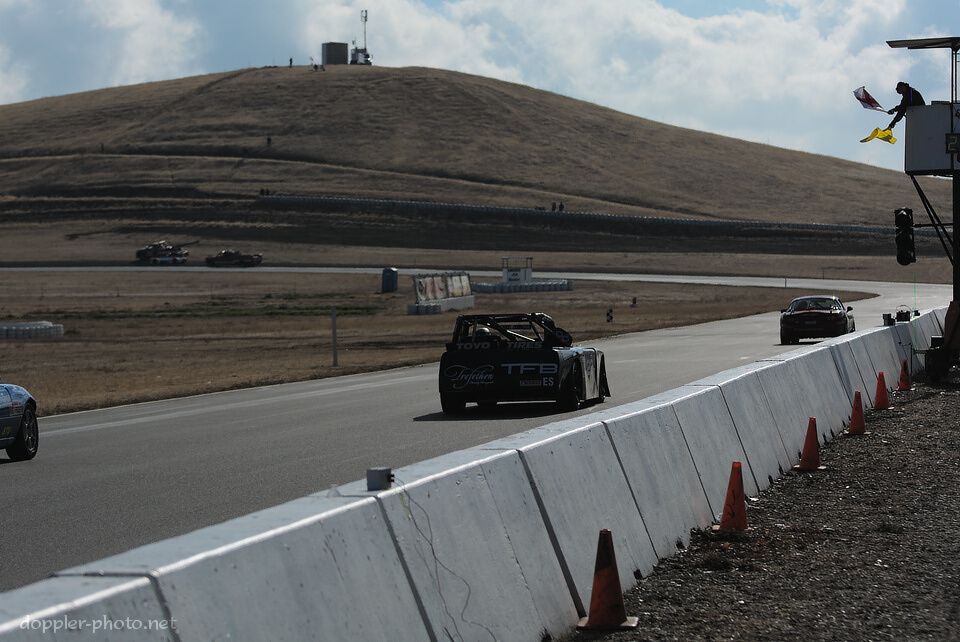 Safety is often a nameless, faceless concept at a racetrack.  Generally, by the time the safety crew comes a-callin', you're already having a bad day, and it's the problems that occupy your mind.

At the race this year, I had an opportunity to meet some members of the safety crew; to see their antics, to witness their personalities, and to experience their unexpected hospitality.  For a short period of time, I got to see that nameless, faceless group as a family of hard-working, caring individuals.  And after I left them, that impression stayed with me.

During every running of the 25 Hours of Thunderhill, the safety crew organizes some kind of dinner.  In years past, there were catering and BBQ.  This year, they roasted a whole pig on a spit.

As I was walking around the track, I spotted the rotisserie and went to take a few pictures.  Upon noticing me, one of the folks manning the rotisserie offered, "Hey, if you hang around for a bit, this is almost ready."

Spending time at the safety crew's dinner was a revelation, for me.  As a guest in other circumstances, I've often felt a subtle obligation to stick by my host.  As if anyone who hadn't heard the invitation might wonder why I was there.  They might not out and say it, but at times I definitely felt it: "Did someone invite you?  Because if not, you should probably leave."

Chilling with the safety crew, I felt 100% welcome, at home, and at ease.  When people came out of the trailer and saw me, there was no hesitating moment of confusion.  When it was time to eat, someone just stuffed a plate into my hands.  When I hung back to document the experience, another person admonished, "get some while it's hot."  And when I finally stopped shooting and started eating, yet another person asked if he could get me anything to drink from inside.

The middle of a racetrack was the most unexpected place to find hospitality, but I suppose the best kind of gift is one that's unbelievable until it happens.

As people hung around and ate, I also saw glimpses of their personalities emerge.  Some people made smart-aleck comments about my hat.  Other people jumped into my pictures.  All told, I was struck by how joyous everyone seemed.

The man in blue seemed like a patriarch of sorts.  He's the one who had offered me the initial invitation.  He's also the one who seemed to know the most about how to butcher a pig.  I watched as he taught another crew-member how to cut along the pig's spine, and at some point he took over the knife.

After leaving their company, I kept hiking toward Turn 1 to shoot the front half the track from the infield.  On my circuitous route back to the paddock (through the infield, along the T14 wall, past Mordor, then up the hill and over the T14 bridge), I passed by again, and they were busy giving the deeper bits of meat a little more time over the fire.

A reunion, of sorts
Sometime that night, I got a few hours of sleep, and then woke up in time to catch the morning twilight and sunrise.  The first thing I spotted, though, was a banged-up racecar being dropped off in the paddock.  I said hi to the crew, and one of them suggested that I should take a quick portrait of them.

In some ways, this photo is an odd juxtaposition, and in other ways, it's completely natural.  Over time, I've found that a lot of tradespeople have pride in the work that they do, and this group was no exception.

As the checkered flag flies, the safety crew gathers near the front straight with lights flashing to watch the finish.  I feel honored to have been able to spend the time with them that I did. Coming tomorrow: An unlikely race to the finish between the #62 Melhill Racing/TFB 330i and the #08 GMG Racing R8-LMS.