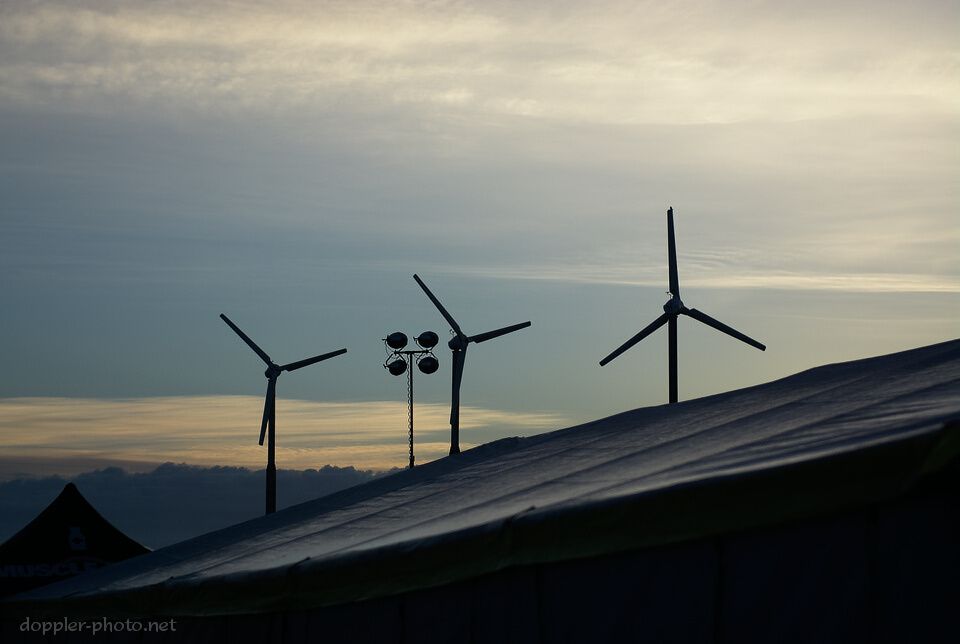 After driving overnight through a torrential (by California's standards) downpour, I arrived to a clear morning that was free of the particulate haze that sometimes develops in the farmland surrounding the track.  As twilight turned to dawn, Thunderhill's characteristic trio of windmills stood still before a lightening sky, and above a paddock that was still wet from the night's rains.

The air was cool and calm.  Not as frigid as the prior year, when I arrived to see Hoosiers covered in ice, but the wet still made things a bit uncomfortable.  At the cusp of dawn, many of the teams began pulling back the covers that they had lashed to keep the water out overnight.  It was the beginning of the last preparations before they would do battle against the clock, against each other, and against themselves.

The safety crew also had final preparations, and they huddled as the sun had just crested the horizon.  It would take a little while, yet, for the day to warm.  In the photo, Mike Easton (second from right) addresses the group, with coffee in hand, as his breath leaves a faint trail of condensation in the air.

As time counts down toward the start, teams snap into their morning routines and pick up steam.  In the photo, the JFC (Just Fast Cars) racing team adds a calculated initial load of fuel to their car.

Clarity of vision is a constant focus in motorsports — the easier it is to see well, the easier it becomes for the driver to stay relaxed, avoid fatigue, and avoid making mistakes.  Many teams run Lexan windshields and windows rather than glass because Lexan is lighter and won't shatter in the event of a crash.  Then they polish and protect those pieces incessantly.

Here, a crew member for Team Quick Racing Products wipes off overnight condensation as he cleans the right-hand window of the team's Superlight SLC racecar.  The team retired from the prior year's race with a broken steering mechanism, and hoped to better on that result during this race.

Likewise, the paramedics also need to see.  Here "B.C.", an emergency medical technician, wipes raindrops from the windshield of one of the Side Trax EMS vehicles as they prepare for the race.  You may also remember B.C. as the blue-clad patriarch in the "Safety in Numbers" post from last year's 25 Hours of Camaraderie series.

After all is clean and dry, the teams do final vinyl applications, typically including driver name touchups and sponsor decals.  In the photo, a member of the Honda factory race team adds a remembrance for Joe McCarthy, a fabricator who specialized in Honda engine work. The full Rhythm of Racing sequence: