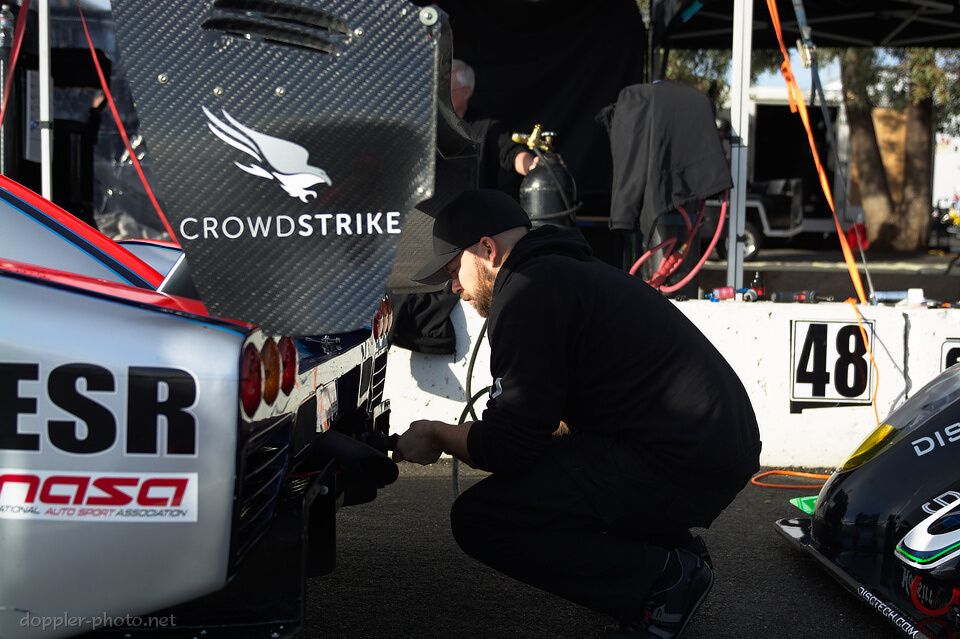 The rhythm of the 25 Hours of Thunderhill ebbs and flows throughout the year.  But race-day prep is generally split into two phases: the paddock phase, and the on-track phase.  The "Morning" post covered the first phase — the cars sleep in the paddock, and on race day morning, they wake up and warm up for the last time before they have to stretch those legs for real.

Afterwards, the teams roll the vehicles out into the hot pits, where the team members focus on pit stop strategy, camera mounts, race tire changes, or whatever else it may be.  In the photo, a member of the Crowd Strike / One Motorsports race team pressurizes the air jack system on their #48 Radical SR3 before swapping the car's wet-weather tires for dry-weather race slicks.

And after the hot pits, it's out onto the starting grid.  The 25 is one of a class of races where anyone can walk out on track before the start of the race; drivers, crew, and spectators alike.

Many of the teams push their cars out onto the grid.  For one, it's a way to conserve fuel — endurance races are all about going as far as possible with as few pit stops as possible, and the more fuel spent not moving at race pace, the fewer laps you can make between stops.  And as would be demonstrated later in the race, running out of fuel can be a recipe for actual disaster.

In addition to the fuel considerations, keeping the engine off is a way to keep some of the cars from overheating — many race cars get rid of the fans that keep street cars cool while at a stop, which means that those race cars build up heat unless they're in motion.

The grid walk is a time of rejoicing.  It's a going-away party, of sorts.  For crew-members who are friends and family, even though they may be physically present between pit stops, they're often mentally absent — keeping an ear on the radio to make sure everything's okay; keeping an eye on the track so they can head back to the pits if their car goes too long without an appearance.

This is the most present they'll be until the checkered flag flies, 25 hours after the start.  So people enjoy that presence while they can.

But even during the grid walk, final preparations continue.  Here, a team-member for the #67 Sparta Evo Brakes / Maxxis Tire / Bullet Performance team makes some last-minute adjustments to the car's race harness.

The US Air Force has been a long-time sponsor of the event, and the pre-race ceremony had featured flyovers since the race's first running in 2003, through the national reduction in flight demonstrations in 2012.  Even so, the ceremony continues to feature demonstrations by members of the USAF Color Guard, as well as songs performed by a bagpiper.  Here, a man salutes as the piper performs the national anthem.

After the national anthem, the race stewards start to clear the spectators from the track, the teams make sure everything is as set to race as it's gonna get, and the drivers suit up, sit down, and get ready to race.  I've seen a lot of drivers experience this same kind of moment before the race — calm, focused, starting to block out everything that isn't part of the race.

The safety crew has the unique privilege of standing at the center of the track, in double-file, as the cars move forward from the grid and begin their slow parade laps, leading up to the rolling start.  In the photo, members of the safety crew jog over to their vehicles after all the cars had cleared the grid.

And then, the green.  25 hours to go. The full Rhythm of Racing sequence: