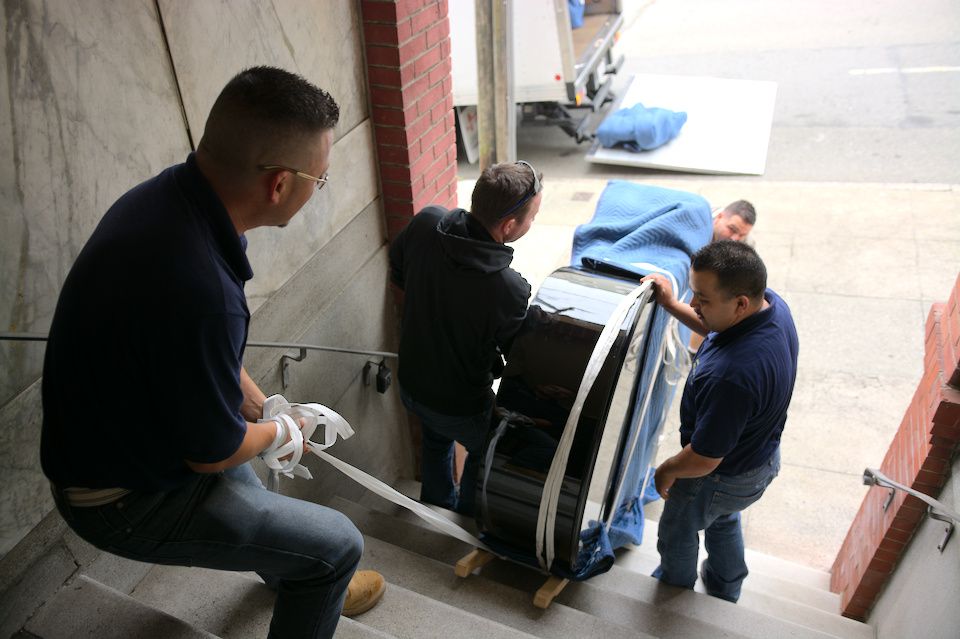 As I noted in "Timber!", tools and infrastructure make jobs like this significantly easier, and provide more margin for error.  For this move, the movers mounted the piano to a wooden sled (think of a dolly with no wheels), and used the sled as an interface with the world.  They let the sled ride down the stairs, and not having to keep the piano off the floor allowed them to focus their efforts on staying centered in the narrow interior staircase, and keeping the descent under control.

The frame also served as a solid anchoring point for the many straps they used to wrangle the piano into different orientations.  After making it down the steep decline to street level, they pivoted to face up the steep incline of the street itself.  Then they paused, with the piano balanced on a corner, as one of the quartet went to grab a large furniture dolly from the truck.

After some some careful navigation to find a gentle transition from the sidewalk to the pavement, they parked the piano in the moving truck, anchored it to the wall, and started cleaning up their tools.

So they called in a crane.  The new place had a small, open atrium that was just large enough to fly a piano into, plus a doorway that would get the piano to the interior of the building.

So they got cracking, starting with tying the wooden frame to some lifting straps.

Tune in next time for the rest of the move!  And don't forget that I love taking the opportunity to bring you stories that you might not see anywhere else.  Click here to subscribe, and don't forget to share with friends. The full pianissimo series: