I recently shot a handball match for the first time.  Despite spending 15–20 years of my life playing soccer, I haven't really spent much time photographing ball sports before.  And regardless, the rules and gameplay of handball are sufficiently different from soccer that I didn't know what to expect.  I had a lot to learn, and only the 1-hour duration of the match to find my balance and get some shots.  Here's how I approached that challenge.

First, put your camera down and watch

In order to do good work on a tight deadline, you have to have a strategy.  And when you have to learn how to do that good work first, patience becomes a huge virtue.  You have to give yourself the time to learn.  Dedicate some time to actually looking around and paying attention.  If there are more experienced people watching or in the audience, listen to what they react to.  Watch where they look.

Also, if at all possible, watch warmups.  When teams warm up, they practice patterns that you'll want to be able to recognize during the match.  Sometimes those patterns are basic — passing the ball to a teammate — and sometimes they're more elaborate.  But having a sense of what those patterns look like will help you to make sense of the organization and the flow of the game.

Okay, you've started to make the transition from "just watch" to "start taking some photos."  At that point, focus on wide angle shots.  Having a camera in front of your face restricts what you can see, and it's easy to lose context for the match if you try to zoom in and get tight crops on everything immediately.  It's easy to focus so much on details that you miss the rhythm of the game.  But it's that very rhythm that will give you a sense of where to look and when to shoot so that you're framed up on a shot before it happens.

Beyond that, starting wide helps you to figure out how to shoot groups of people.  It's pretty easy to isolate one player with a long lens, but a bunch of "hero shots" don't actually do the sport itself justice.  They don't help you tell the story of how those people got into those situations, and how or why the result of the game was what it was.  Different sports will have different characteristic arrangements of players, and those arrangements will help to tell the story of the game.

Communication is inherent in every team sport, and the styles of communication are often characteristic of each sport.  For sports with larger teams, the small conferences that happen will tend to be among people with similar or related roles.  So keep your eyes open, especially during timeouts and during half-time.

And take those photos when you see them, even if they might not make sense yet.  One of the benefits of learning on a deadline is that you might capture a moment earlier on that only starts to make sense once you pick up more context later in the match, or perhaps after you're back home doing some more research.  If you notice a moment that could be meaningful, it's better to capture it and not need it, than to wish you had taken that shot once you realize how meaningful it actually was.

There are some stories that can only be told from certain vantage points.  Especially in crowded situations, it can be tempting to work towards a specific spot with really good visibility and to spend the rest of the match feeling smug over that accomplishment.  And with every good shot you get from that perspective, it feels more and more like that's where you were meant to be.  It feels good, but it's a mistake.

Yes, it's good to get close to the field and get some shots from up close, but then try other things.  Can you get some elevation and shoot from above?  Can you shoot down a sideline?  If it's not distracting to the players, can you shoot from behind a goal, or from behind the players' benches?  Maybe take some shots that focus on (or that are framed by) members of the crowd?  Be creative.  Play with your compositions.  Take advantage of the unique features of each facility and take different kinds of shots throughout the match.

Sports are usually emotional for the people who participate.  The ways that those emotions manifest will vary by sport and by player, but the presence or absence of those manifestations can give you a sense of what's happening in a player's mind.

It takes focus to stay engaged in a game and to not lose oneself to untimely emotional outbursts.  So those expressions will tend to happen during short moments of relaxation, or as frustration and fatigue build up during the match.  If you keep your eyes open and stay in tune with the sentiment of the game, you'll have a better chance of catching those reactions when they do peek above the surface.  Listening to the crowd is also super helpful in this regard — they will tend to mirror the players' sentiments, but without so much self-restraint.

In addition to the overt expressions of emotion, players will also sometimes broadcast their sentiments in how they carry themselves.  Tired?  Relaxed?  Frustrated?  Energized?  You can show a lot of how the match felt for the players by capturing the moments in which their body language speaks for itself.

At the beginning of the match, there was a lot of focus on learning the game and on using expansive compositions to capture the big picture of what's going on out on the field.  As time passes, you should start to get a better sense of how the game is played generally, as well as how these two teams are playing against each other.

Sometimes, this manifests as consistent matchups between opposing players.  Those matchups can provide an interesting perspective on what's unique about this particular match.  It can start to convey what strengths and weaknesses are important for this sport, and how the individual players employ their strengths or defend their weaknesses in order to get an advantage on their opponent.

Stay alert after the match is over

You never know when an interesting moment will happen.  Good luck out there 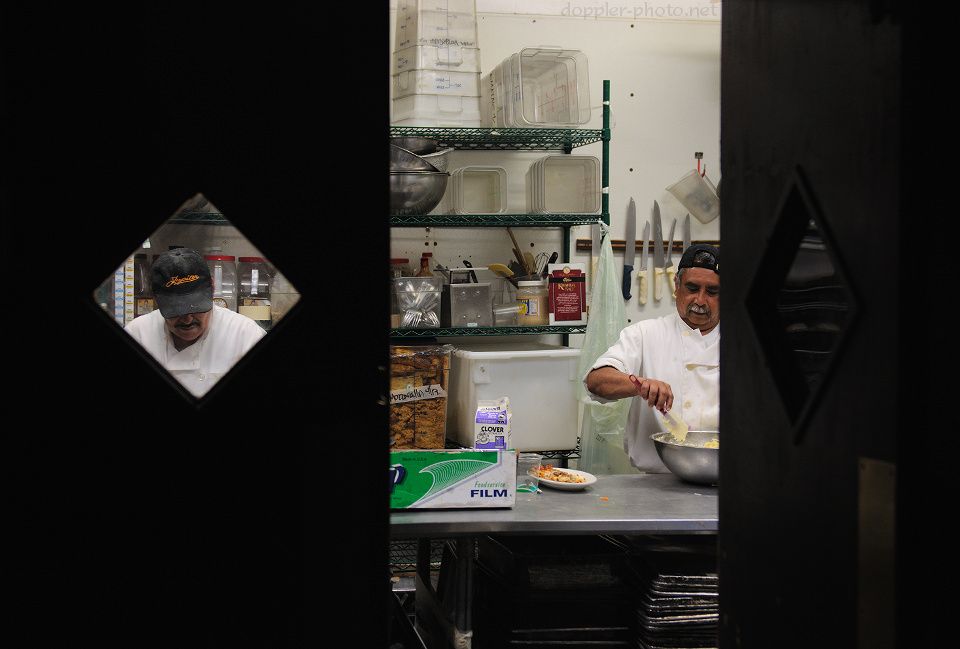