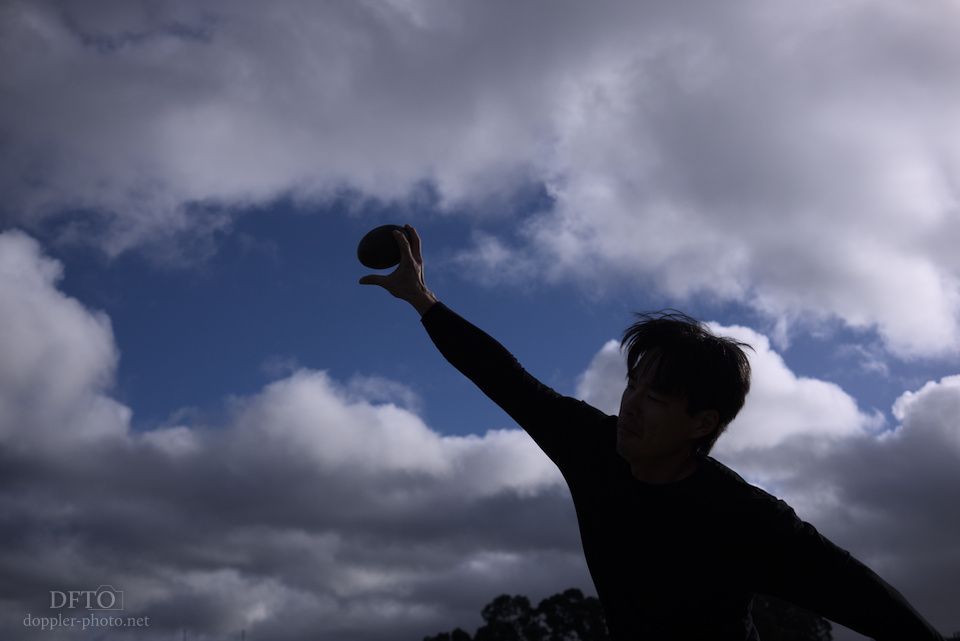 First and foremost, I'm a pole vaulter who trains with decathletes.  So when they switch to training for a different event, I switch to my camera, to try to capture a bit of what it's like to be a non-elite, post-collegiate athlete in the US.

My everyday camera is a Fuji X-T1, a mirrorless camera that can shoot either with the mechanical focal-plane shutter, or with an electronic-only silent shutter mode.  By default, it will shoot with the mechanical shutter up to the 1/4000s maximum, and then switch to the electronic shutter up to a final max of 1/32000s.  That's super useful for me, because I love to shoot at relatively open apertures (to control depth-of-field) in very bright sunlight.  Also, sometimes I'll try to expose for a silhouette in bright sunlight, while still keeping DoF in check.  In either case, the aperture is locked, I'm at base ISO, and shutter speed is all I've got left.

During one particular shot put practice, I exposed for a silhouette as my training partner Dan took two throws.  Of my various images that day, I took images of the two throws with the first at 1/4700s (shown above, with the electronic shutter), and the second at 1/3500s (with the mechanical shutter, shown below).

You'll note that only one of the two implements actually looks round.  This is one example of a class of artifacts known as rolling-shutter artifacts (click the link to see Smarter Every Day's amazing explanation and demonstration of it).

So it's actually an interesting set of tradeoffs.  Aesthetically, I really like the dark, brooding sky in the first image, but obviously, the misshapen hand and shot implement mean that it's not an image that I would use.  The second image is nice, in a sense, in that you can see Dan's face, but part of the point of a silhouette is to remove details completely — to create, in some sense, a caricature of a person, rather than a depiction of an actual person.

The first thing to do would be to switch the shutter speed to 1/4000s (instead of letting the camera control it).  That would have pulled back a quarter-stop of the difference, while staying on the mechanical shutter.  Although ISOs below 200 aren't marked on the camera (and tend to be less accurate and consistent than other ISO settings), I probably could have easily switched to ISO-LO1 to get back around a third of a stop (which would leave me slightly darker than the original image).  That would leave me with a tiny bit of leeway to play with the shutter speed again, or to lower (open) the aperture a tiny amount, to bring the depth-of-field in a tiny bit further.  Oh well; lessons for next time.