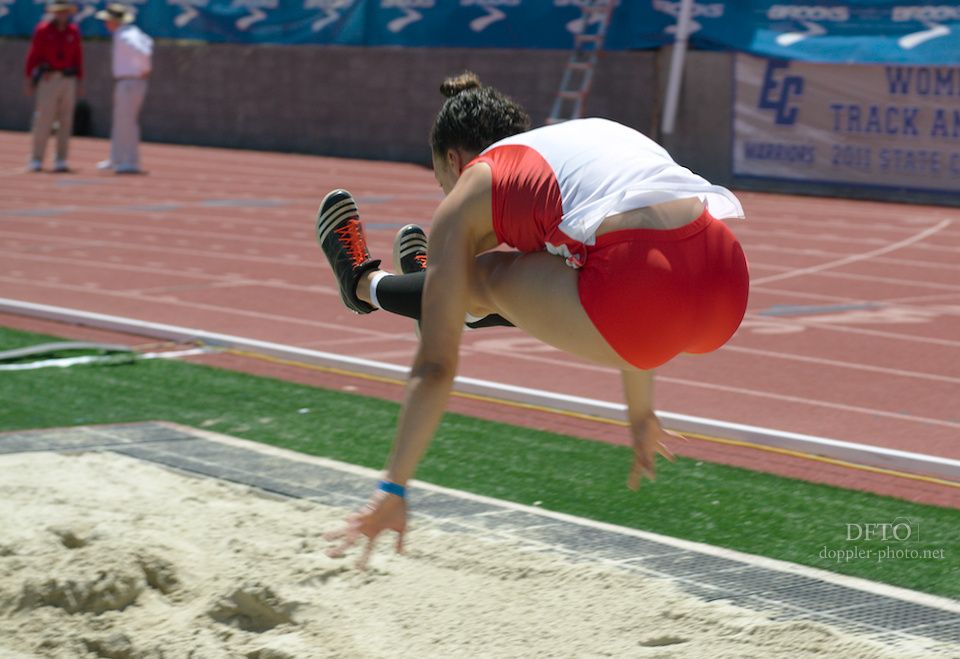 There are two ways to fly in track and field.  We covered "up" last time, with the vertical jumps.  The other way is "out."  The horizontal jumps are all about distance, and a close look at footwork and body position can provide some clues as to what's important and why.

First and foremost, long jump and triple jump seem pretty similar at first, but it's amazing the difference that two extra hops can make.  When you look at the sprinting events, it's fairly common for elite athletes of both genders to turn in great performances for similar distances (for instance, 100m dash and 200m dash, or 200m dash and 400m dash).  Likewise, in the distance events, 5k/10k doubles are also common across both genders.

By contrast, there's only one athlete in each gender who shows up in the top 25 for both long jump and triple jump performances.  From a high-level perspective, one hypothesis is that the long jump favors power, whereas the triple jump rewards efficiency, and it's difficult for a single athlete to do both power and efficiency extraordinarily well.

First you run…
The two events start off the same: you find your mark, do whatever quasi-dance you do to get into the rhythm of things, and take off down the runway.

Because there's no real constraint on the run — all that matters is that you get to the board with a lot of speed, some rhythm, and some consistency — there tends to be a lot of variation in running styles.  Some people walk into their run; some people rock back and start; others treat it like a sprint start, with no rocking or other extraneous motion; some people even start in a three point stance.  That said, the different techniques will tend to converge as the athlete approaches the board.

At the board is where the long and triple jump begin to part ways.  The penultimate (second-to-last) step in the long jump tends to be a fairly aggressive cut step (literally a stride that's cut off from its natural duration; kind of like tripping intentionally) or side-step.  The goal in either case is to lower the athlete's center of mass so that a small block (footfall landing in front of the athlete's hips, rather than directly underneath) on the last step will help to pop them up into the air.

The block here isn't anywhere near as aggressive as for high-jump or javelin — a good long jumper would still maintain enough forward velocity to easily clear the breadth of a high-jump pit, for instance — but as you can imagine from the picture, it can still be fairly aggressive.

Triple jumpers may also cut their penultimate, but it'll be drastically less aggressive.  The goal in the triple jump is to maintain forward momentum, while still jumping off the ground enough to cover distance and maintain nice, long phases.

…then you jump…
The juxtaposition between power and efficiency already manifests pretty clearly at the takeoff board.  You'll recall that a block happens when the footfall lands in front of the athlete's hips.  You can see the impact of that in their takeoff angles, which you can judge by how far their hips have moved forward by the time their foot leaves the ground. In high jump, for instance, you'd expect the foot to leave the ground with the hips still mostly above the takeoff foot (that is, with minimal hip displacement).  That shows you that the high jump athlete has mostly vertical velocity after the jump.

…then you jump… again…
Just like with the high jump and pole vault, body position plays a huge role in how well an athlete can long or triple jump.  With the triple jump, each "jump" is typically called a phase.  The athlete needs to both optimize how much distance they get off of any given phase, while simultaneously making sure that they keep the right body position for the subsequent phase.

The specific result of that balance will vary dramatically by athlete.  For instance, stronger athletes can take more aggressive jumps during their earlier phases, and still jump well during their later phases.  Other athletes will tend to hold back on the earlier phases, so that they can really put the power down on the later phases.  And power is the real key here.  Formally, power is a measure of the amount of work that can be done in a specific amount of time.

And when you think about it, the optimal amount of time for the foot to be touching the ground during the 2nd and 3rd triple jump phases is dictated by the athlete's forward velocity.  If it takes too long to land and rebound, then they they lose forward velocity and start to rotate forward, or they trip completely.  In the uncommon case that an athlete rebounds too quickly, they'll tend to pop up, and will again lose forward velocity.

So a good triple jumper will essentially calibrate the height and distance of their phases to how much power they can generate to maintain that momentum.  If they have excess power, then they won't jump as far as they could.  If they have a power deficit, then they'll tend to start over-rotating, which will cut their later phases short and undermine their forward velocity.

…then you fly…
After the takeoff in long jump, or after the third phase in the triple, you fly through the air.  But just like the high jump and the pole vault, you still have to be on the ball.  Many jumpers will extend their arms and legs to control their rotation rate and body position in midair.  Some will "run" in midair.  The landing is coming soon, and that's still an opportunity to gain — or lose — over a foot of distance.

…then you come back to earth.
The horizontal jump landing also has a variety of different techniques, and they often tie into the body position and the rhythm that was established earlier in the jump.  The final measurement is the shortest distance from the board to any mark left in the sand by any body part (including arms or hands), so the name of the game is to get your legs and feet out there, and then to use any of a variety of techniques to keep the rest of your body in the air long enough to land past that heel mark.

Some athletes (such as the one depicted) will land straight on, and just try to pull with their hamstrings so that their butt hits the same mark as their heels did.  A challenge with that approach is that you have to land sufficiently upright to stand up without using your hands — once the landing is "complete," you cannot touch the sand closer to the board than your final mark.  If you reach back to help yourself up, for instance, the jump is marked as a foul.

Others will land with their feet off to the side and try to push to the side to keep their hips in the air until they pass the heel mark.  After the landing, athletes using this technique will tend to roll forward, at which point it becomes a lot easier to stand up and leave the pit.


At the end of the day, even for the events where you take flight, the contact patterns with the ground convey a pretty clear sense of what's important to focus on for that event.  From beginning, to middle, to end, the athletes who can use their contact with the ground to their advantage will be the ones with a solid foundation to jump the best, throw the farthest, or run the fastest.  Is there more to it than that?  Absolutely.  In every single event.  But just like you can't build a building without some kind of foundation, track and field just isn't track and field without footwork. The complete Footwork series: