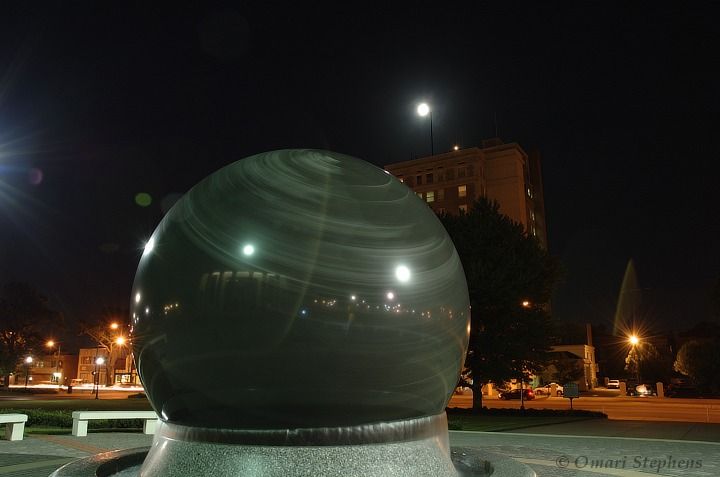 Nighttime photography is fun.  And it's even more rewarding when you try a bunch of things, and suddenly, everything comes together.  That's sort of the story of the image above, which I shot on July 31, 2004.  I was out driving around, looking for stuff to shoot around Richmond before heading up to MIT, and I stopped at the Museum of Science (well, the Science Museum of Virginia).

Out front, the SMV has a pair of Kugels, one of the earth, and another of the moon.  They're at the scale of 1 foot per 1000 miles, and I believe the distance between the earth and moon kugels is to the same scale as well.  They're tremendously fun to play with, especially since the earth kugel is the largest kugel in the world (if memory serves me correctly), at right around 25 tons and 2.6 meters in diameter.

Unfortunately, in the few months after I shot this photo, the ball developed a crack near the equator which grew to encompass the entire circumference, and was subsequently replaced (under warrantee!).  The new ball is still awesome, but is gray granite rather than black granite.

Anyway, the stage was set to come up with a cool image.  It was a reasonably warm middle of the night (just after 1:30 a.m.), there were throngs of motorcycles cruising up and down Broad St. (the street visible in the background), and it was a blue moon &emdash; the second full moon that July!

After messing around with composition and exposure a bit, and playing with the ball (a lot :o), everything clicked &emdash; the composition, the exposure, the rotation of the ball, (the reflection of me in the ball :o).  The exposure was 3 seconds at f/7.1.


Why do I like this photo so much?  I think one of the most important aspects of photography, for me, are the memories.  I often look through photos I took many years prior (like the one above), and they immediately evoke feelings similar to what I felt at the moment I shot them.  Happiness, pride, relief, disappointment, whatever; it all comes back.  Having looked at great photos other people have taken of me during emotionally-charged events, I don't quite feel it as much.

I think as a photographer, I'm constantly trying to create an image that captures what I think are the important aspects of a moment.  And so when I do it right, and make an image which I feel captures those details, I can look at it years later and recapture those details and that feeling of being right there.  As William Faulkner once said,
"The aim of every artist is to arrest motion, which is life, by artificial means and hold it fixed so that 100 years later when a stranger looks at it, it moves again because it is life."