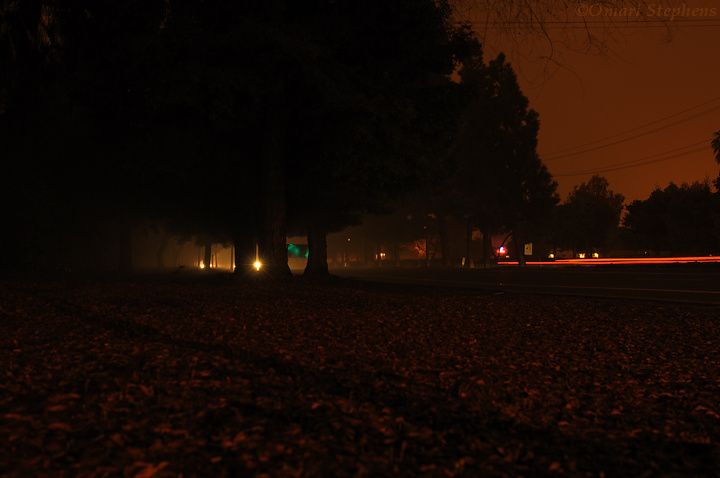 I saw some excellent long-exposure examples about a week ago.  Most of the exposures were about an order of magnitude longer than what I'm equipped to shoot, especially since I typically shoot without a tripod.  Regardless, they put "take some long exposures" in the back of my mind.

The perfect opportunity finally arose as I rode home in the middle of the night last night.  It was drizzling very slightly, and there was a very light fog that made things interesting.  Often on my way home, I see cool-looking lights when I ride over bridges — in certain conditions, the high angle makes their light dispersion pattern obvious and picturesque.

So, after what has become months of riding past, thinking "man, I should shoot that," I finally stopped, pulled out my camera, and did what I should have done long ago.  And man, was it worth it.
So here's how I got home yesterday, and some things I saw along the way.

The image above is looking to the north-west from between Central Expressway and the Caltrain tracks.  I've been waiting for a long time (years) for a good opportunity to capture the smoky-backlit-silhouette effect that I enjoy so much, and I finally nabbed one.

After shooting to the west, I stood up, turned around, and this is what I saw.  The bridge on the right is Shoreline Drive.  These sodium vapor streetlamps are the ones that fascinate me when I glance over on my way past.

As I mentioned earlier, I really like the conical dispersion pattern of the sodium lamps, and it's neat how the middle lamp illuminates the evergreen in the background.  And though it's practically invisible in this scaled-down version, the green light from the stoplight also reveals the gently falling drizzle.

Rather than follow my typical route home, I rode toward the east on Central Expressway and turned on Castro Street.  There were small bunches of people everywhere — a number of clubs live on Castro — but close shots of the individuals were difficult because of the darkness, and simple shots of lines outside of clubs seemed uninteresting.

On that note, one aspect of photography that I enjoy is that it's always possible to challenge yourself.  Put simply, Castro Street was incredibly boring.  What I've found, though, is that "boring" doesn't mean "uninteresting;" it simply means that the interesting shots are a lot harder to find than they might be in other situations.

And after nearly half-an-hour of searching, I finally found one.  Though I'm sure all the hunting made this find that much sweeter, I'm certain I would still love this image if it had been the first thing I stumbled upon.  There are multitudes of details that I like about it, but at a high level, the photo is appealing, yet still manages to capture the essence of being outside on Castro Street on a damp Friday night.  The colors, the long reflections, the tangible texture of the roadway, the people crossing the street in the dark.  Fantastic.

With the previous image in my pocket, I walked back up Castro toward my bike (though keeping my eyes open along the way).  As I was about to pack up, the textured appearance of the pole at the left of this image caught my eye.

I looked for something to put it with, and the "Sushi" sign was obvious.  I like how many textures there are in this image – the rough wall; the smooth, dull metal of the awning frame above the window; the shiny, contoured shrouds of the sign lights…  It also pleases me that it's practically monochromatic.  People tend not to see color well in the dark, and I find delight in using long exposures to reveal colors that someone with extremely sensitive cones might experience.

Photographers are notoriously bad at judging what other people will think of their photos.  I certainly have my favorites that are dear to me simply because of my own memories and experiences, rather than because of the contents of the image.  Sometimes, though, even different versions of an individual image can be incredibly tough to judge.

It is in this context that I want to ask for your assistance.  I have two photos.  I think they're both really good.  But I couldn't figure out which one I wanted to use to close this post.

So please, leave a comment (Anonymous is fine) and let me know which you prefer.  The first is option "A", the second is "B".  If you want, let me know why you prefer whichever you prefer (I'm definitely curious).  If you find the decision as difficult as I've found it, feel free to say that too.  Thanks!

To close, I recently stumbled upon an oft-quoted line from Sarah Williams' wonderful poem The Old Astronomer to his Pupil.  You can read the entire poem here.
"Though my soul may set in darkness, it will rise in perfect light;
I have loved the stars too fondly to be fearful of the night."