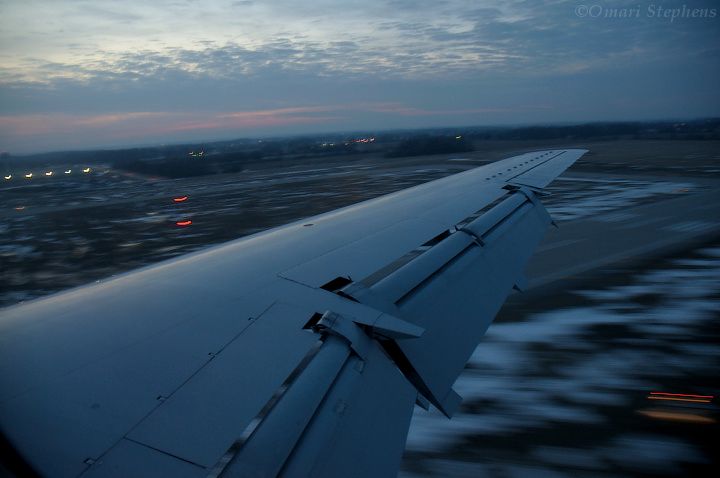 Since the new year and accompanying leap second, I've traveled a lot (well, a lot for me).  I started off in Puerto Rico, came home for a few days, and then went back to MIT for about a week, where I returned to the semi-nomadic roots of my college days.

In what was basically a lot more going-places then I've done in a while, I tried to keep my camera and wits about me, and I tried to stay curious.  In short, it worked.

And with that, here's my trip.  Grounded in photography.

My original flight from SJC (San Jose) to BOS through LGB (Long Beach) was canceled, thanks to inclement weather in Boston.  My rescheduled flight departed later the same day, with a stopover at JFK.

Despite being fairly tired, I was sort of restless on the flight.  This led to me taking photos out of the window.  Most of them were pretty blurry, but every once in a while, we'd catch some smooth air and I'd manage to hold especially still.

This is a four-second exposure.  The lights below are cities, the lights above are stars :o)  Unfortunately, there was enough ambient light in the aircraft to make a noticeable reflection off of the inner surface of the outer window.  I managed to attenuate it a bit by draping my jacket over the seat in front of me, but you can still see the oddly-shaped swaths of light in the heavens.

After landing at JFK, I had a three-hour layover before heading to BOS.  And I was hungry.  As JetBlue had only recently completed JFK's Terminal 5, their hub, everything was new.  I walked out toward the food area, and I was suddenly and simultaneously awed… stunned… amazed… floored… ceilinged… I don't even know any more.  Suffice it to say that this structure blew my mind.

So, basically, it's a ring of TVs, about 30 feet in diameter.  The TVs are all synchronized, such that things wander seamlessly from one screen to the next.  And the ring is supported by the most beautiful, over-engineered, hopelessly-complex-yet-somehow-working tensegrity I've seen, especially on this scale.

But the part that most surprised me wasn't that every single cable was taut, or that the circle was perfectly flat.  It was that nobody else seemed to notice!  They probably thought I was crazy for taking 78 different photos from umpteen different angles, and I thought they were equally crazy for not seeing the brilliance right above their heads.

Moving on, there were a couple birds in the terminal.  So I devised the title "Math is for the birds" and tried to find a photo to fit that title.  This is the photo:

Through the confluence of a bunch of circumstances that I won't go into, I ended up missing my original flight home and having to wait 24 hours to play again.  For as many times as Mom has told me to not miss flights, though, this turned out to be a blessing in disguise.

Walking around campus the night after returning from the airport, I stumbled upon some cool designs in the freshly-fallen snow.  And while hunting for a better angle to shoot the snow from, I happened past this quiet machine shop.  I like tools.  I also like self-portraits.  I also like my propeller-enabled Noogler beanie.  So the above is a photo that is or has all of those things.  Yay for the small victories :o)

So for all you who missed it, here's some snow.  This is in the courtyard surrounded by buildings 18, 16, 8, and 6 (I love the Harvard comma).  That's the line-art MIT logo in the background, and "IHTFP" in the fore.  I love this place.

So, since I'm in an MIT mood, here's a funny discussion on photography:
Monito: Who makes the sensors for the Nikon D700 / D3? D300?
Avi B: We don't know who makes it the D3/D700 sensors. The feeling I have is that Sony still fabs it, but it's a Nikon custom design.
Avi B: The D300 is a Sony supplied part that is customized to Nikon specs afaik. The D3X is supposed to be something similar.
eaglewolf: My somewhat reliable rumor-mill source believes it is Kodak, which I guess is possible. But as mentioned above, we just don't know yet.
Avi B: Maybe it's Intel! or TSMC! or AMD! Could be anyone! Just throwing out some fab names here
Jammy Straub: It's really a Sony Cell processor turned backwards.
Jammy Straub: Watch out if you set 10 D3's on a table they will start to talk with one another and harness the power of the network.