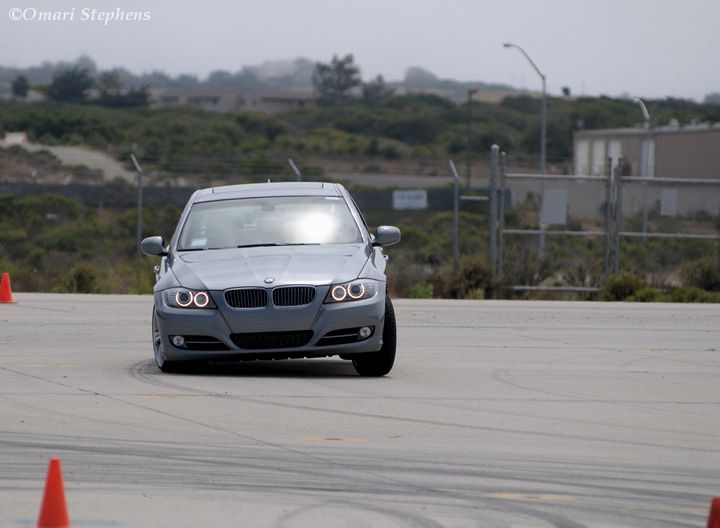 Every once in a while, I take a photo that is good beyond my wildest expectations.  Usually this happens when I'm on my game, and happen to get lucky so that other stuff falls into line as well.  If you can't tell, I really like this photo :o)

After years and years of watching all variety of motorsports on TV, I went autocrossing for the first time last Sunday.  The Golden Gate chapter of the BMW Car Club of America holds a monthly autocross at Marina Airport, and a friend invited me out.  I showed up and got my butt summarily handed to me by the rest of the cars in the non-BMW class; but I still had a good time.

This was also only my second time shooting cars in any sort of race situation, so I was curious how my photos would turn out.  It felt like all the photos were the same as I was shooting, but after looking at the results, slight changes in timing and composition made for significant differences in final appearance.

As always, I tried to pay attention to the details that were… not really behind-the-scenes, but at least details that a spectator might miss without keeping their eyes on the sidelines.  What do you miss by watching a race on television?

One thing that stood out was the attention to tire pressure.  On the road, many (if not most) drivers don't think about tire pressure until they have to pull out the spare.  By comparison, some people at the autocross adjusted pressures after nearly every run, often in an attempt to tweak the car's handling to better suit the course.  Here, one of the drivers preps a Volvo S40 that also ran in the non-BMW class.

Another thing you don't see: ride-alongs.  A skilled co-pilot can easily point out things a driver might not even know that they could improve.  For instance, knowing where to look is a crucial aspect of being able to safely drive fast.

Finally, you often miss the drivers' personalities.  This driver had an appropriate sticker on his helmet.  Another driver hung a small stuffed Domo-kun from his rear bumper.

That said, the magic of lots-more-photos continues. More photos!

Finally, here's a quote (not sure where I found it) that sums up my first autocross experience.  Cheers.
Good judgement comes from experience.
Experience comes from bad judgement.