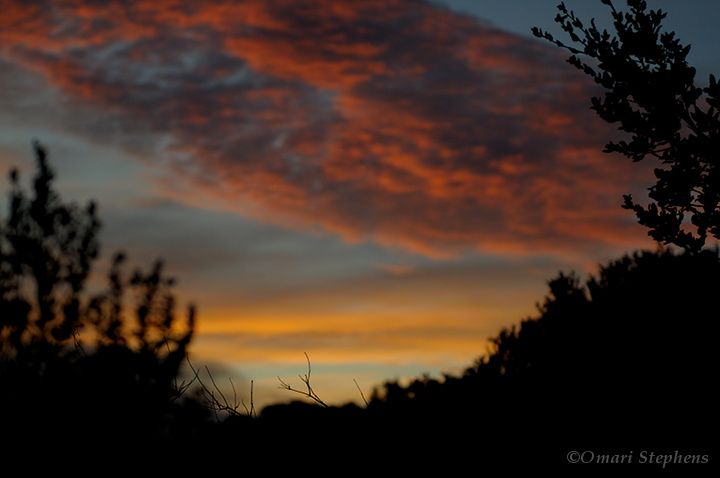 This past Thursday, New Year's Eve, there was a blue moon — the second full moon of the (solar) month.  The last time a blue moon fell on New Year's Eve was 19 years ago, in 1990, and the next is predicted to occur in another 19 years in 2028.  This 19-year cycle is related to the relative periods of the synodic (lunar) month and the solar year; if you're interested, the Wikipedia page on the Metonic cycle has a lot of info (including enough to derive all of this on your own).

That said, I sacrificed some sleep to head out and take some photos.  My first goal was to catch the moon at sunrise.  A confluence of issues (namely heavy cloud cover, early moonset, an hour of sleep, and the Snooze button) defeated me, but I was still able to find some neat photos, such as the one above.

At sunset, I had another chance.  After an epic battle of wills, I vanquished the weather when…

Well, maybe not so much.  What actually happened is that the clouds cleared up a bit, as I was fervently hoping that they would.  They did not clear up quite as early as I fervently hoped they would, however.  My original goal was to reproduce and/or improve upon this photo, which is one of my favorites from the past couple months.

Personally, I don't think it happened.  I really like the colors in this photo, and especially the separation between the bluish heavens and the reddish earth, but I really miss the simplicity and the clean composition of the other image.

If the moonrise had happened an hour earlier, or the sunset an hour later, then I probably would have had more to work with.  As it was, though, the composition felt forced, I ended up with a lot of extraneous stuff in the frame (like the tips of the trees), and it just doesn't seem to come together "like it was meant to be" in the same way that the first one does.  When I look at this photo, I say "neat;" when I look at its predecessor, I say "woah, awesome..."

So I trashed that plan and started experimenting.  Given the brightness of the moon compared to anything else, one obvious thing to try was a silhouette of some sort.  I dropped the exposure a bit and then futzed around with compositions and ended up getting this frame, which I really like.  I'm not sure if it's a 22° halo or some other atmospheric phenomenon, but the bluish appearance of the moon in this shot goes well with the "Blue Moon" theme.

After finishing up, I jumped on Caltrain to head up to the city for fireworks.  A couple minutes after I sat down, a loud group of folks who were clearly already enjoying their night came and camped out in the vicinity.  It was clear that one of the folks (on the right, in the photo) was farther gone than his friends, and at one point near the end of the ride they got fed up and took him to task in what turned into a short pushing match.

After the doors opened, the group disappeared into the night.  I next found these two having a smoke and talking outside the station.  The police were out in force throughout the station, so I presume things calmed down pretty quickly once the group got down to the platform.

At midnight, the wave of the new year swept past and continued on its way around the globe, leaving large swaths of fireworks in its wake.

After the fireworks finished, it was time to head back home.  I was surprised at the number of folks who were walking slowly, requiring visible concentration to keep from stumbling…

…or who couldn't really walk at all.  As this group of revelers passed, I heard the man in red comfort his piggyback rider, "not much farther, it's just one more block."


So that was my New Year's evening.  Hope y'all had a fun and safe celebration.

"
<Miraculous> does anyone know anything about routers?
<Rukus+> the most important advice i can give you
<Rukus+> do NOT rip it out of the wall when drunk and say you have defeated the matrix
"