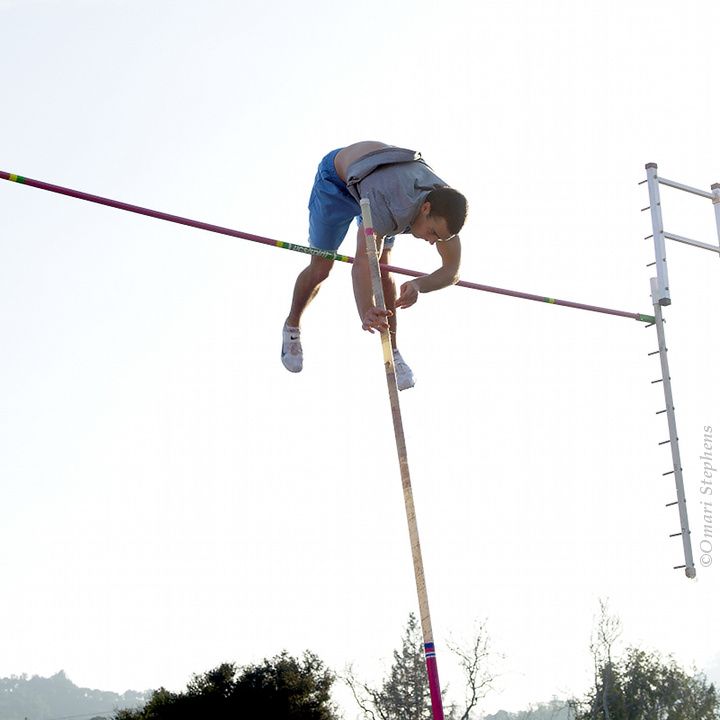 This past Sunday, the 14th, I and a bunch of other weird folks celebrated V-day the best way we know how — with some good 'ol pole vaultin'.  West Coast Vaulters has a number of regulars, as well as some folks who jump just once, or maybe only a couple times.  In addition to all the folks who jump, there are three coaches, who I'll introduce in due time.

Vault practice is always a good time, and this Sunday was no exception.  The sun shone brightly for the first time in a while, and people seemed to be in good spirits and jumping well.

Pictured above is Cameron Kroll, a vaulter for the Cal Bears, as he absolutely dominates some height that I'm unsure of.

Scott's dad, Bob, is another of the coaches, and as one might suspect from the relation, Bob taught Scott to vault.  Before that, Bob had a vault career of his own, during which he competed in the vault at the 1968 and 1972 Trials.  Above, Bob explains part of the vault technique to a parent while coaching her daughter.

And to take a short diversion, I think this photo captures a vault culture that I hadn't really experienced before getting here.  I personally started vaulting around 12 years ago in middle school in Texas.  Getting the early start was nice, but we in middle school didn't have much in the way of coaching beyond "how to get off the ground without getting hurt."

In high school, there was no vault coach the indoor season of my freshman year; the two older vaulters and I basically watched and coached each other.  Fortuitously, Bob Disse (a parent and a vaulter when he himself was in high school) stepped up to the plate for the outdoor season, and ended up staying on as a volunteer assistant coach during the three more years I was there.  By any measure, he volunteered well more than his due in time, dedication, and on more than one occasion, newly-purchased and/or -hand-crafted equipment.

That said, Coach Disse had the onerous task of creating a vault program from some old equipment that was hanging around, and only a single young vaulter (me).  It's a striking contrast to see an environment where there is infrastructure already in place, and where young vaulters are getting world-class coaching simply by virtue of being on the track team.

In addition to the younger folks, there are also some older folks who jump with us.  The man in the foreground, whose name I've unfortunately forgotten, jumps at Master's meets at age 57.  Seated in the back is Chris Smith, a local vault coach and also a Master's competitor at the spry, young age of 53.  One of Chris's pastimes is challenging the youngins to match his feats on the pull-up bar.

Coach number three, Jason Hinkin, snatches a $1 bill off the mat after winning a bet.  Also a former pro vaulter, Jason seems to know everyone in the vaulting world.  He asserts that vaulters were meant to toss footballs to each other while not vaulting, noting as evidence that he's tossed footballs with at least a few folks in the 6 meter club.

When not actively coaching, Jason basically tries to get everyone to laugh.  On Sunday, he also introduced us all to his new dog and the oft-proclaimed love of his life, Smashy Von ChickenSnacks.

This is Mélissa, a vaulter visiting from France while checking out schools.  Despite losing a bet for Jason's $1 bill in what must have been a crushing defeat, she brought the pain on her final jump, above, and definitively got on a pole she had been struggling with.

I invite you to check out the USATF's compendium of US Olympic Trials stats, running from 1908 through 2004.  And to conclude, here's a quotation from Matt Chisam, a pro decathlete whom I vaulted with over a few summers:
"sport is about crafting yourself one trial, one error, one triumph at a time."