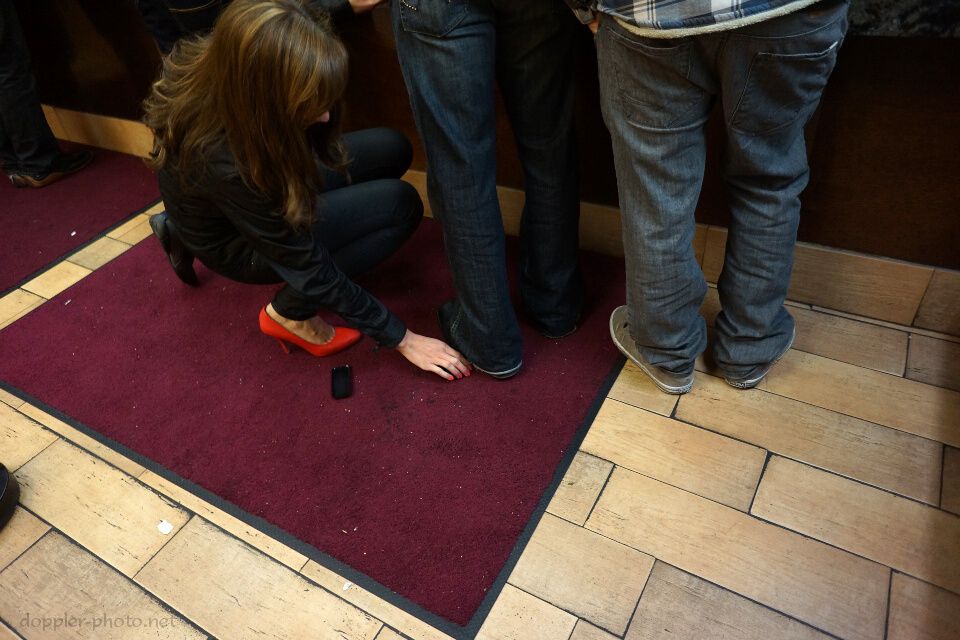 I had a pretty surreal experience at Pizza My Heart last night.  I arrived around 1:15 am.  The line was reasonably short, as is typical — it was around 5 minutes from when I arrived until I had my pizza.  The clientele already included a noticeable number of inebriated folks, but other than for a bit of wobbling and a dropped phone, the line moved reasonably quickly and efficiently.

Around 1:40 am, I finished my slices and decided to get one more.  By this time, the line was significantly longer, but was still recognizable as a line.

After about 5 minutes in the line, that all changed.  People were streaming through the doorway, sometimes in groups of 8–10 at a time.  The line stopped moving and I noticed folks trying to edge in unnoticed.  Someone took some ranch dressing, and then a guy a bit farther ahead in the line started licking his iPhone.  He explained to someone else that some ranch dressing had gotten on it but… wow…

Then this guy showed up out of nowhere and made a beeline for the front of the line.  After standing in the same place for 10 minutes, the people around me in line told the guy to go to the back.  In response, he pulled out a twenty and explained that he'd buy them a slice.

The guys behind me in line insisted that he go back and he said "I'll buy y'all a slice too."  This went back and forth for a bit as yet other people came out of the woodwork to offer their take on the situation.  He finally ended up staying, and the next thing I knew, he was ordering 7 slices of Pesto, plus a couple others.