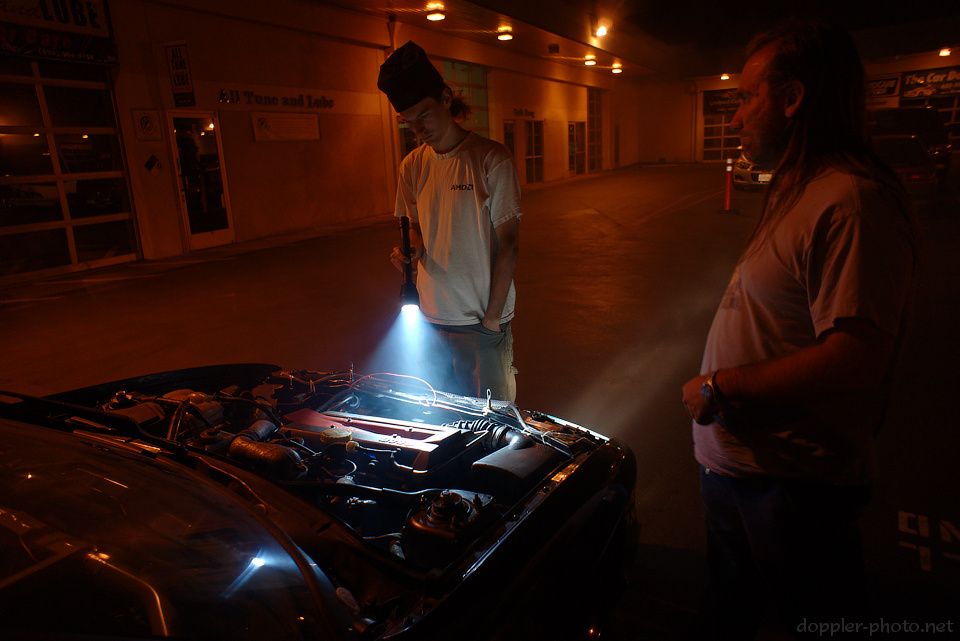 After four months with no engine and two wheels, we made a big push last night and got Saab Story Saabing again.  Not only does it roll, not only does it run, but it moves under its own power!  And it idles nice and smooth, like someone falling down an interminable flight of stairs…

Of course, that's not all…  It'll smoke up a room faster than you can say "Why'd y'all pick a Saab, again?"  Also, it spits like a Cobra, drops fluids like a heroin junkie, and has more exhaust leaks than cylinders.  (To be fair, if you look underneath the passenger compartment, it does look somewhat reminiscent of a top fuel dragster…)

This is what the ground looked like after we ran the car for awhile and then shut it down.  As we ran it, things gradually improved, to the point where the ground no longer gets damp when we fire it up.

Also, if nothing else, you'll note that the front-left wheel exists in this photo, which is more than we could say for a very long time.  We learned how to have nice things after graduating from The School of Slightly Softer Knocks.

That's all kind of an afterthought, though, because the car blows some pretty sweet smoke rings.  Welcome back, Saab Story.