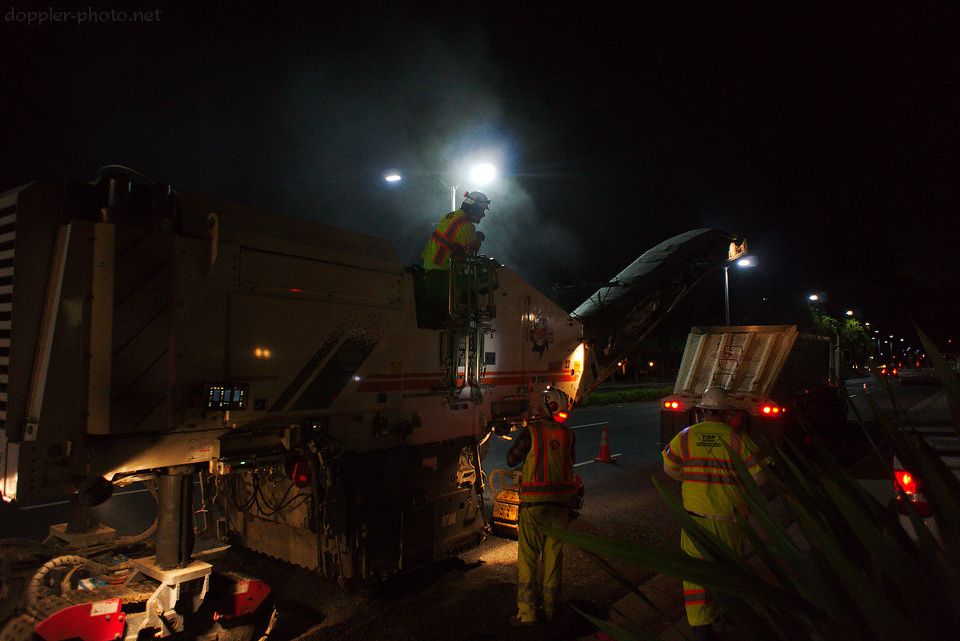 I love trying to appreciate the invisible work that goes into making our day-to-day lives possible.  Yesterday night, I spotted some road construction happening on El Camino Real and decided to stop and take some photos.  I also learned a lot, and I'll try to share that as well.

From chatting with a couple folks, I learned that the task for last night was to fix some areas with deteriorating pavement, in preparation for repaving entire stretches of the street this (Tuesday) evening.  Having frequently ridden my bicycle over at least one of the sections that they worked on last night, it was definitely it pretty rough shape.

The process starts by doing some research and marking the roadway for cut locations.  The markings include sections of the road that should not be cut, such as any area with a metal cover.

A cold milling machine is the device that actually removes the old pavement.  It's generally operated by two people, and the ground operator controls the cut depth, as well as fine maneuvering.  Here, the ground operator checks the depth of the cut with a ruler as the machine moves away from him.

As the milling machine moves along, it leaves behind some powdered debris from the old surface.  The workers used a skid loader, a backhoe with a special attachment, and shovels and rakes to collect, redistribute, and grade the powder as a kind of intermediate layer.  They then steamrolled it flat.

After the intermediate layer is steamrolled, trucks bring in fresh, hot asphalt to dump into the cut area.  I could feel the heat from where I was standing, 15 or 20 feet away.  The backhoe grades the new asphalt with the help of a couple workers with hand tools.

Here, a worker finishes a banana while waiting for the backhoe to finish grading the new asphalt.  As an onlooker, it's easy to forget that on-the-job nutrition is likely an important aspect of avoiding injury while working long hours.

Finally, the graded asphalt is steamrolled multiple times.  Even so, vehicle traffic will continue to compress the new pavement well after the actual construction finishes.

As mentioned, though, this is only preparation for the next step, planned to happen this evening.  Crews will take from 1 to 3 inches off of the entire width of the road surface and repave it.