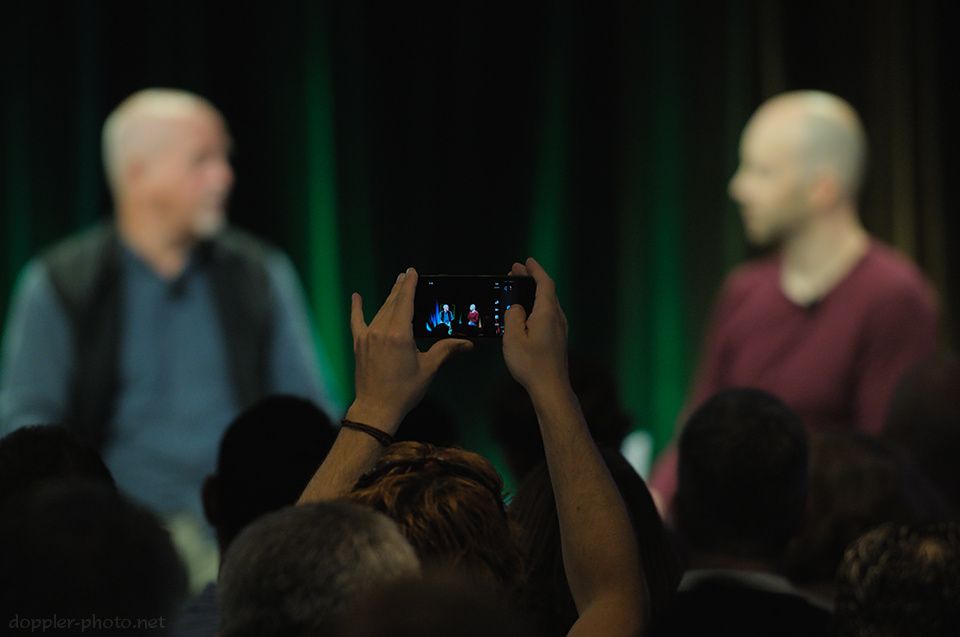 This past Tuesday, musician Peter Gabriel came to Google to give an interview about his Back to Front tour, celebrating the 25th Anniversary of the release of his multi-platinum album, So.  Gabriel discussed a variety of topics, including his past experiences, his motivations, his future goals, and his personal and professional interests.

Gabriel seemed to possess an uncanny grasp of science and technology, and of their potential impact in everyday life.  For instance, at one point, he described his peripheral visual stimulation idea (which he illustrates with hand motions in the photo).

He had found that when working to finish lyrics to a song, he became more productive in environments (such as on a train) where his peripheral vision was in motion.  He hypothesized that, evolutionarily, the proto-humans who were able to be creative while being chased may have been more likely to survive, and that their survival may have selected for some correlation between stimulation of the peripheral vision and creativity.

Toward the end of the interview, the moderator invited questions from the audience.  A line of people emerged behind the Q&A microphone, and as they each spoke in turn, the most common theme was gratitude — that Gabriel had somehow affected their lives.

One Googler, John (left), may have cut to the core of their sentiments by closing his question with, "[Mr. Gabriel,] thank you for your poetry."  The audience applauded as he walked back to his seat.