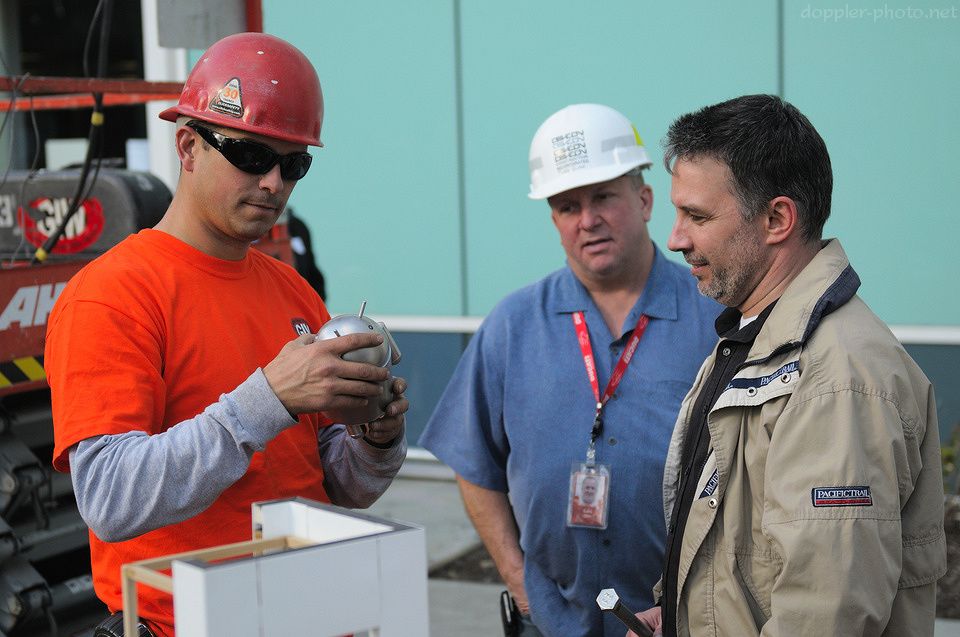 A couple weeks ago, I was fortunate enough to document the installation of a large, stainless steel bugdroid statue into the entryway of one of the Android buildings at work.  The sculpture was conceived by artist Diana Pumpelly-Bates and industrial designer Steve Petrushka, and was assembled and finished by MetalWorks Unlimited in Union City, CA.  In the photo, Johnny (left, site foreman) and Petrushka (right) discuss the installation as Les (center, project superintendent) looks on.

Matt (left) and Johnny (right) discuss the plans for some braces to be installed on the structural steel frame in preparation for the bugdroid's arrival.

Johnny loops a lift strap through the internal structure of the bugdroid prior to lifting.

The bugdroid sculpture hangs from a telehandler and a come-along as it nears its final position.

After a three-hour lifting process, Sam (center) and Johnny finally install the bolts at the bugdroid sculpture's lower mounting point.

Correction [12 Feb 2013]: I originally misidentified the right-most person in the first image as Francisco.  He is actually Steve Petrushka, industrial designer for the bugdroid sculpture.  Francisco, who was also involved in the construction process, appears only in the Featured Photos. Click here to see the image gallery for this post. Click arrows to scroll. Click any image to jump to gallery