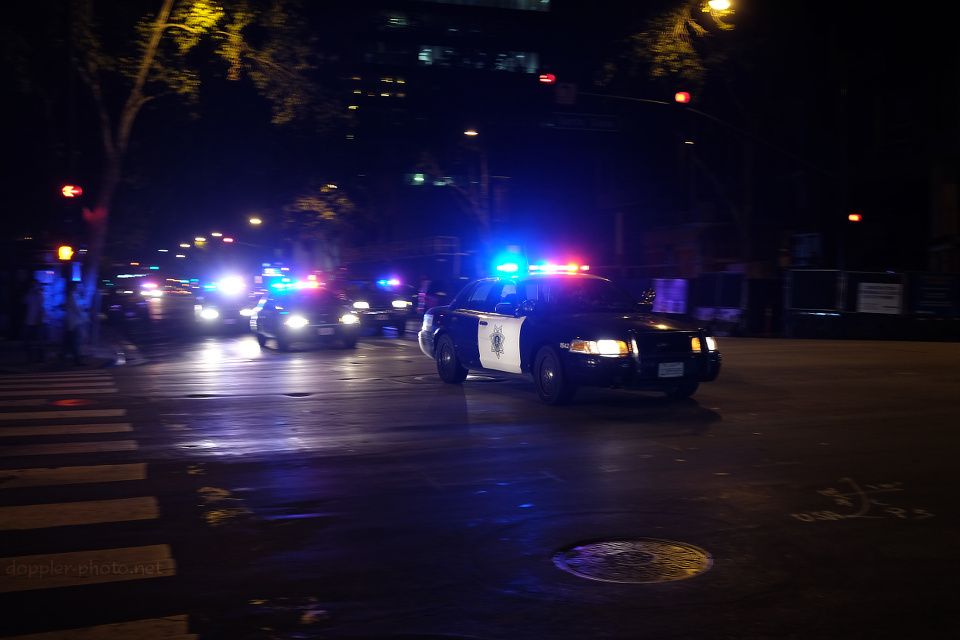 I've long had the desire to keep a good camera with me wherever I went.  But I never found an option that combined small size with nice controls and great image quality until I picked up the Fuji X100 back in 2011.  Since then, I cycled through the Sony NEX-7 and NEX-6, and I've currently got a Fuji X-T1.

But the best camera is always the one you've got with you, right?  So I've endeavored to keep the X-T1 (like the NEX-7 and X100 before it) on my person at all times, and I've been rewarded with opportunities to take unique photos in unexpected situations.  Enjoy

Late night.  Hungry.  What to do?  Find something that's still open in San Jose.  So I went, ate, and was on my way back to my car when I noticed a bunch of cops with their lights flashing, heading away from me.  Hmm...

Then they turned around and did it again.  Near as I could tell, they weren't really going anywhere, so much as just making their presence known.  I imagine it was related that the time was 1:45 am, so likely pretty close to last call.

Dinnertime in Flushing.  I was walking around Flushing, Queens, NY when I spotted a bus driver having dinner in a parked bus at night.  I wonder if it was the beginning or end of his shift...

So I had given up on getting any decent photos until I was reminded that flaming drinks are something of a specialty there.  After watching a performance at an adjacent table, I had the settings dialed in to get this shot as the server carried the flame upward with some sort of fast-burning fuel.

Red Crawfish, San Mateo.  We were lucky to be seated near where the servers were stationed, and I watched as they grabbed plates and silverware, and cut sections off a giant roll of the paper that they used for disposable tablecloths.

Some friends invited me to lunch at Dropbox, up in San Francisco.  As I stood in line, with a plate already balanced in one hand, I was able to use the tilting LCD screen to compose this shot with the camera hanging down at my waist.  I immediately spotted the awesome, slightly ragged symmetry of the seating arrangement when I got in line, but I had to wait until the line moved forward a few meters for the composition to actually capture that symmetry.

After getting home and reviewing those photos, I realized that the man in red had noticed me awkwardly fumbling with the camera (which I didn't realize at the time).  I had taken three photos, and this was the only one where he wasn't watching me.  Worked out, though.

I was having lunch at work when I heard the sound of a very large helicopter outside.  I looked, didn't see anything, and went back to my meal.  Then I looked again and was surprised to find a V-22 Osprey essentially patrolling the sky around our campus.  I was surprised at how much noise it made while approaching, and conversely, at how quiet it sounded as it flew away.  Rumor was that President Obama was in the area.

And, back to NYC (but Manhattan, this time).  We went to a hand-made noodle place, and I was able to take some photos as one of the chefs pulled the noodles.  I've often watched, but this was the first time I've had a good opportunity to photograph as well.  And if you're wondering, yes, the noodles were really tasty :o)

Do you remember this fellow's name?  I know he's from Charlie Brown, but that's all.  Anyway, 'twas painted on a wall in Downtown Richmond, VA.