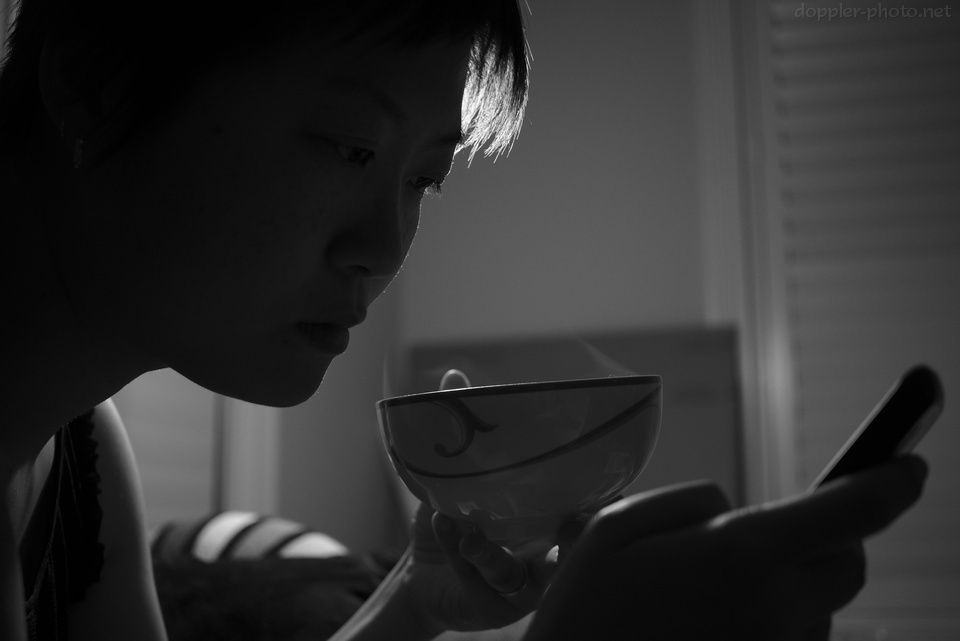 There were a bunch of options here that all looked reasonable, but in the spirit of pushing outside of my comfort zone, I decided to focus on nuance and subtlety.  One of the things I learned (which I already had some idea of) is that my main editing monitor has very poor grayscale rendition at very low luminance levels.  The really low blacks tend to go away completely, and the levels that it does display tend to have color casts.  By comparison, when I look at the same image on my second monitor, the color rendition is completely neutral.

Even so, I tried to use a light touch with the Tone Curve module to bring out a little bit of shadow detail on the near side of L's face.  It's hard to tell if it worked or if it didn't — one one monitor, you can _barely_ see the slightest hint of her large, shiny earring.  On my other monitor, I can see the faint hint of the outline of her ear and her haircut, and you can see that she's wearing a pair of earrings.  That's about what I was going for, so I'm going to call that a tentative success.

I also used the Monochrome module in an attempt to massage her phone reflection into the other reflections in the bowl.  It's still there, but it doesn't draw your attention the same way that it does in the original.

Finally, I tried a bunch of things to pull down the translucent highlight from the edge of her thumb on the bowl, but I didn't find anything that worked.  The main challenge was that I _really_ like the stark contrast of her backlit hair, and the levels in the hair are pretty similar to the levels on her thumb.  Clearly something I need to keep in mind while shooting.