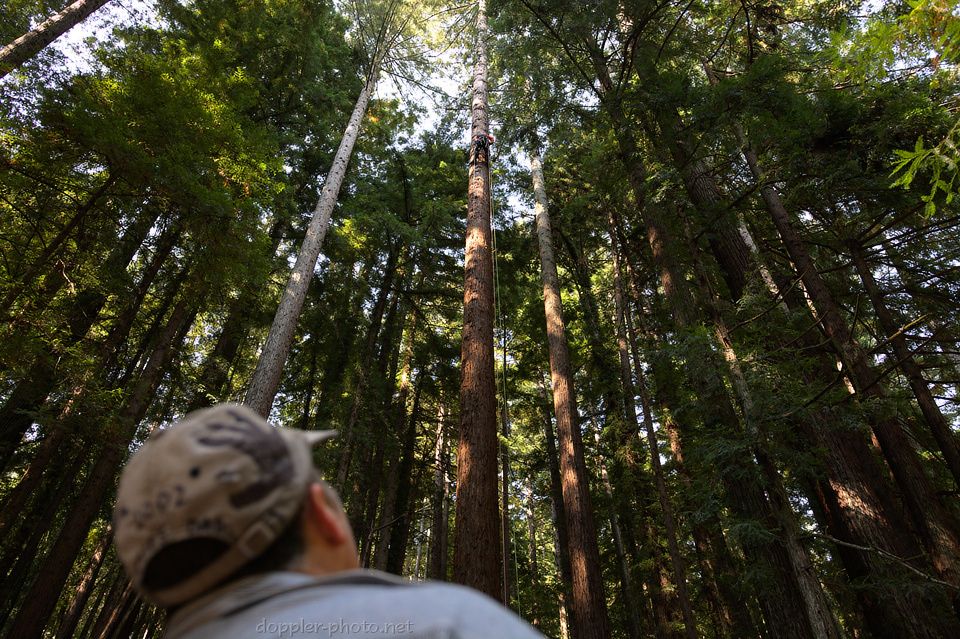 Imagine you want to cut down a single, very tall tree.  How does it work?  How do you do it safely, without damaging surrounding trees, and in a way that allows the lumber to be put to use when all is said and done?

When the opportunity to witness just such an adventure came across my radar, I jumped on it.  I've always enjoyed watching people work, and this was a great chance to see someone work in a way that was completely different from what I'm used to.

Mark (bottom, in the photo) owns land somewhere in the forests of the Santa Cruz mountains.  As part of a road rerouting project, he brought in his friend Matthew (top; a professional arborist) to cut down what we would later discover to be a 200-foot-tall Redwood tree.  Mark mentioned that he plans to use his small sawmill to mill the logs from the tree into lumber, and to use the lumber to build a deck for a house overlooking the site.

In the photo, Matthew continues climbing after setting a rope 75 feet above the ground.  The rope gave him a handy re-belay (aka rope transfer) point, in case his fixed top rope ended up too short to reach all the way to the ground.

On previous days, Matthew had cleared out some of the lower-hanging limbs on the tree.  This particular day, he would essentially climb the full tree twice.  On his first pass up, he finished off the limb removal, followed by a lunch and rest break back at ground level.  He rigged a 2-to-1 rope system for the top half of the descent/ascent — he would climb twice as much rope to travel a given distance, but he'd only need to use half as much force.

In the photo, he grabs his fixed top rope to keep track of it (and, presumably, to keep it from twisting around the tree) on his way down for lunchtime.

And what's lunchtime without some goofing off?  Matthew told us that this was the tallest tree he had ever climbed, and the effect of being the weight at the bottom of a 150+-foot pendulum was that he could practically fly by pushing gently off of the trunk.

And as he sat down for some food and rest, some of the kids took turns on the rope as well.

After lunch, Matthew gave us a short course on chainsaw safety: how to hold it, how to start it, how the safety mechanisms worked, and what to wear to keep safe while using it.  Then he cut down a short tree to demonstrate, at ground level, the hinge cutting technique that he'd be using to cut down sections of the actual trunk.

Once that tree was cleared out of the way, he grabbed his gear and started his second climb, this time using a variety of rope ascent devices that made the job more efficient than the first climb.

Finally, once he was situated near the top of the tree again, he dropped a rope and had us attach his saw.  Time to move the tools into position and get to work… The full Timber! series: