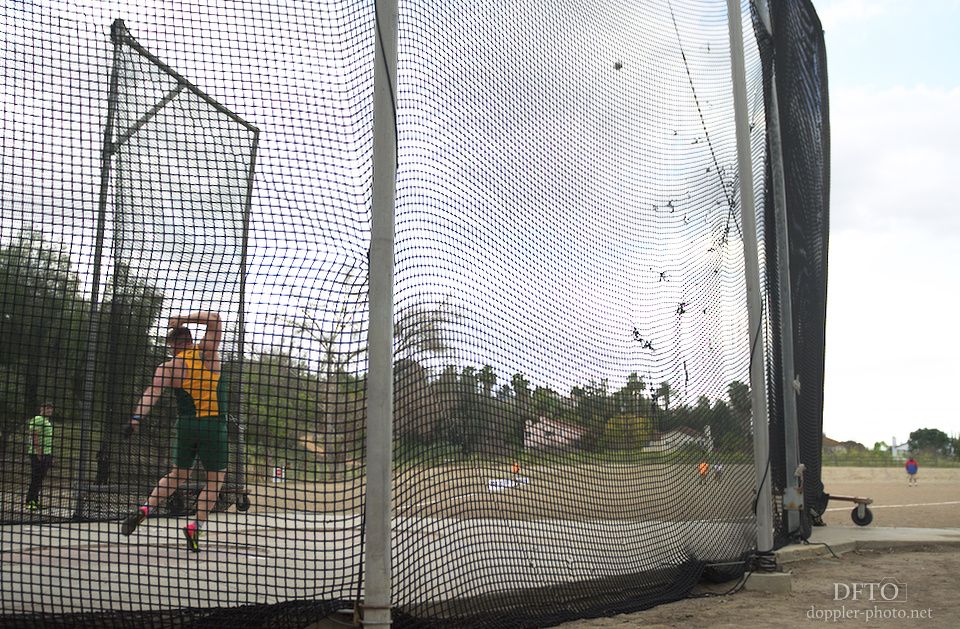 The throws require a controlled kind of crazy.

For me, that's one trait that distinguishes them from the other event groups in track and field: you have to unleash the beast in an instant, but then you have to settle just as quickly.  In every throwing event, there's a limited throwing area, and the athlete has to start and finish at rest, under their own power.

In practice, it tends to look like a raw explosion of energy to launch the implement, followed by a dance with the laws of physics to come back to a controlled stop.

Now as a reminder, I am not a thrower.  I've watched and studied the events a fair bit, but some of my analysis could still be off the mark.  With that said, this time, we'll dive into the footwork in three of the four outdoor throwing events, the hammer throw, shot put (two techniques), and javelin.

(Or click here to read the first part of the series, "Running and The Heel".)

As also seen in the opening image, the hammer throw is a rotational event where the athlete spins with a metal ball on a tether and releases it towards the outfield.  The ball has to land in a certain angular area ("the sector") for the throw to count, and the distance is measured from the throwing circle.

Hammer is the only event where the athlete spends a significant amount of time on the rim/edge of their foot.  As with many of the throwing events, the two feet have very different purposes throughout the execution of the throw.  The rim of the left foot (for a right-handed thrower, who will spin counter-clockwise) traces the ground, moving the athlete from the rear of the circle to the front.  During the period where the athlete has both feet planted, some athletes will roll onto the ball of the left foot, while others will balance on the inside (medial) edge of that left foot.

The right foot has periodic contact with the ground, but the athlete can only accelerate the hammer during those contacts.  With every revolution, the athlete lands with the right foot in one position, and then pivots that foot as the revolution continues, before lifting off to rotate again for the next cycle.  That planted-foot pivot is a recurring pattern across the concrete-circle throwing events (hammer, shot put, and discus), and benefits from the flat, rubber-soled, slightly-convex shoes that the athletes wear for those events.

Maintaining balance after the release is a challenge because the tether lets the ball spin so far away from the athlete's body.  You can see that the athlete sits back into the spin to counter-balance the inertia of the hammer, and so the athlete's center of mass changes dramatically right when the implement is released.

The shot put is another event with a significant rotational component.  There are two main techniques for shot put: the spin, and the glide (discussed later).  That said, in each of the concrete-circle throwing events, the motions involved always include a rotational component as well as a translational (linear motion) component, though the orders and magnitudes will vary significantly.

The athlete starts at rest, facing away from the sector.  From that point, the spin technique begins with a kick, sweeping the right leg around (for a right-handed thrower, who will spin counter-clockwise) to pick up some rotational inertia.  The sweep also leads into the translation from the back to the front of the circle — the athlete will hop as they rotate in mid-air, with the goal of landing on the ball of the right foot, facing away from the sector again.  Once the left foot lands, the athlete will pivot both feet as they rotate the hips and jump into the throw.  (It also happens that the footwork for the discus, the fourth outdoor throwing event, is somewhat similar.)

The key to the spin technique is to convert that rotational motion of the body-and-shot system into linear motion of the shot by itself.  And more generally, all of the throws involve accumulating energy in the athlete's body, and then trying to transfer that energy as completely as possible into the throwing implement.

By comparison, the glide technique starts with an energetic straight backward push.  Some athletes (as depicted) rock from the toe to the heel of the right foot, while others push off directly from the toe without the heel coming down.  After moving backwards in midair, a glider will land in a position that's fairly similar to someone using the spin technique.  From that point, they'll finish the throw similarly: pivoting both feet, rotating the hips, and jumping into the actual release.

As the athlete jumps into the release, their momentum, just like the shot's momentum, will tend to carry them out of the circle and towards the sector.  So the next step is the recovery, where they stop their body from following that tendency.

Shot put is one of only two events (both of them throws) where athletes traditionally use the top of their foot as part of the event.  In the image is a left-handed thrower using the spin technique (so rotating clockwise).  He would have thrown with his left foot back and right foot forward.  The recovery starts with a rapid foot reversal that follows the rotation of the body — a clockwise rotation tends to move the left foot forward and the right foot rearward, but the athlete forces it.

In a sense, the left foot trails the body's rotation at first (while planted on the ground), which allows that leg to add force to the rotation.  And then the athlete pulls that foot forward fast enough to catch up to and leap-frog the body's rate of rotation, which now allows that leg to push against the toe board to both slow the rotation, and to let the remaining rotations die down within the confines of the throwing circle.

So the more force the athlete puts into the throw, the more challenging it becomes to recover effectively.  And beyond a certain point, that recovery isn't going to be successful.

That is the distinguishing trait I had mentioned earlier.  In every throwing event, it takes some amount of restraint to avoid a foul.  Or, at least, a balance between the ability to explode into motion and to brake back to a stop.

The javelin feels like an event that is part throws, and part (horizontal) jumps.  Like the jumps, it takes place on a finished runway rather than a concrete surface, and allows the use of spikes.  The throwing area has a limit line before the sector, but like the jumps, the length of the run-up is only practically limited by the space available in the stadium.  Javelin throwers tend to be lighter and physically smaller than athletes in the other throws, in part because the event benefits from outright speed, rather than just from quickness and explosiveness.

But the similarities to other throws are also numerous.  First and foremost, the name of the game is to accumulate energy in the athlete's body, and then to transfer that energy to the implement as completely as possible.  During the throw, the athletes will tend to use the side and top of their rear foot (which would be the right foot for a right-handed thrower) to stabilize their body.

Moreover, the momentum remaining after that energy transfer will tend to take the athlete's body past the limit line.  So just like the other throws, a javelin thrower needs to perform a recovery so that they don't foul past the line.  Which means that even though the specific kind of motion is different, the athlete still has to balance the ability to move quickly with the ability to come back to a controlled stop.  They must start, and end, at rest.

In the third and final part, we'll be talking about the jumps.  Click here to subscribe.The complete Footwork series: