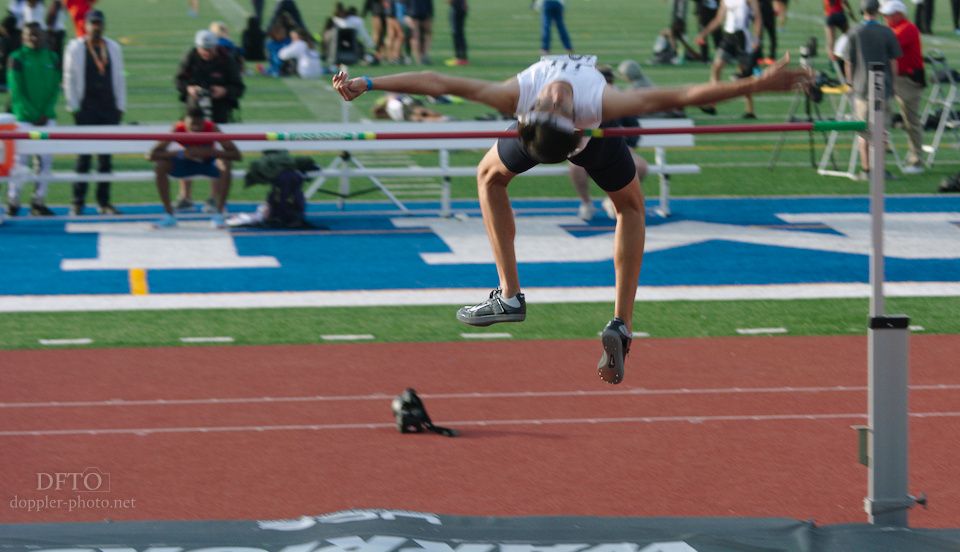 The jumps are just like the throws, except this time, your goal is to fly. But just like with the throws, athletes combine specialized footwear with finely-honed footwork to make that magic happen.

All four jumping events share a pretty basic pattern: first you run, and then you jump. The four events break down into two major categories: the horizontal jumps (long jump and triple jump) and the vertical jumps (high jump and pole vault).

The horizontal jumps are all about taking a limited number of attempts and achieving the furthest distance from a set limit line ("the board"). As with the javelin, if you take off from past the board, you foul the jump and your distance doesn't count. But if you jump from behind the board, the room you leave to spare doesn't count toward your total. So the name of the game is to jump from as close to the edge of the board as you can, without going over.

The vertical jumps differ in that you have an unlimited number of attempts to jump as high as you can. You are eliminated from the competition after you miss three consecutive attempts. If you clear extra height over a low crossbar, that doesn't help your total — style points don't count — but if you pass to a height that you can no longer clear, then your last cleared height is your final measurement. So the risk-balancing aspect is still present, but it has more to do with fatigue and technical repetition than with the ability to hit a precise mark on the ground.

First, you run…
The high jump differs from all of the other jumping events in that the run-up is usually curved like a "J" — the approach starts with a straight section, followed by a curve. Different athletes may run from the right or left side of the apron. During the curve, high jumpers tend to place a strong emphasis on leaning away from the pit/crossbar, which creates a body posture that also differs dramatically from every other jumping event, where the focus is on running tall and maintaining an upright torso position. The body position ends up being fairly similar to the body position in the javelin throw.

…then you jump
It's no coincidence, then, that after javelin, high jump is the only other field event that typically involves shoes with spikes on the heel. And in both cases, the reasoning is the same: the goal is to create an aggressive change of momentum, in a single step, that drastically reduces your forward velocity (converting it to upward velocity in the high jump, and implement velocity in the javelin).

…then you fly
After the jump is where the jumping events part ways with the throws. You'll remember that the throws involve a recovery, to keep from crossing the limit line of the throwing area.  But how well or poorly you recover doesn't have a direct impact on the distance of your throw.

In the jumps, you work just as hard before the jump as you do during and afterward. For instance, in the high jump, your legs don't just dangle — they allow you to control your body position in midair. A lot of the best high jumpers can pass over the bar even though the center of mass of their body will pass under it, and careful timing and execution of leg movements is part of what allows that to happen.

The pole vault is unique among the jumps in that it also involves an implement — the pole. The run is fairly similar to a long jump or triple jump run (or the straight section of the high jump approach), except that the athlete has to run without swinging their arms, because they need to carry the pole. Some vaulters will slide the pole on the ground and pump their non-dominant arm as they run, but that technique is fairly uncommon.

The footwork involved in the pole vault takeoff tends to be pretty straightforward — a lot more of the technique in that moment involves the arms and torso. That said, you'll note that the heel is already elevated here. A good pole vaulter will tend to "run off" off the takeoff — they'll definitely jump off the ground, but the transition into the air will tend to be fairly smooth.

And again, after the takeoff, there's still a lot of work to be done. As with the high jump, pole vaulters use their legs to control their momentum in midair. Actual vaulting techniques have a bunch of variations that differ pretty dramatically, which is too much to go into here, but as a general rule, the vaulter will keep their body fully extended to transfer energy into the vaulting pole, and then will pull in their legs to rotate quickly into the inverted position.  You'll see a similar pattern show up in the horizontal jumps as well.

Speaking of which, this post ran longer than expected, so tune in next time for the actual final post, on the long jump and triple jump.  Click here to subscribe.The complete Footwork series: